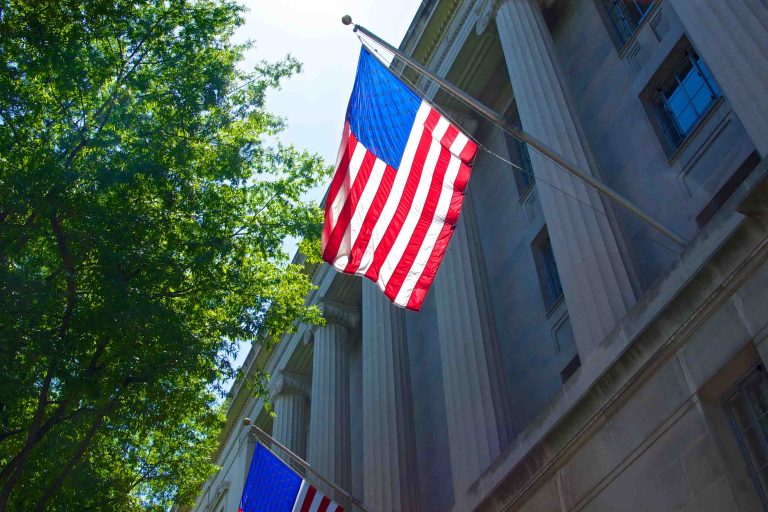 U.S. flag outside the Department of Justice (Image: Kkistl01 via Dreamstime)

The political and diplomatic tussle between China and the U.S. does not seem to end and there are new developments almost every week. In the latest development, the U.S. Department of Justice (DOJ) has indicted 5 people, accusing them of targeting Chinese dissidents based in the U.S.  The DOJ accused the five people of attempting to suppress criticism of the Chinese Communist Party (CCP). They were also slammed for trying to interfere with the campaign of a congressional candidate. The DOJ has filed 3 distinct cases for the five people involved. The allegations include trying to bribe U.S. tax officials and planning to assault a congressional candidate.

Assistant attorney Matthew Olsen, who leads the National Security Division of the DOJ, said in an official statement: “This activity is antithetical to fundamental American values, and we will not tolerate it when it violates U.S. law. The Department of Justice will defend the rights of Americans and those who come to live, work and study in the United States. We will not allow any foreign government to impede their freedom of speech, to deny them the protection of our laws or to threaten their safety or the safety of their families.” (Radio Free Asia).

The CCP’s harassment of its critics

In the first case, the DOJ accuses China’s Ministry of State Security agent Qiming Lin of hiring a private investigator to impede the campaign of a Brooklyn congressional candidate. The candidate was identified as Yan Xiong, who took part in the historic Tiananmen Square protests. He is a vocal critic of the CCP. He also took part in a 2015 pro-democracy protest in Hong Kong. Lin reportedly hired an investigator to locate damaging information about Yan Xiong. He even tried to create a fake scandal about the candidate. Lin also tried to set up a plan to attack Yan personally. If the allegations prove to be true, Lin may be sentenced to 10 years imprisonment.

The second case was slapped on Shujun Wang for spying on the Chinese diaspora in 2015. Wang allegedly gathered data on activists, human rights leaders, and dissidents and passed the findings on to the CCP.

The DOJ said about Wang: “The victims of Wang’s efforts included individuals and groups located in New York City and elsewhere that the PRC considers subversive, such as Hong Kong pro-democracy activists, advocates for Taiwanese independence, and Uyghur and Tibetan activists, both in the United States and abroad.” (Radio Free Asia). If his crimes are proven, Wang may end up spending 20 years in jail.

In the third case, the DOJ alleges 62-year-old Fan “Frank” Liu, Matthew Ziburis, and Qiang “Jason” Sun were working as PRC agents trying to bribe tax officials. Liu is the owner of a NY-based media entity and hired Ziburis as a bodyguard. They were guided by Qiang Sun. Liu also tried to masquerade as an art dealer showing interest in the artwork made by a dissident. Liu and Ziburis were taken into custody and three charges were slapped on them. Based on the judicial investigation outcome, they may have to serve between 5 and 15 years in jail.

Standing up to CCP interference

It is not the first time that the DOJ has expressed concerns about the CCP trying to meddle in the work of dissidents in the U.S. In fact, the Obama administration warned China back in 2015 about its agents trying to cause problems in the U.S. Matthew Olsen said the cases indicate attempts by the CCP to silence dissenting voices in the U.S., but the U.S. govt is not going to put up with such acts of oppression.

The FBI’s Counterintelligence Division’s assistant director Alan E. Kohler, Jr. said: “Whether it is disinformation from a Russian intelligence service, efforts to silence a U.S.-based journalist by the intelligence arm of the government of Iran, or harassment by the government of China’s Ministry of State Security, the FBI will protect the freedom of everyone within our borders.” He said local law enforcement agencies and private investigators should report such acts to the FBI. (CNN).