Did You Know That Male Emus Raise the Chicks? 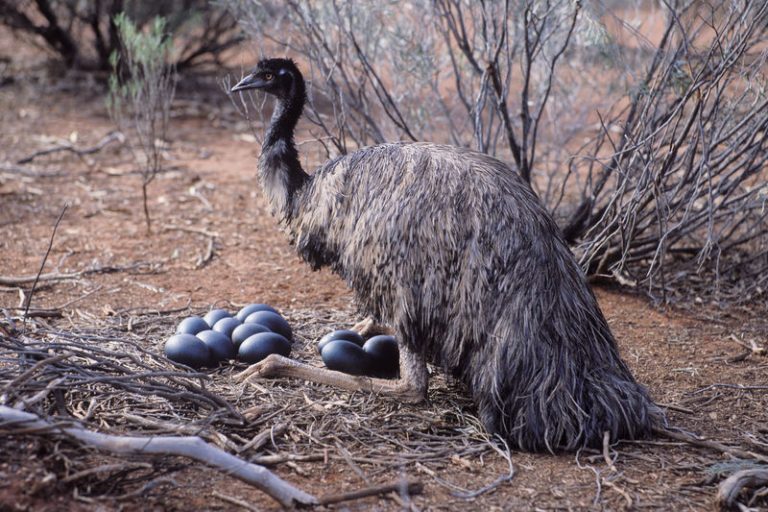 Emus are really unique because it is the males who sit on the nest to hatch the eggs. (Image: Johncarnemolla via Dreamstime)

The animal kingdom is full of nuances that can leave you stunned and intrigued. Male emus fall into this category. It is not uncommon to witness acts of care and protection for the offspring among certain animals. You may have seen female animals and bird species playing proactive roles in safeguarding and feeding their offspring. However, in some avian species, it is the task of the male birds to look after the chicks. One such example is an emu. The big, flightless bird makes headlines for many reasons and male emus managing the young is one of the reasons.

Both female and male emus mate with several partners

Emus are not like regular birds by any means. They are tall, look rather menacing, and have those enormous feet. Their mating and parental care patterns can be erratic. They usually appear monogamous. However, in the mating season, female and male emus mate with several partners. With most other birds, looking after the eggs, feeding the young chicks, and taking care of them are handled by the mothers.

Ecologist Julia Ryeland, who has spent a lot of time analyzing the lifestyle and habits of emus, says: “Emus are really unique in that they have male-only parental care, which is only true for about two percent of bird species. It’s a really fascinating thing for a bird to sit on an egg for two months and then to look after this chick for 18 months with the potential that it’s not even his baby.”

Ryeland spent quite some time shuffling emu eggs across the nests to know about the success rates of a nest. Ryeland says the birds are big-sized, but they are not very smart or harmful by nature, which made her work easier. She said: “Emus will try to get up in your face to scare you, but as soon as you’re taller than them and a bit more scary, they just sprint off. They’re not very brave. An emu farmer once said to me that they can do two things — they can run, and they can think. But they cannot do both at the same time.”

After shuffling the emu eggs in several nests, Ryeland waited. After two months when the eggs hatched, she realized nests with the maximum number of eggs did not really lead to a maximum number of chicks. The emu population is on the decline in some parts of Australia. Learning about their mating and lifestyle will help scientists in finding the root causes and fixing them. A reduction in the emu population will not be good for the ecosystem. They act as good seed dispersers. University of Tasmania’s emu researcher Matthew Fielding supports this view.

There are some other bird species that are known for assigning the task of caring for the young to male birds. After laying the eggs, female emus either leave the nest to the male bird or stay nearby. Some female emus start looking for another male partner, too. The male emu incubates the eggs for almost 2 months. A male emu remains busy looking after the eggs and chicks most of the time. The male birds do not get enough time for eating and drinking, leading to weight loss. After the chicks are hatched, the male emus become quite aggressive and they may even chase away females that come close to the chicks.

Some male emus are capable of looking after more than two dozen chicks single-handedly. Once, a male emu was spotted leading a pack of 40 chicks in South Australia’s Eyre Peninsula!