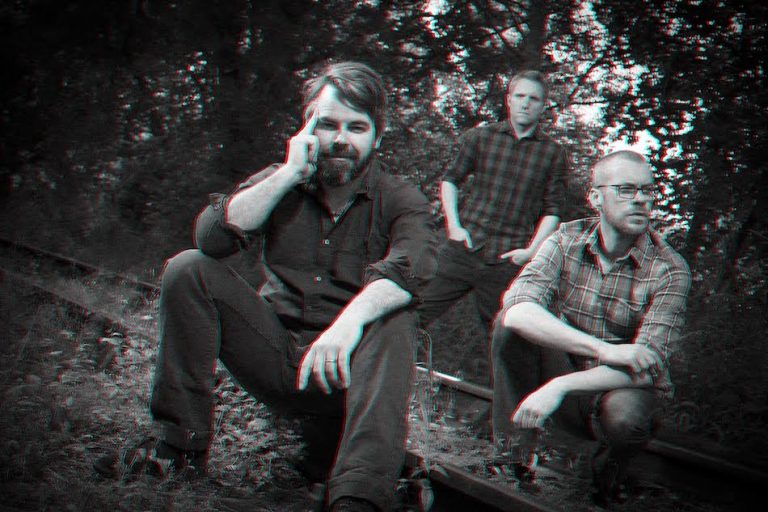 The song begins with the sounds of a melodious guitar and a strong sense of journey — my mind has already cracked open the car window and I enjoy the breeze on my face and the open road ahead. The song develops with a guitar-led blend of delays, reverbs, and vocal harmony, as well as an indescribable burst of energy among it all. The lyrics have a touch of wisdom and by the end of the song, you won’t want to be sitting down. Well maybe, but just to rest from dancing.

Prince Bishop frontman Ben Trenerry kindly took the time to answer our questions and let us know the intriguing inspiration behind Roman Roads.

1. Can you introduce yourself and the other band members and let us know where you are from and how you all got together?

Prince Bishop comprises Ben Trenerry (myself), with Bob Douglass and Mark Bell. We have known each other for years and have played together in various bands in the past and have just instinctively stuck together. We’re all based in and around the North East of England. I’m lucky in that both those guys have stuck with me through the ups and downs involved in pulling together our album All is Due (which is out later this year).

2. How would you describe the band’s music?

It’s rock music but with a lot of heart. I try to imbue all the songs I write with a sense of great hope and positivity.  Sonically, I try to take the listeners on a journey.

3. What was the inspiration behind ‘Roman Roads’?

I wanted to write a song about how the best lessons in life are those which are hard-won. We live in a world of easy wins, but nothing worth having is easily attained, is it? We live in the north of England, where there are still many Roman roads. What characterizes them is how straight they are, built to be the shortest distance between two points. The idea behind the song is that I wanted to make the point that in this fast-moving world, we’re always in such a hurry to get to our destination; we rarely stop to look around. We can miss the detail and the beauty of the ride.

4. What first got you into music?

My dad was always very passionate about music when I was growing up, both playing and listening, so I guess it rubbed off. Some of my earliest memories are of learning to put on a CD or a vinyl album on my own, flicking through the various albums and CDs that my parents had, staring at the cover artwork and pictures of the musicians in wonderment. And then putting the music on and being just absolutely transported by what I was hearing, fueling my imagination.

5. Can you tell us about the creative process for Prince Bishop?

Songs will typically start with a melody or a chord sequence. I tend to be drawn to music that is evocative and beautiful. Occasionally, they come to me very quickly, but more often than not I work on them for years — coming back to them time and again until they are just right.

Once I have an idea, I tend to just let the song guide me really. If I still my mind when I am playing, (which I am able to do because I meditate every day), the song just tells me where it wants to go. Once I have a basic structure, I’ll put words to the melodies and hone and refine the song until it is ready to play with the band.

Once we have the arrangements, we record the guitar, bass, and drums live to capture the essence, or performance of the song, (which is often lost in this world of laptop recording and electronic), and then add other layers of instruments, vocals, backing vocals, etc. It’s a very organic process.

6. Do you sing in the car or shower? What songs?

Ha, I’ll sing wherever I can get away with it to be honest. It’s nice to sing in big halls, to hear your voice bouncing around the room. A few weeks ago, I visited a local medieval castle and they had a very small chapel attached.  The sounds and reverberations in the room were heavenly. I could have stayed there singing all day; the sound and resonance were incredibly special with the room itself acting as a sound and tone amplifier.

7. How have you navigated COVID and lockdowns. Has it impacted live gigs? And have you been able to find a way to turn things into a positive?

We haven’t gigged for a few years due to the lockdowns. It has been a little frustrating because we had an album due out just before, but it has been delayed for nearly two years now, but thankfully coming out this summer. I didn’t play or write much during lockdowns because I didn’t feel particularly inspired to do so. In hindsight, this was a mistake, I should have played more. Like most musicians or writers, when I am not playing or creating, I do not feel myself. Thankfully, I am now fully back into the swing and we hope to play some gigs around the album launch and beyond.

8. What is on your playlist right now?

I’m a child of the 80s, so the new Tears for Fears album is a real treat. It’s encouraging that those older guys are still being as inventive with their music in their 60s.

9. If you could change anything in the music industry, what would that be?

I think technology has changed the world in so many ways and none more so than within the music industry.  Everything is about short-term gain and short-term profit, but great music takes time to develop and there isn’t a lot of support in that regard from record labels nowadays, so most musicians are on their own, having to fund their own development.

Streaming technology also means that “the album” is becoming something of a dying art, as more people just listen to singles, which I think is a real shame.

I love a 45-minute album which takes the listener on a journey, through highs and lows — but you don’t get that within a 3-4 minute song.

10. What is the best advice you’ve been given?

Just be yourself, you can’t be anyone else. I think this applies very much to songwriters. I think you can learn from other people, but you have to develop your own style.

11. What’s next for Prince Bishop?

Our new single Roman Roads is just out and our album All is Due follows later this year. We’re really excited for people to hear it, it’s been a long time coming.