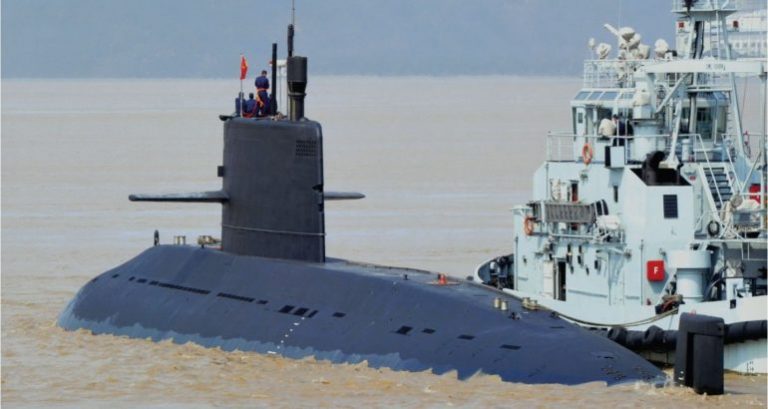 Thailand’s purchase of a Chinese-made Yuan-class S26T submarine worth 13.5 billion baht (US$408 million) has stalled over the manufacturer’s failure to obtain German-made diesel engines as stipulated in the contract. China had a plan to sell three of its Yuan-class submarines to Thailand; however, only one was purchased.

The submarine was built by China Shipbuilding & Offshore International Co. The problem is the company failed to obtain a diesel engine from Germany for use in the vessels. MTU Friedrichshafen GmbH manufactures the Series 396 V-16 diesel engine, which can trace its roots to WWII German U-boats. Globally, over 20 naval forces have equipped their submarine fleets with these extremely reliable engines.

The root cause of the failure to obtain an engine is a European Union (EU) arms embargo that was imposed on China years earlier. The arms embargo was originally slapped on China by the EU following the Tiananmen Square massacre in 1989.

The race in East Asia is heating up, with multiple new submarines being constructed. Japan launched the first of the new Taigei-class. South Korea launched the second KSS-III-class boat. Taiwan officially started construction on its own Indigenous Defense Submarine (IDS) program. Vietnam has purchased half a dozen Kilo-class subs from Russia, while the Philippines are negotiating with France to acquire Scorpene-class diesel-electric sub (SSK). Singapore, Indonesia, and more recently Malaysia have been deploying submarines for years.

Naturally, Thailand does not want to lag in the area of submarine development, but the problem arose because Beijing did not consider the EU arms embargo before agreeing to the Yuan-class S26T submarine deal with Thailand. This issue was also overlooked by the Thai government.

Analysts, however, pointed out that MTU Friedrichshafen GmbH has supplied engines for Chinese destroyers and submarines since 1993. However, this deal failed to sail through because of its association with Thailand.

Philipp Doert, Germany’s Federal Military Attaché to Thailand, said: “The export was refused because of its use for a Chinese military industry item. China did not coordinate with Germany before signing the Thai-China contract, offering German MTU engines as part of their product.”

Janes defense industry publications analyst Jon Grevatt said: “If this submarine wasn’t being exported to Thailand, no one would know about it and therefore it would go ahead. But the fact that it is being exported, it’s in the news and is cause for the German government to say, oh, no, no, no, we’re not allowing that. You can’t deny that the system is a defense system.”

There is a possibility that the submarine contract between Thailand and China may be revised to accommodate the installation of a Chinese-manufactured engine. However, the Thai Royal Navy is not convinced that the replacement engines are as good as the German-sourced model. Given that Beijing didn’t disclose the German restrictions when it dealt with Bangkok, they have a good reason to cancel the contract and get a refund.

International political analysts have said the growing military ties between China and Thailand are not being seen by the U.S. and its allies as a good thing. In fact, U.S. political veterans dubbed the Chinese submarine deal a gross slur to Thai-U.S. security agreements.

These agreements include the 1954 Manila Pact of the former Southeast Asia Treaty Organization (SEATO), which, together with the Thanat-Rusk communiqué of 1962 and the 2020 Joint Vision Statement for the Thai-U.S. Defense Alliance, constitutes the foundation of the U.S.-Thai defense alliance.  In 2003, the United States also designated Thailand a major non-NATO ally.