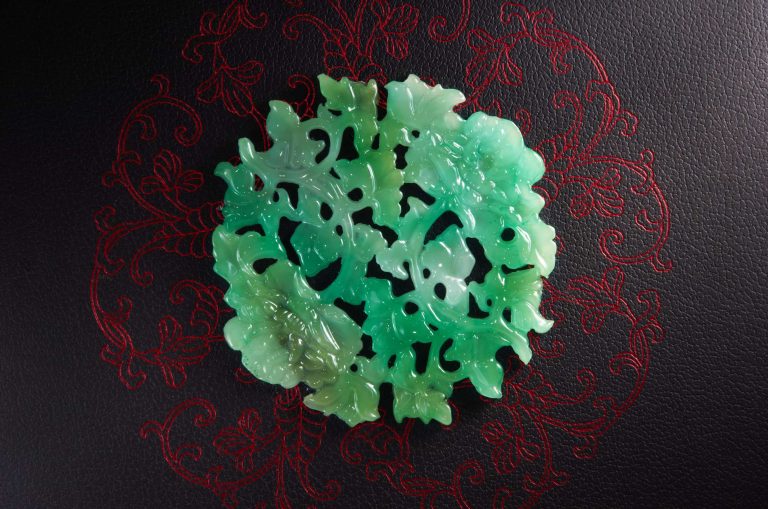 Jade is viewed as the most valuable of all precious stones, considered heaven’s essence, and carved into various articles. (Image: HongChan001 via Dreamstime)

Jade communicates a sense of mystery. In Chinese, jade refers to a fine, beautiful stone with a warm color and rich luster, skillfully and delicately carved. It symbolizes nobility, perfection, constancy, and immortality. For millennia, it has been an intimate part of the lives of Chinese of all classes.

Jade is viewed as the most valuable of all precious stones, considered heaven’s essence, and carved into various articles. When polished and carved, specific cultural characteristics are attributed to jade.

This precious stone is a very durable material that has been fashioned into tools, sculptures, jewelry, gemstones, and other objects for over 5,000 years. It was first used to manufacture ax heads, weapons, and tools for scraping and hammering because of its toughness.

Then, because some specimens had a beautiful color and could be polished to a brilliant luster, people started to use this for gemstones, talismans, and ornamental objects. Although most people who think of the stone imagine a beautiful green gem, the material occurs in various colors including white, lavender, yellow, blue, black, red, orange, and gray.

According to an ancient Chinese legend, the phoenix and the dragon are animal deities that were the life source of family clans. For this reason, this precious stone was often used as a material for carving phoenixes and dragons worn as ornaments. Those ornaments symbolized noble bearing and are the origin of the Chinese saying: “The gentleman’s morals are like jade.”

In ancient China, burying jade objects with the dead was common. The living wear it as a symbol of their moral integrity, and it accompanies the deceased to comfort their souls.

Over 4,000 years ago in China, significant quantities of jade utensils were often laid over or around a casket, particularly the pi representing the round heaven and the ts’ung signifying the rectangular earth. They were a symbolic link for communication between heaven and earth, exchanging between man and the spirit world.

Later, jade articles were carved especially for burial with the dead, based on the idea that its qualities of nobility, perfection, constancy, and immortality would prevent the physical body from decay.

Jade ornaments have remained popular up until the present day. Purchasing, wearing, and giving these items as gifts is very common. It is viewed as an ideal gift for couples making a mutual commitment and for one’s children when they get married. Even now, the Chinese retain the idea that it can protect one from misfortune and bring good luck in addition to being beautiful.

Jade is an essence produced through the natural forces of rivers and mountains over eons. However, if it is not skillfully cut and polished, there is no way for the potential richness and luster that people prize to express. The Chinese have a saying, “If Jade is not properly cut, it cannot be made into useful utensils.” Therefore, cutting is an essential step in producing articles from this precious stone.

Today, the art of carving this precious stone has reached yet another apex in its development. No longer is this stone for the exclusive use of emperors and noblemen. Just about everyone has the means to own and wear it.

Beyond maintaining its historical role, jade artistry has developed with creativity and skill and has become an indispensable part of everyday life. It remains an eternal symbol of China’s magnificent civilization.