The ‘Portraits on the Silo’ Art Tour (Part 1) 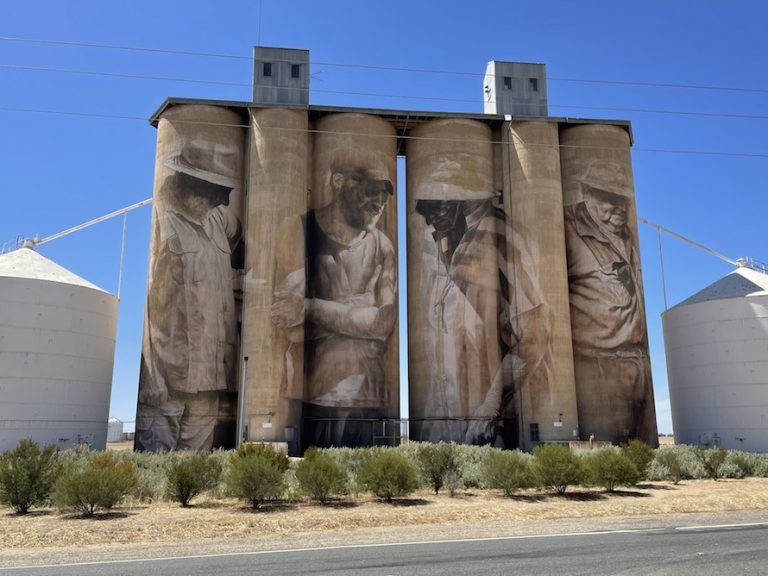 Guido van Helton was the first silo artist to complete his realistic portraits in the Brim Silo Art Tour in the early part of 2016. (Image: Trisha Haddock via Nspirement)

A silo is a gigantic storage container that keeps grain fresh and clean before transportation. Prior to the construction of silos in Australia, wheat was kept in hessian bags and they were loaded onto rail wagons. When quantities of bagged wheat exceeded the limit of the wagon and there was no more room, the bags were kept in the railway yard. Losses occurred due to rodents and insects infesting the grain along with rain causing dampness and rot. To solve this problem silos were built.

Silos first came into use in 1918-1919, with observers from all parts of Australia coming to learn how they work. Silos were then constructed all along the railway lines in most parts of the country. However, the upgraded development of agriculture and the improvement of grain storage made these old silos no longer suitable and many were shut down. Most of these silos in Australia still stand and are about 60 to 100 years old.

The Brim Active Community Group, located as it is in the state of Victoria’s outback amidst a farming landscape, foresaw the potential to use these old silos as an artist’s canvas. They knew this could enhance their region by giving them a tourist attraction for visitors and also give the locals something to enjoy. The silos are etched into Australia’s history and were much appreciated by the early farmers. Grain Corps donated the silos while Juddy Roller and artist Guido van Helton promoted the silo painting to the global media. Thus, the Brim Silo Trail was created.

The Brim Silo Art Tour can be viewed in any order. It is a good idea to plan your tour and to calculate the distance between each silo before you go. The Brim Silo Tour incorporates 11 Victorian rural townships. For those situated in the Melbourne area, the closest silo painting is at Runpanyup, being 3 hours and 35 minutes by car or about 190 miles (316 km) from Melbourne’s city center.

In 2017, artist Julia Volchkova completed two silo murals. Before deciding on her subject, she met with the locals of Runpanyup. She drew inspiration from the youth in the township and their passion for team sports. By capturing the youth culture in the rural Australian region, the realistic portraits display strength, hope, and companionship.

‘And when I was working, people brought tables, chairs, baskets with sandwiches. They drank tea and watched while I worked. It was so sweet.’

Julia Volchkova was born in Nizhnevartovsk in Siberia (Russia) where she learned how to draw before she could write. She studied classical painting then, moving to St. Petersburg in 2010. The Russian realist painter IIya Repin inspires her. Julia prefers to paint murals for a cause that is close to her heart. As a young girl, she dreamed of coming to Australia to see the lifestyle and culture of the country. At the age of 29, an opportunity arose for Volchkova to visit Australia, and while here, she produced her painting on the steel twin silos.

Sheep Hills is an isolated rural farming district and is 20 miles (35km) from Rupanyup. It’s a 25-minute drive on Sheep Hills-Minyup road, and when you turn into the entrance to see the silos, the view will take your breath away. The wondrous portraits of the Indigenous elders alongside young children look to me as though they are talking to you. The artist, Matt Adnate, painted the faces to show the Australian Aboriginal culture of the elders passing on their traditions to the younger generation.

Adnate began as a street artist painting graffiti in Melbourne in the mid-2000s and learned the chiaroscuro — or light and shade — technique. His inspiration came from his meeting with the Barengi Gadjin Land Council during which he found his passion was to paint Australia’s Indigenous people. In his artwork, his intention is to encourage and move hearts to bring about change and widen the knowledge of those who see his paintings for as long as his work still stands.

Brim is 22 miles (36.5 km) from Sheep Hills and it will take around 25 minutes to drive there. The township name “Brim” is an Aboriginal word meaning spring. It is situated by the Yarriambiack Creek. It is a farming region with an escape to the bush for camping at Redda’s Park, which has powered sites, BBQ grills, and amenities.

Guido van Helton was the first silo artist to complete his realistic portraits in the Brim Silo Art Tour in the early part of 2016. He cleverly captured the different personalities in detail of three male and one female farmer. Each portrait uses a translucent aerosol technique showing the hardship and the resilience of the farming community.

Once he completed the work, it gave the Brim residents a new outlook adding more energy and optimism because they could now see a brighter future for their region. Lights were installed for the spectacular display to be viewed at night, as well as during the daytime.

Guido van Helton was born in Canberra, Australia in 1986 and moved to Melbourne at a young age. He gained a Bachelor of Visual Arts degree from the Southern Cross University specializing in printmaking. Later, he adapted his work to the contemporary large-scale mural movement trend that had emerged. Learning about different cultures and their connection to the landscape along with his interest of photography, travel, and architecture have all helped his art develop and continue. He was nominated for the Sir John Sulman Prize at the art gallery of NSW for his mural on the silos in Brim.

Roseberry is about 17 miles (27.9 km) from Brim and it takes about 20 minutes to drive to the silos. Rosebery was named after Archibald Primrose, the fifth Earl of Rosebery, who traveled Eastern Australia in 1883-84 and then later became Prime Minister of Britain in 1894. Rosebery was a thriving small farming village from the 1940s to the 1960s. Today, you will see few locals; instead, you will be surrounded by empty plains while gazing in silence at the amazing portraits on the silos with other tourists following the Silo Art Tour.

Australian Artist Kaff-eine met and befriended the people in the farming district of Roseberry before painting. She was inspired to bring to life the silos with a painting of a young lady as a farmer representing the future with a sheep at her side to illustrate the hardship farmers face, along with the inner strength they must have and how capable women are on the land. The other silo shows the relationship a farmer has with his horse, an animal that past farmers all relied on. The farmer wears the typical style clothing that is worn in the outback.

Kaff-eine is a former lawyer and public servant with an incredible artistic abilty. She transformed her life, becoming a full time artist with a flair for street art, portraiture painting, and film. Her artwork contains symbolism and passes a message to her audience about social and political issues.

Painted silos can be found throughout Victoria, in many other parts of Australia, and also in other parts of the world. The paintings reflect the nature around the landscape and the occupants of the land from the past, present, and future. I see the lifelike murals as a way to reflect on our heritage and to enjoy the artistic ability of our talented artists.