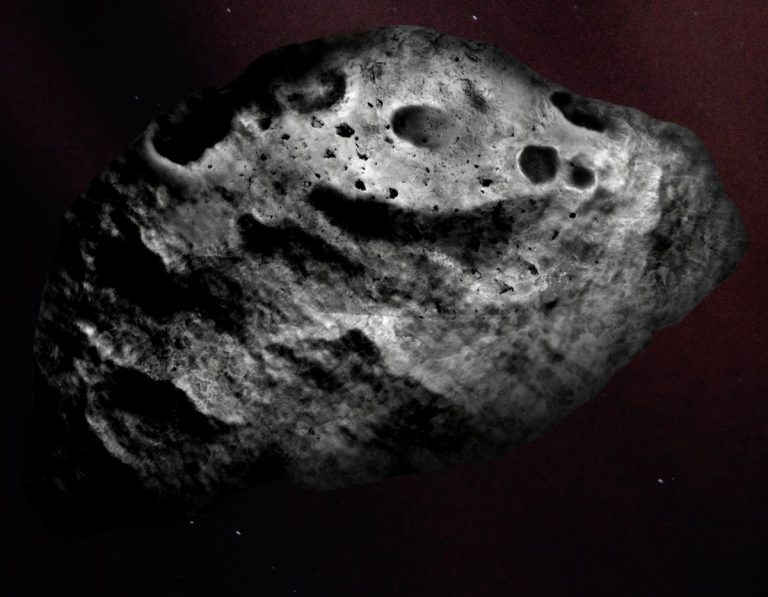 An enormous comet — approximately 80 miles across, more than twice the width of Rhode Island — is heading our way at 22,000 miles per hour from the edge of the solar system. Fortunately, it will never get closer than 1 billion miles from the Sun, which is slightly farther from Earth than Saturn; that will be in 2031.

Comets, among the oldest objects in the solar system, are icy bodies that were unceremoniously tossed out of the solar system in a gravitational pinball game among the massive outer planets, said David Jewitt. The UCLA professor of planetary science and astronomy co-authored a new study of the comet in the Astrophysical Journal Letters. The evicted comets took up residence in the Oort cloud, a vast reservoir of far-flung comets encircling the solar system out to many billions of miles into deep space, he said.

A typical comet’s spectacular multimillion-mile-long tail, which makes it look like a skyrocket, belies the fact that the source at the heart of the fireworks is a solid nucleus of ice mixed with dust — essentially a dirty snowball. This huge one, called Comet C/2014 UN271 and discovered by astronomers Pedro Bernardinelli and Gary Bernstein, could be as large as 85 miles across. Jewitt said:

“This comet is literally the tip of the iceberg for many thousands of comets that are too faint to see in the more distant parts of the solar system. We’ve always suspected this comet had to be big because it is so bright at such a large distance. Now we confirm it is.”

The comet has the largest nucleus ever seen by astronomers

Jewitt and his colleagues determined the size of its nucleus using NASA’s Hubble Space Telescope. Its nucleus is about 50 times larger than those of most known comets. Its mass is estimated to be 500 trillion tons, a hundred thousand times greater than the mass of a typical comet found much closer to the Sun. Lead author Man-To Hui, who earned his doctorate from UCLA in 2019 and is now with the Macau University of Science and Technology in Taipa, Macau, said:

“This is an amazing object, given how active it is when it’s still so far from the sun. We guessed the comet might be pretty big, but we needed the best data to confirm this.”

So the researchers used Hubble to take five photos of the object on Jan. 8, 2022, and incorporated radio observations of the object into their analysis. The object is now less than 2 billion miles from the Sun and in a few million years will loop back to its nesting ground in the Oort cloud, Jewitt said. Comet C/2014 UN271 was first serendipitously observed in 2010, when it was 3 billion miles from the Sun. Since then, it has been intensively studied by ground and space-based telescopes.

The challenge in measuring this object was how to determine the solid nucleus from the huge dusty coma — the cloud of dust and gas — enveloping it. The object is currently too far away for its nucleus to be visually resolved by Hubble. Instead, the Hubble data show a bright spike of light at the nucleus’ location. Hui and his colleagues next made a computer model of the surrounding coma and adjusted it to fit the Hubble images. Then, they subtracted the glow of the coma, leaving behind the nucleus.

Hui and his team compared the brightness of the nucleus to earlier radio observations from the Atacama Large Millimeter/Submillimeter Array, or ALMA, in Chile. The new Hubble measurements are close to the earlier size estimates from ALMA, but convincingly suggest a darker nucleus surface than previously thought. Jewitt said:

The object has been falling toward the sun for well over 1 million years. The Oort cloud is thought to be the nesting ground for trillions of comets. Jewitt thinks the Oort cloud extends from a few hundred times the distance between the sun and the Earth to at least a quarter of the way out to the distance of the nearest stars to our sun, in the Alpha Centauri system.

The Oort cloud’s comets were tossed out of the solar system billions of years ago by the gravitation of the massive outer planets, according to Jewitt. The far-flung objects travel back toward the Sun and planets only if their orbits are disturbed by the gravitational tug of a passing star, the professor said.

First hypothesized in 1950 by Dutch astronomer Jan Oort, the Oort cloud still remains a theory because the comets that make it up are too faint and distant to be directly observed. This means the solar system’s largest structure is all but invisible, Jewitt said.

Provided by University of California, Los Angeles [Note: Materials may be edited for content and length.]