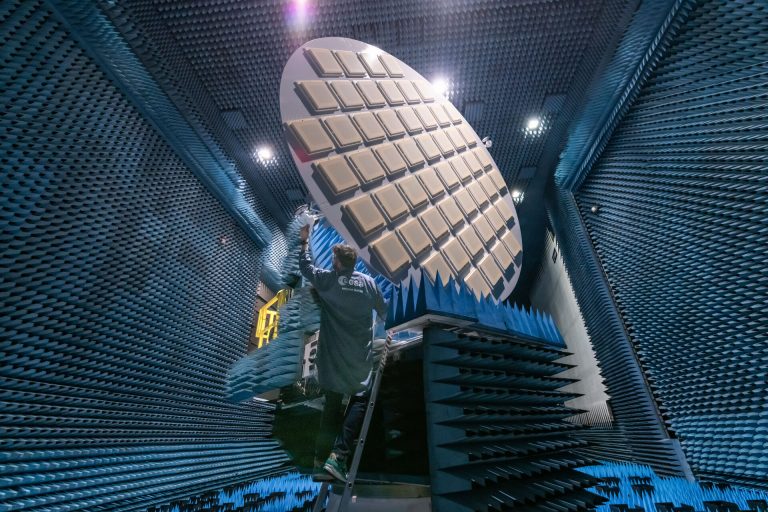 Due to be launched next year, Biomass will deploy a massive 12-m diameter reflector to harness P-band radar signals in order to perform a five-year census of all Earth's trees. (Image: via ESA-SJM Photography)

The largest antenna ever tested in ESA’s Hertz radio frequency test chamber is this 5-m diameter transponder antenna. It will operate down on the ground to help calibrate the Biomass mission, which will chart all the forests on Earth. ESA antenna engineer Luis Rolo, who is overseeing the test campaign, explained:

“This is a particularly challenging test campaign both in terms of the size of the antenna and the very low P-band frequency that Biomass will be using, which allows it to pierce through forest canopies to acquire individual trees. Usually, when we test a large satellite here, its antenna is significantly smaller, typically between 0.5 and 2 metres across. But this entire structure is a radiating antenna in its own right, its sides coming near to the chamber walls.

“What this means is that the testing process highlights some aspects of the chamber we’ve never seen before, even after many years of testing. But we’ve come up with a measurement method involving multiple acquisitions from different spots within the chamber, combined carefully to subtract such environmental effects, yielding very accurate results.”

Part of ESA’s technical heart in the Netherlands, the metal-walled ‘”Hybrid European Radio Frequency and Antenna Test Zone” chamber, is shut off from all external influences. Its internal walls are studded with radio-absorbing “anechoic” foam pyramids to allow radio-frequency testing without any distorting reflections. It will test the Biomass mission antenna, the largest antenna ever tested in the facility. Its name starts with “Hybrid” because the chamber can assess radio signals from antennas both in localized “near-field” terms or else on a “far-field” basis, as if the signal has crossed thousands of kilometers of space.

Due to be launched next year, Biomass will deploy a massive 12-m diameter reflector to harness P-band radar signals in order to perform a five-year census of all of Earth’s trees.

Based in Australia, this transponder will be integrated onto a mobile positioning system inside a protective radome, allowing it to track the Biomass satellite moving across the sky. The transponder antenna will reflect radar signals from Biomass back to it, to help confirm the mission is operating optimally. The transponder was developed and built by the Italian company IDS.

Provided by European Space Agency [Note: Materials may be edited for content and length.]