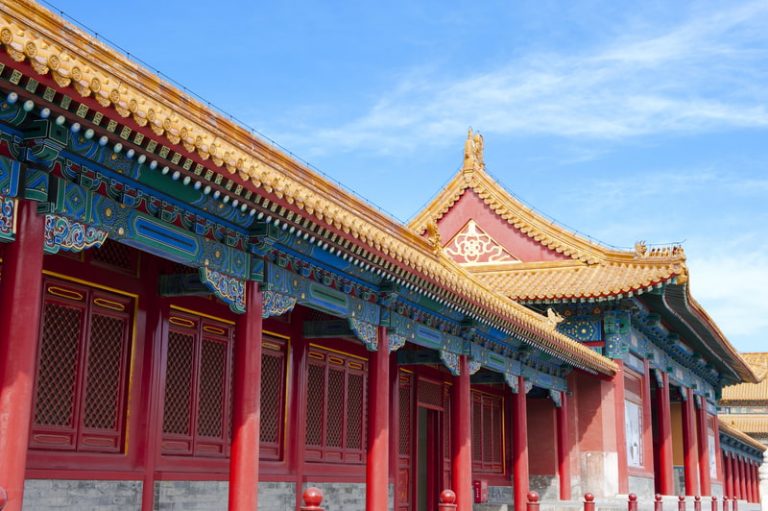 In the Forbidden City lies a giant library with treasures that go beyond the imagination of ordinary people. (Image: Hungchungchih via Dreamstime)

In the Forbidden City lies a giant library with treasures that go beyond the imagination of ordinary people. People come from around the world to discover the rare relics within its fine halls. China’s Palace Museum is a treasure vault containing over a million art masterpieces, including 10,000 world-class wonders.

This painting depicts more than 550 people from all walks of life taking part in everyday activities of the period, and features the capital from the Northern Song period on the 5-meter-long scroll. It is considered to be the most renowned work among all Chinese paintings, and has been called “China’s Mona Lisa.”

It is the oldest preserved calligraphy by a famous person. The content of the piece is Lu’s greeting to a sick friend.

The scroll is 104 cm high and 36 cm wide. The kesi cut silk technique employed is considered to be the most technically demanding and time-consuming. This technique creates an unsurpassed lightness and clarity of pattern. This style is often used to create copies of famous paintings, which requires them to be loaded with artistic and cultural value.

There is a beautiful Langyou red glazed vase with a height of 20.8 cm, a mouth diameter of 6.1 cm, and a base diameter of 9.1 cm. With square eyelets on the foot base, it is a masterpiece created in the Qing government’s kiln by the official Lang Tingi.

He was a master of the craft who succeeded in recovering a lost glazing technique from the Ming Dynasty, refining it to produce an even stronger color and highly glazed surface. It was a very costly process due to the low ratio of perfect pieces in each firing.

Bronze wine cups were largely used between the early Shang Dynasty (600-1046 B.C.) and the Warring States period (475-221 B.C.). The Ya clan used it for ritual purposes. The piece is rare because only a small number of the square-shaped cups have been discovered,

This self-opening lacquer clock tower with immortal figures for birthday blessings was ordered by Qianlong, Emperor during the Qing Dynasty (A.D. 1644-1911). With a height of 185 cm, a width of 102 cm, and a depth of 70 cm, there are seven mechanical systems inside the tower controlling the clock, the time-telling, and the operation of the stage sets.

The Qianlong-style long-last sovereignty wine cup is 12.5 cm tall, 8 cm wide, and has a foot height of 5 cm. According to historic files, Qianlong paid close attention to the creation of the cup by allocating valuable materials like gold, pearls, and precious stones from the royal warehouse, and had it meticulously revised to his total satisfaction.

The cup was used by the Qing emperors each New Year’s Day during the brush-writing ceremony.

This cloud patterned black carved lacquered plate was an art piece made by the great craftsman Zhang Cheng of the Yuan Dynasty (A.D. 1271-1368). Cloud patterns were carved both on the outside and inside of this 19.2 cm diameter wide and 3.3 cm tall plate. The thick and shiny lacquer layer and the smooth and refined craftsmanship make this plate a treasure of very high quality.

It is lavishly decorated with patterns of dragons, clouds, and waves. The piece was originally from the Song Dynasty; however, Qianlong inscribed his poem on the inside bottom, which has made it even more worthy as a collector’s piece.

This Song Dynasty cloisonné container is 13.9 cm tall and 16 cm wide, with a tapered 13.5 cm diameter foot ring and two elephant ivory handles. The enamel inlay patterns of lotus flowers with winding stalks are rich and vibrant, with some of the glazed sections showing glass-like translucency, displaying the unique glamour and elegance of cloisonné ware.