Earliest Record of a Candidate Aurora Found in Chinese Annals 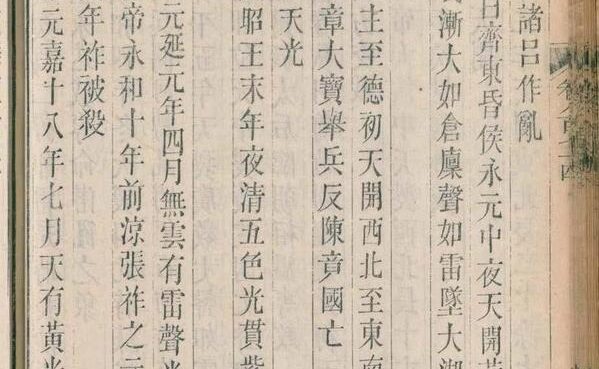 A celestial event mentioned in an ancient Chinese text turns out to be the oldest known reference to a candidate aurora, predating the next oldest one by some three centuries, according to a recent study by Marinus Anthony van der Sluijs, an independent researcher based in Canada, and Hisashi Hayakawa from Nagoya University. This finding was recently published in the journal Advances in Space Research.

The Bamboo Annals, or Zhushu Jinian in Mandarin, chronicle the history of China from the earliest legendary time to the time of their probable composition in the 4th century BCE. Historical events aside, unusual observations in the sky make an occasional appearance in the text. Although this chronicle has been known to scholars for a long time, a fresh look at such old texts sometimes yields surprising new insights. In this case, the authors examined the mention of a “five-colored light” seen in the northern part of the sky on a night toward the end of the reign of King Zhao of the Zhou Dynasty.

Earliest record of an aurora

While the exact year is uncertain, they used up-to-date reconstructions of Chinese chronology to settle on 977 and 957 BCE as the two most likely years, depending on how Zhao’s reign is dated. They found the record of the “five-colored light” to be consistent with a large geomagnetic storm. When the mid-latitude aurora is sufficiently bright, it can present a spectacle of multiple colors. The researchers cite several examples of this from historical records much closer to our time. The Earth’s north magnetic pole is known to have been inclined to the Eurasian side in the mid-10th century BCE, about 15° closer to central China than at present. Therefore, the auroral oval could have been visible to observers in central China at times of significant magnetic disturbance. The study estimates that the equatorward boundary of the auroral oval would have been located at a magnetic latitude of 40° or less on the occasion.

This would be the earliest datable record of an aurora known from anywhere in the world. The finding comes barely two years after that of the previous holder of this distinction — several records of candidate aurorae inscribed on cuneiform tablets by Assyrian astronomers in the period 679-655 BCE. Some scientists have also associated Ezekiel’s vision, which is now dated to 594 or 593 BCE, with auroral visibility in the Middle East, but a caveat must be noted for its reliability. Otherwise, another datable record of an early candidate aurora has been found for 567 BCE in the astronomical diary of Babylonian King Nebuchadnezzar II.

Why did it take so long for scientists to recognize the aurora in the five-colored light of this chronicle entry? One reason is that the Bamboo Annals had a chequered history. The original manuscript was lost, rediscovered in the 3rd century CE, and lost again during the Song Dynasty. In the 16th century, a variant text was printed in which the object in the sky was not a five-colored light, but a comet. Now the new study shows that this cannot have been the original reading.

It is interesting in itself that popular descriptions of the northern lights can be pushed this far back in time. Such historical information is valuable for other reasons as well, however. It helps scientists to model long-term patterns in space weather variability and solar activity on timescales from decades to millennia. Understanding these fluctuations can, in turn, help societies prepare for future solar eruptions of great magnitude and the disruption of technological infrastructure that they may cause. This record is now the only known historical reference to a space weather event before the Homeric Grand (Solar) Minimum (810 – 740 BCE), which should preferably be called the Neo-Assyrian Grand Minimum owing to Homer’s controversial historicity and dates.

Provided by Nagoya University [Note: Materials may be edited for content and length.]