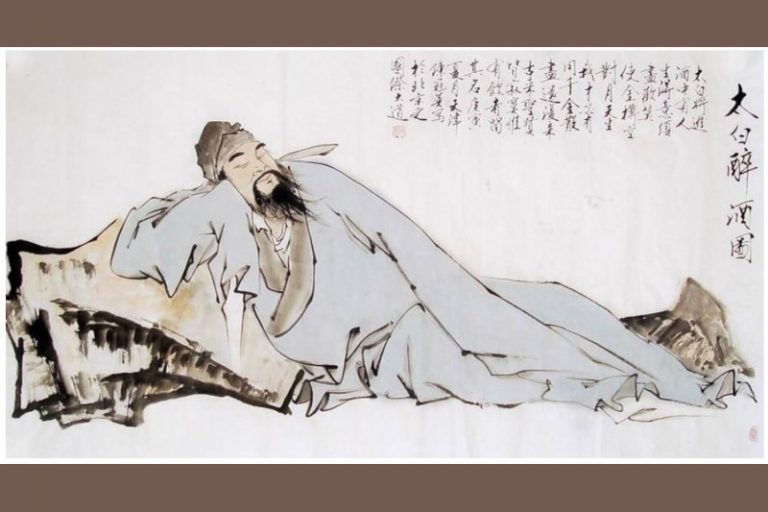 Li Bai, one of the great Tang Dynasty poets, is known for portraying the spectacular scenery of the natural world. (Image: Public Domain via Wikimedia)

Li Bai is one of the great poets that lived during the Tang Dynasty. He was good at portraying the spectacular scenery of the natural world. His poetic style has been described as being magnificent and splendid with an ability to spark one’s imagination in a vigorous and unconstrained way.

Every primary school student is familiar with the following old saying that originated from a story during Li’s youth: “With persistence, an iron rod can be ground down to a needle.”

According to historical records, Li Bai was very playful as a child. His father sent him to school to study so he could grow up as a well-educated good person. Unbeknown to his father, Li Bai found learning the “Classics,” “Histories,” and books of “The Hundred Schools of Thought” to be a hard task. Consequently, he was less interested in studying and was far more intrigued with being a truant.

One day, he skipped school again; he hung around the streets for a while and then walked through the suburbs. The warmth of the sun, cheerful bird calls, and the delightful scene of flowers and grasses swaying in the wind made him exclaim: “On such a fine day as this, how boring would it be to stay inside and study all day!”

While walking, Li Bai unintentionally came to the bank of a small river. He saw a grey-haired older woman squatting near a millstone by the riverside. She was rubbing an iron bar repeatedly. Curiously he went over and asked: “Madam, what are you doing?”

She replied: “I want to grind the iron rod into a sewing needle.”

He asked again: “An embroidery needle for sewing clothes?”

“Sure!” replied the old woman.

“But, it’s such a thick iron bar, how long will it take to grind into a fine embroidery needle?”

She stopped rubbing, raised her head, and kindly spoke to Li Bai: “Child, the iron rod is thick, but it cannot stop me from grinding it every day! As dripping water can penetrate a stone, do you think the iron rod cannot be ground down into a needle?”

“But you are so aged,” retorted Li.

“With more perseverance than others, nothing is impossible,” replied the old woman.

Li Bai was greatly moved by the wisdom of the old lady’s words. Upon reflection, he enlightened and thought: “Certainly, with persistence, no fear of facing difficulties, and striving continuously, everything can be done well. Isn’t it the same with studying?” He turned around and ran straight back to school.

From then on, he studied hard and was never absent again. He diligently read all “The Past Verses,” “Lyrics,” “Odes,” and “Songs” — “The Four Forms of Poetry” and books of “The Hundred Schools of Thought” as soon as he saw them. Consequently, Li Bai became the historically well-acclaimed immortal poet.