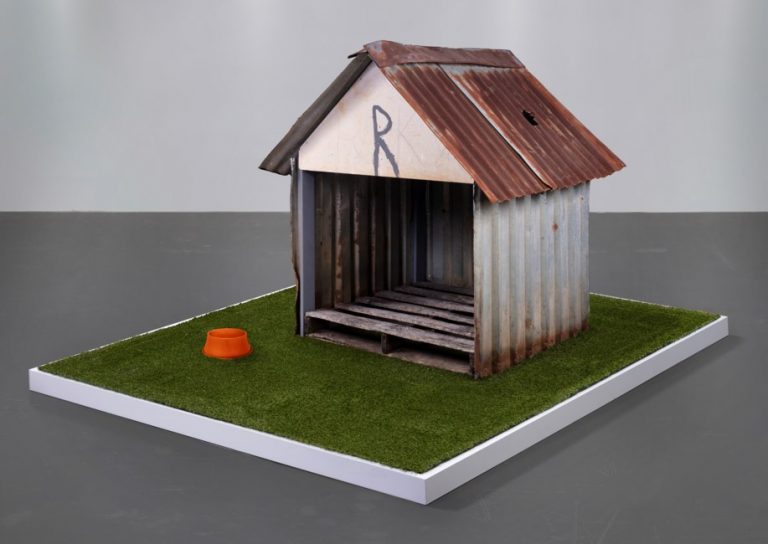 This doghouse, former home of Rocky the German shepherd, sold at Christie's for US$44,100 after being struck by a meteorite. (Image: via Christie's)

Rocky, the German shepherd, was comfortably sleeping inside his doghouse on April 23, 2019, when a fragment from a 59-pound space rock shattered his rusted tin roof. The 10-ounce meteorite just missed Roky, leaving a vast seven-inch hole in its path and ruining the doghouse’s old hardwood floor.

Professional meteorite hunters visited the scene almost immediately, having tracked the fireball to its likely landing place using satellite photographs. Some of these searchers eventually found Roky’s owners, Luis Gamboa and Esmeralda Alvarado, and struck a deal to buy the doghouse and the meteorite.

After the space rock hit a doghouse in rural Costa Rica, people started bidding on it

Fast forward almost two years, and a Christie’s auction has brought in US$65,520 for Roky’s former home and the meteorite that hit it. Both objects were purchased by a London art gallery at the online auction. While $65,520 is a massive sum for a rusted doghouse with a hole in it, James Hyslop, the head of Christie’s travel, science, and natural history department, expected these two items to fetch much more.

“I was personally disappointed,” said Darryl Pitt, a collector who served as a liaison between the meteorite hunters who tracked down the doghouse and Christie’s and put it together with other items for sale. “Someone got an unbelievable deal,” (Atlas Obscura). Pitt believes the low pricing is a reaction to the unrest caused by the coronavirus outbreak and Russia’s now-acknowledged invasion of Ukraine. Despite this, many of the meteorites on display at the same auction sold for far more than their highest estimates.

Other incidents of Earth objects hit by meteorites

Like the 60 or so that were auctioned off alongside the doghouse, meteorites are extremely rare. Most of them burn up in the atmosphere before reaching Earth. Those that do strike our planet tend to land in the seas or in remote locations. Even if all the ones that have ever been discovered were added together, the total mass would still be less than the quantity of gold extracted in a year.

Meteorite-damaged objects are sometimes auctioned off for exorbitant prices, explaining Christie’s prediction that Rocky’s dog house would be worth the median cost of a human home in the United States. An elderly woman’s steel mailbox, which was struck in Georgia in 1984, sold for US$83,000 at auction in 2007.

A 1980 cherry-red Chevy Malibu was possibly the most famous object ever impacted by a meteorite. A magnificent fireball blazed through the sky before slamming into the Chevy on October 9, 1992, as several hundred Peekskill, New York residents gathered in the stands for a high school football game. The car was sold for US$230,000 in 2010 and has since been displayed in museums from Paris to Germany to Japan. Given how rare it is for an object to be hit by a meteorite, Pitt predicts that the doghouse will gain iconic status right along with the mailbox and Chevy.

Furthermore, the Aguas Zarcas meteorite, named after the Costa Rican area where it crashed, isn’t your average rock. A carbonaceous chondrite, or CM2, is what it’s called. CM2s are some of the oldest objects in our solar system, dating back 4.7 billion years, making them older than our whole system.

Why are meteorite-stricken objects so expensive?

According to University of California Los Angeles researcher Alan Rubin, who helped fact-check the auction item’s description, CM2s’ composition is very comparable to the sun’s surface in terms of the elemental abundances. If you took away the sun’s hydrogen and helium, the husk you’d be left with would have the same elemental makeup as the Aguas Zarcas meteorite. Scientists believe the sun and planets formed when objects like the Aguas Zarcas meteorite fused together to form larger celestial bodies.

According to Rubin, this sort of meteorite also contains amino acids. Proteins are made up of amino acids, and proteins are made up of life. The discovery of extraterrestrial amino acids in carbonaceous chondrites raises the likelihood that they were engaged in populating the early Earth with some of the raw components required for life. This CM2 meteorite, along with others like it, could be the reason for life on Earth. The Aguas Zarcas meteorite that hit Rocky’s doghouse is the world’s second-largest CM2.

People have become increasingly interested in meteorites and meteorite collecting in recent decades. This, according to Rubin, could be because rarer and thus more expensive ones have been discovered in recent years, attracting collectors’ attention. They have an unearthly quality to them, literally. They provide a “visceral understanding of our place in the universe,” as Rubin puts it. “Having these breathtakingly beautiful objects that come from outside our own world and our own existence, it really captures people’s imagination,” Hyslop says (Atlas Obscura).