Why the Dragon King Temple Buddha Statue Couldn’t Be Moved 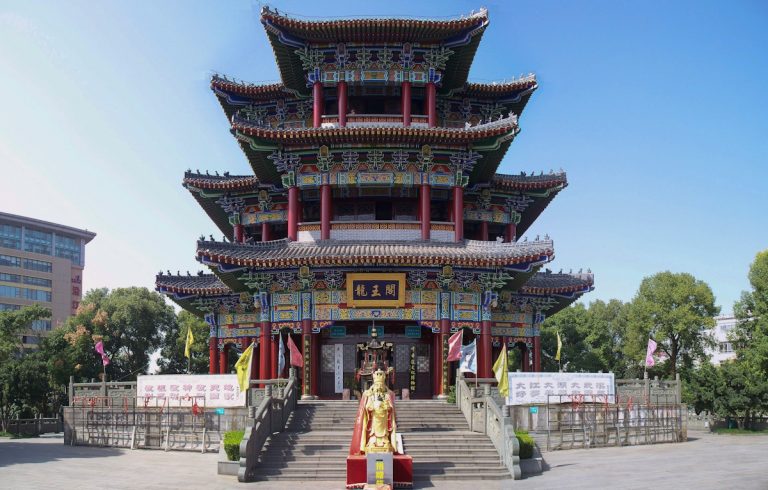 The Dragon King Temple is a prominent Chinese Shenist temple located in Wuhan, Hubei, China. It was built in the early Ming Dynasty and had its heyday during the Qing Dynasty.

Ancient Qing emperors often visited the temple to worship. Thus, it became a royal temple and was adorned magnificently. Vast amounts of gold, jade, and precious materials were placed in the temple. Compared with other temples, it was unchallenged.

In 1929, Chinese Nationalist Party (KMT) troops led by Yue Jijun came to Wuhan to crack down on the Great Sword Society. As they passed by the Dragon King Temple, the battalion commander was fascinated by the exquisite beauty of the Buddha statue that was placed in the Cishan Hall of the temple for worship.

The Dragon King Temple Buddha statue could not be moved

To make the statue his own, Yue Jijun ordered his soldiers to remove the Dragon King Temple Buddha statue from the altar. As they moved the statue outside, they felt it become heavier and heavier. Finally, they were unable to move the statue any further. The soldiers were shocked and reported this to the commander instantly.

The commander did not believe this and ordered more soldiers to assist. Finally, the Buddha statue was hauled away from the temple. As they got closer to the God of Fire Temple, which is not far away from the Dragon King Temple, the statue suddenly became so heavy that no matter how many people there were, they could not lift it anymore.

Some soldiers were frightened, saying that the Buddha statue had mysterious powers. Upon seeing this situation, the commander dared not further move the statue.

The local elders told Yue Jijun that perhaps the Buddha statue did not want to leave that place. However, the commander believed the situation was so magical that he became determined to follow the natural course of Heaven and said:

“Since the Buddha is unwilling to leave here, let’s place it in the God of Fire Temple for people to worship!”

The local people welcomed the commander’s suggestion. Then, to their surprise, when they tried to lift the statue again, it became very light. Finally, the Buddha statue was settled in the God of Fire Temple. This magical event was soon widely spread among the people, and from then on, the God of Fire Temple was bustling with pilgrims.

During the Cultural Revolution, some people were brainwashed by the Chinese Communist Party (CCP) to believe in nothing but the CCP. As a result, the Dragon King Temple was destroyed until nothing was left. The God of Fire Temple also couldn’t escape disaster. The mob pushed the Buddha statue down from the altar.

As it lay on the courtyard’s ground, a young man sat on it, playing a zither and singing. Some people even jumped up and down on it. Finally, this group of people overturned the Buddha statue, throwing it into a pond at the temple.

The local elders sighed and said:

“Do you know why the Buddha’s power showed itself while the KMT tried to move it, but when the CCP humiliated it, its power did not appear? Because the KMT believes in gods, while the CCP does not. What a difference there is between them!”

Many of the participants who destroyed the temples died tragically or ended up suffering in one way or another; many of those rebels received retribution for their deeds.