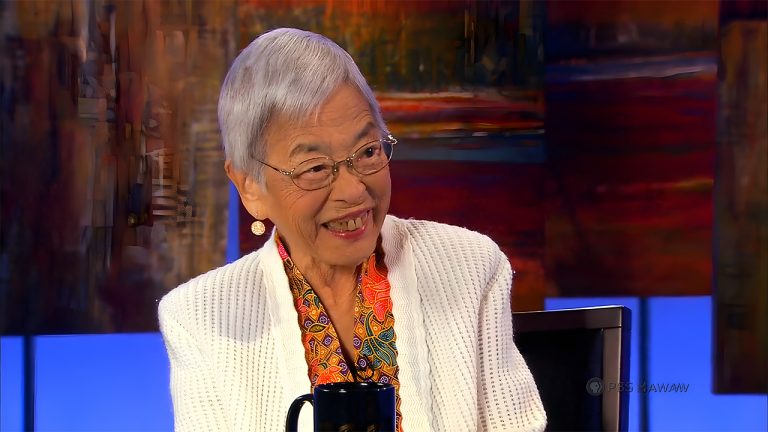 Isabella Abbott was the first Native Hawaiian woman to receive a Ph.D. in science and was recognized as a world expert on Pacific marine algae. (Image: Screenshot via PBS Hawaiʻi Youtube)

Isabella Aiona Abbott (June 20, 1919 – October 28, 2010) was an educator, phycologist, and ethnobotanist from Hawai’i. She was the first Native Hawaiian woman to receive a Ph.D. in science and was recognized as a world expert on Pacific marine algae.

Isabella Abbott, born to a Hawaiian mother and a Chinese father, spent much of her childhood learning about different types of edible seaweed. Her mother had a knack at recognizing and naming practically every one of the five dozen or so varieties of Limu. As a young child, she would frequently accompany her mother to the beach to collect seaweed, which her mother would then use to prepare traditional Hawaiian cuisine.

Isabella Abbott became familiar with different kinds of seaweeds through her childhood, including the fuzzy, coppery limu kohu (Asparagopsis taxiformis), the soft, tangled limu wawae’iole, as well the branchy, centipede-like limu huluhulu waena (Grateloupia filicina). She found joy in exploring the coastlines of Honolulu and Lahaina combing for limu varieties. And what started as a mere pastime, and the adventures she had at the beach, later became her lifelong calling.

Later on, she married naturalist Donald Putnam Abbott (1920-1986), a fellow student at both the University of Hawaii and the University of California, Berkeley. Then, they relocated to Pacific Grove, California, where her husband worked at Stanford University’s Hopkins Marine Station while she studied algae along the coasts of California. Her work later landed her a position as a research associate at Hopkins, where she also taught as a lecturer.

For Isabella, seaweed was more than simply a professional interest. She brought zucchini bread prepared with bull kelp instead of squash to work gatherings every month, and she organized an annual seaweed pickling get-together. Her kelp culinary skill was even featured in Gourmet magazine in 1987.

She was also a prolific researcher. She wrote over 150 journal papers and eight books, including the seminal work on Pacific Coast seaweed, Marine Algae of California, published in 1976. In her work, she depicts a rainbow of limu under the sea. This includes the ethereal giant kelp (Macrocystis pyrifera) with its flowing mermaid locks; the mulberry-hued, coral-shaped grapestone or Turkish washcloth (Mastocarpus papillatus); and the leggy alaria (Alaria fistulosa) with its chartreuse blades that can grow up to 99 feet in length.

Isabella was one of the first scientists to discover how healthy seaweed forests are critical to the health of marine ecosystems. When kelp habitats begin to die out due to rising temperatures, ocean acidification, and other human-caused problems, the entire ecosystem is jeopardized.

Isabella Abbott also laid out a lot of the framework for the second part of the story. While failing kelp forests are a symptom of a broader problem, blooming kelp forests are practical barriers to the same challenges. According to Brian von Herzen, founder and executive director of the Climate Foundation, the undersea plants capture and store carbon and restore natural upwelling and fill the ocean’s nutrient value chain. Rebuilding seaweed habitats can aid in environmental re-balancing.

The Abbotts returned to Hawai’i in their later years, and Isabella joined the faculty at the University of Hawaii-Manoa, where she taught until her death. She received the Gilbert Morgan Smith Medal, the most prestigious prize in marine botany, and was recognized as a Living Treasure of Hawaii when she was there.

The title seemed appropriate for a woman who hung a Hawaiian flag quilt on her dining room wall with pride. Her grandmother produced the artifact courageously after the collapse of the Native Hawaiian government in 1893. That quilt was dear to her heart, and its history tells you a bit about growing up in Hawaii at that time.

According to her, the human relationship with seaweed began “with a housewife in pursuit of a pudding.” She appreciated seaweeds in all of their ancient forms, which had provided generations of sustenance to the island and its people. Truly, the First Lady of Limu was more than a marine botanist. Isabella Abbott was a trailblazer in science — a beacon of light to all women in the world to pursue their scientific aspirations.