Beauty in Imperfection: The Mysterious Origin of the Venus de Milo 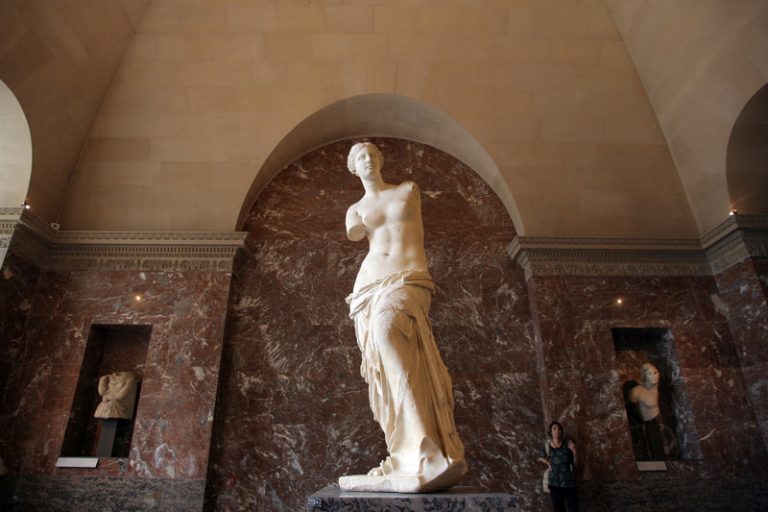 The Venus de Milo, one of art history's most important sculptures, continues to fascinate audiences today. (Image: Bizoon via Dreamstime)

The Venus de Milo, one of art history’s most important sculptures, continues to fascinate audiences today. The marble masterwork, housed in the Louvre in Paris, is praised for its Hellenistic artistry, recognized for its beauty and controversial design.

The story of the statue, like many other prized antiquities, remains a mystery from the time it was discovered in the 19th century. Archaeologists and art historians have pieced together a story exploring and explaining its possible origin today.

What is the Venus de Milo?

The Venus de Milo, also known as the Aphrodite of Milos, is a marble sculpture that was most likely created by Alexandros of Antioch, a Hellenistic Greek sculptor, in the late 2nd century B.C. It displays a nearly naked, larger-than-life female figure (6 feet, 8 inches tall) posing in a classic S-curve.

According to the Louvre, her body is made up of two blocks of Parian marble, and “many pieces were sculpted independently (bust, legs, left arm, and foot).” Furthermore, though no pigment or metal remains on the marble now, the sculpture was most likely colorfully painted and embellished with jewelry.

Who is Venus de Milo?

Since the statue was discovered without its arms, it is practically impossible to know who Venus de Milo represents with absolute certainty as the sculptures of most gods and goddesses from this period carried symbolism of who they were in what they held in their hands. Despite this, art historians have two strong interpretations: the strongest and most popular of which is that she is Venus, the goddess of love (the Roman counterpart to Aphrodite).

She could also perhaps represent Amphitrite, the sea goddess, who was revered on the Greek island of Melos, where the work of art was discovered. The statue was discovered near a Parian marble apple, which is one of Amphitrite’s symbols and is made of the same material as the sculpture.

A peasant unearthed the statue in an antique niche on the Aegean island of Melos in around 1820. It might be reconstructed even though it was discovered in fragments. However, the figure’s broken arms—one grasping an apple, the other brushing against the figure’s waist — were considered unoriginal and were not reattached.

The figure was also discovered on an inscribed base, which proved to be a later addition and was so removed, as shown in this illustration by Jean-Baptiste-Joseph Debay.

Even though the Venus de Milo was an unfinished sculpture, it was immediately regarded as a masterpiece. It was presented to Louis XVIII, who in 1821 bequeathed it to the Louvre. While the museum wanted to restore the statue, no one could decide where the statue’s arms should be placed. “Leaning against a pillar, resting her elbow on Ares’ shoulder, or holding a variety of qualities” are only a few options for the statue’s original form.

Because the Louvre couldn’t agree on the sculpture’s intended style, it was displayed without its arms — a choice that hasn’t changed.

A timeless beauty that continues to inspire

The sculpture has been a critical component of the Louvre’s permanent collection for nearly 200 years. It is recognized as one of the museum’s most valuable — and popular — items of art, among works such as Leonardo da Vinci’s Mona Lisa and Michelangelo’s Dying Slave.

The enchanting work of art has been described as “an icon of silent feminine beauty” and “the ultimate symbol of charm”. It continues to be envisaged as beautiful and complete, despite her fragmentary status at the time of her discovery.