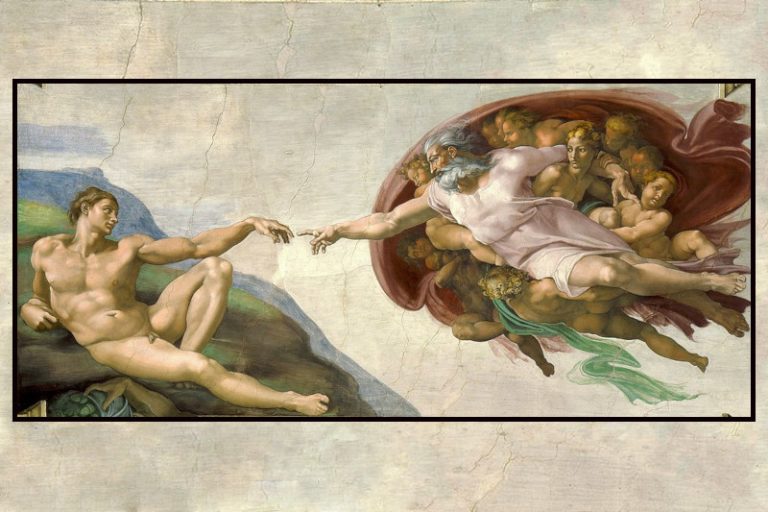 One of Michelangelo's greatest works illustrates the Biblical story of creation from the Book of Genesis where God breathes life into the first man, Adam. (Image: Public Domain via Wikimedia)

One of Michelangelo’s greatest works, The Creation of Adam, is a fresco that forms a part of the Sistine Chapel’s ceiling illustrating the Biblical story of creation from the Book of Genesis where God breathes life into the first man, Adam. While it might only be a small part of the Sistine Chapel ceiling, something about this painting makes it stand out. It can be considered one of the most iconic images in European art history and it is a treasure that has continued to inspire artists and scientists for centuries.

Michelangelo, a polymath genius, is considered one of the greatest artists of all time. A sculptor, painter, architect, and poet with an artistic versatility of such a high order that he is often considered a contender for the title of the conventional Renaissance man along with his rival and fellow Florentine, Leonardo da Vinci. Michelangelo’s artistic marvels include many sculptures such as David, Pieta, and Bacchus, along with frescoes such as The Last Judgment on the altar wall of the Sistine Chapel.

The composition of ‘The Creation of Adam’

In 1508, Pope Julius II commissioned Michelangelo to paint the Sistine Chapel, and it took him four years to complete these amazing works of art, each of which contained an enigmatic significance.

One such illustration is The Creation of Adam. This composition is the fourth in a series of detailed panels illustrating the episodes found in Genesis. God is depicted as an ancient white-bearded man wrapped in a white cloak, whereas Adam is depicted completely naked in the lower left corner. Angels without wings are depicted as supporting God, who is depicted inside a floating nebula. The right arm of God reaches out to touch the left arm of Adam, which is extended in a position that mirrors God’s, serving as a reminder that man was formed in the image and likeness of the Creator.

Many different theories have been offered by art historians on the identities of the 12 individuals surrounding God. The most frequently recognized interpretation is that of English art critic Walter Pater, who claims that the person shielded by God’s left arm is none other than the first woman, Eve. The presence of a feminine aura, as well as the stare directed at Adam, justifies the claim. Additionally, the remaining eleven figures represent the complete human race. This idea was contested by the Catholic Church, which asserted that the pre-existence of souls is considered blasphemous in the Christian religion.

The fresco painting is symbolic in nature

Michelangelo began dissecting bodies from the Church cemetery when he was 17 years old. In light of Michelangelo’s knowledge of human anatomy, numerous interpretations were developed as a result of his work.

It is said that the painting is a representation of the human brain. The figure of God juxtaposed with the human brain is the most frequently seen interpretation of the painting. In 1990, a physician in Anderson, Indiana, named Frank Meshberger found out that the shape depicted beneath the figure of God physiologically corresponds to the anatomy of the human brain. The borders of the artwork correspond to the frontal lobe, optic chiasm, brainstem, pituitary gland, and the major sulci of the cerebrum, among other structures.

Another interpretation is that it symbolizes the birth of humans. Another piece of research that was published was by a group of Italian researchers who understood God as being located in a postpartum uterus and Adam as being lying on a woman’s torso, according to their findings.

An interesting analysis from the Clinical Anatomy Journal states that the painting of Adam contains an extra rib, representative of the rib that was removed from Man in order to create Woman. Since Michelangelo is known to have intricate anatomical knowledge, the author of the analysis concluded that this was the artist’s way of conveying the idea that Adam and Eve had been created at the same time, an interpretation that was in opposition to Christian theology that holds that Eve was created after Adam.

Even if it is difficult to analyze historical works from the present perspective, Michelangelo’s understanding of human anatomy persuaded art historians that everything in this painting has an explanation. This work of art is a great example of how Michelangelo depicted the origins of the human race in a single picture, a feat that few artists could have accomplished.