Enigmatic Rocks on Mars Show Evidence of a Violent Origin 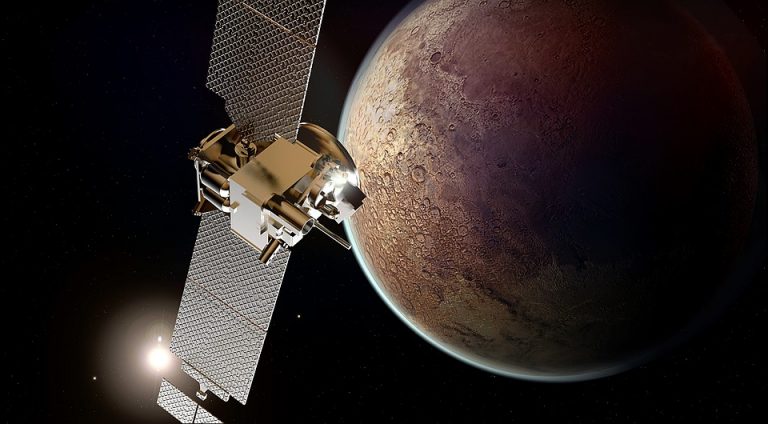 Determining the history of Mars, how it formed and evolved over time, has been a goal of both orbiter and rover missions to the Red Planet for decades. (Image: via Pixabay)

Determining the history of Mars, and how it formed and evolved over time, has been a goal of both orbiter and rover missions to the Red Planet for decades. Analyzing data from several of these Mars missions, a team of researchers led by Steve Ruff of Arizona State University’s School of Earth and Space Exploration has determined that enigmatic olivine-rich bedrock in Gusev Crater and in and around Jezero Crater may be a type of rock called “ignimbrite,” which is both igneous and sedimentary and forms as the result of cataclysmic explosive eruptions from immense volcanic calderas.

If the team is correct, this may lead to a better understanding of olivine-rich bedrock in other places on Mars and may also indicate a style of volcanism more common in Mars’ early history. The results of their study have been recently published in Icarus. Ruff said:

“There are lots of ideas for the origin of olivine-rich bedrock that covers large portions of a region called Nili Fossae, which includes Jezero Crater. It’s a debate that’s been going on for nearly 20 years.”

Exposures of bedrock rich in olivine and also carbonate link Gusev Crater, explored 16 years ago by NASA’s Spirit rover, and the Nili Fossae region where the Mars 2020 Perseverance rover is currently exploring in Jezero Crater. Both locations have the highest abundance of olivine yet identified on Mars. The similarities in composition and morphology of the widely separated olivine-rich rocks had not been investigated previously. Now it appears that they formed in a similar way.

Olivine is a common silicate mineral that comes from magma generated in the mantle of Mars (this same process occurs on Earth as well). So some kind of volcanic process is a reasonable explanation for the origin of the olivine-rich rocks on Mars. But scenarios ranging from lava flows to a giant impact dredging up olivine from the mantle had been proposed previously. Ruff and the team aimed to test a leading hypothesis involving ash gently deposited from volcanic plumes. But their observations revealed a much more violent history.

Same types of rocks are found on Mars and Earth

In particular, Ruff examined mosaics of images from the Mars rover Spirit’s Microscopic Imager (which is like a geologist’s hand lens) and noticed rocks with an unusual texture. Ruff consulted an online library with images of rocks on Earth and came across some volcanic rocks with textures that looked remarkably similar to those in the mosaics from Mars. Ruff said:

“That was a eureka moment. I was seeing the same kind of textures in the rocks of Gusev Crater as those in a very specific kind of volcanic rock found here on Earth.”

The images were from a type of rock called “ignimbrite,” which essentially is both igneous and sedimentary at once. Ignimbrites form as the result of flows of pyroclastic ash, pumice, and blocks from the largest volcanic explosions known on Earth. Ruff said:

“Imagine a ground-hugging cloud of hot gases and nearly molten ash and pumice flowing through the landscape for dozens of miles and piling up in layers up to hundreds of feet thick in just a few days.”

Following their emplacement, ignimbrite deposits slowly cool over months or years. This leads to intricate networks of fractures known as cooling joints that form as the thick piles of ash and pumice contract. Ruff recognized notably similar fracture patterns in the olivine-rich bedrock deposits on Mars, adding to the evidence for an ignimbrite origin. On Earth, ignimbrites are found in places like Yellowstone National Park in the Western U.S. The yellow-hued rocks are ignimbrites from a huge volcanic caldera that formed during a period beginning about 2.1 million years ago and is now filled in, Ruff said:

“No one had previously suggested ignimbrites as an explanation for olivine-rich bedrock on Mars. And it’s possible that this is the kind of rock that the Perseverance rover has been driving around on and sampling for the past year.”

Mars has the biggest volcano in the solar system and lava flows that cover huge swaths of the planet, so volcanic rocks are a given. But only a few places had been suggested to contain ignimbrites, and until now only tentatively. With this team’s new findings, it is possible that ignimbrites occur in both Jezero and Gusev craters. Other locations with olivine-rich bedrock also are candidate ignimbrite deposits, and all of them appear to have formed early in Mars history, during the first billion years or so, Ruff said:

“The olivine-rich composition is unusual for most ignimbrites on Earth, but there is evidence for this composition in the oldest ones. Now with the strong evidence for ancient olivine-rich ignimbrites on Mars, maybe this points to a style of volcanism, cataclysmic explosive eruptions of olivine-rich magma, that happens in the early geologic evolution of a planet. The answer in the case of Mars may come from rock samples collected by Perseverance and returned to Earth by future missions.”

Provided by Arizona State University [Note: Materials may be edited for content and length.]