Could Meteorites Have Generated the Blueprint for Life? 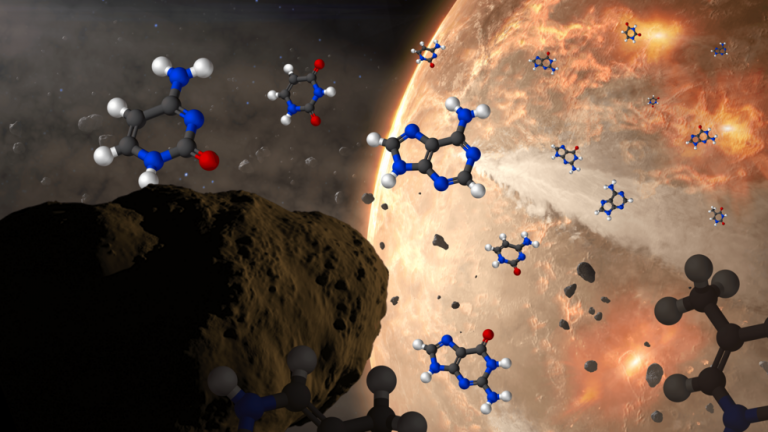 Conceptual image of meteoroids delivering nucleobases to ancient Earth. The nucleobases are represented by structural diagrams with hydrogen atoms as white spheres, carbon as black, nitrogen as blue and oxygen as red. (Image: Dan Gallagher via NASA Goddard / CI Lab/)

Using new analyses, scientists have just found the last two of the five informational units of DNA and RNA that had yet to be discovered in samples from meteorites. While it is unlikely that DNA could be formed in a meteorite, this discovery demonstrates that these genetic parts are available for delivery and could have contributed to the development of the instructional molecules on early Earth. The discovery, by an international team along with NASA researchers, gives more evidence that chemical reactions in asteroids can make some of life’s ingredients, which could have been delivered to ancient Earth by meteorite impacts or perhaps the infall of dust.

All DNA and RNA, which contains the instructions to build and operate every living being on Earth, contain five informational components, called nucleobases. Until now, scientists scouring extraterrestrial samples had only found three of the five. However, a recent analysis by a team of scientists led by Associate Professor Yasuhiro Oba of Hokkaido University, Hokkaido, Japan, identified the final two nucleobases that have eluded scientists.

Nucleobases belong to classes of organic molecules called purines and pyrimidines, which have a wide variety. However, it remains a mystery why more types haven’t been discovered in meteorites so far. Oba, lead author of a paper about the research published in Nature Communications, said:

“I wonder why purines and pyrimidines are exceptional in that they do not show structural diversity in carbonaceous meteorites unlike other classes of organic compounds such as amino acids and hydrocarbons. Since purines and pyrimidines can be synthesized in extraterrestrial environments, as has been demonstrated by our own study, one would expect to find a wide diversity of these organic molecules in meteorites.”

“We now have evidence that the complete set of nucleobases used in life today could have been available on Earth when life emerged.”

This newly discovered pair of nucleobases, cytosine and thymine, have been elusive in previous analyses likely because of their more delicate structure, which may have degraded when scientists previously extracted samples. In the earlier experiments, scientists created something of a “meteorite tea,” placing grains of a meteorite in a hot bath to let the molecules on the sample extract into the solution and then analyzing the molecular makeup of the extraterrestrial broth. Glavin said:

“We study these water extracts since they contain the good stuff, ancient organic molecules that could have been key building blocks for the origin of life on Earth.”

Because of how delicate these two nucleobases are, the team was initially skeptical to see them in the samples. But two factors may have contributed to the new discovery: first, the team used cool water to extract the compounds instead of hot formic acid — which is very reactive and could have destroyed these fragile molecules in previous samples. Second, more sensitive analytics were employed that could pick up on smaller amounts of these molecules. Jason Dworkin, a co-author of the paper at NASA Goddard said:

“This group has managed a technique that is more like cold brew than hot tea and is able to pull out more delicate compounds. I was amazed that they had seen cytosine, which is very fragile.”

The finding doesn’t provide a smoking gun as to whether life on Earth got an assist from space or came about exclusively in the prebiotic soup in the planet’s infancy. But completing the set of nucleobases that make up life today, in addition to other molecules found in the sample, gives scientists who are trying to understand the beginnings of life more compounds to experiment with in the lab. Dworkin said:

“This is adding more and more pieces; meteorites have been found to have sugars and bases now. It’s exciting to see progress in the making of the fundamental molecules of biology from space.”

Not only did this analysis add to the kit for those modeling the inception of life on Earth, it also provides a proof of concept for a more effective technique to extract information from meteorites and asteroids in the future, especially from the samples of Bennu making their way to Earth in the next year via NASA’s OSIRIS-REx mission.