Earth’s Atmosphere May Be the Source of Some Lunar Water 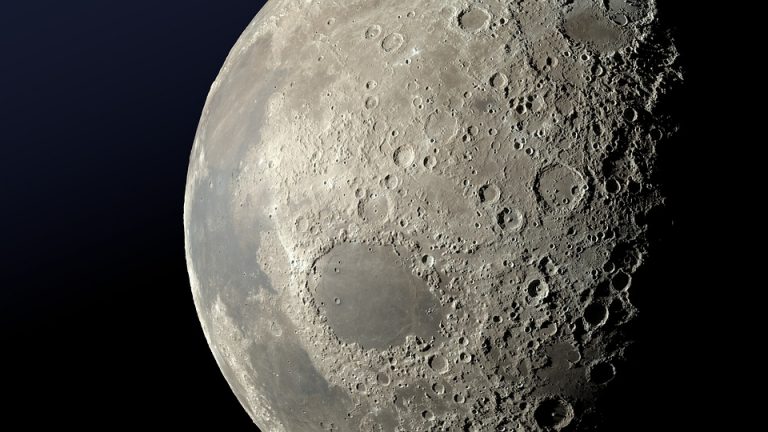 Hydrogen and oxygen ions escaping from Earth’s upper atmosphere and combining on the Moon could be one of the sources of the known lunar water and ice, according to new research by University of Alaska Fairbanks Geophysical Institute scientists. (Image: via Pixabay)

Hydrogen and oxygen ions escaping from Earth’s upper atmosphere and combining on the Moon could be one of the sources of the known lunar water and ice, according to new research by University of Alaska Fairbanks Geophysical Institute scientists.

The work led by UAF Geophysical Institute associate research professor Gunther Kletetschka adds to a growing body of research about water at the Moon’s north and south poles. Finding water is key to NASA’s Artemis project, the planned long-term human presence on the Moon. NASA plans to send humans back to the Moon this decade. Kletetschka said:

“As NASA’s Artemis team plans to build a base camp on the Moon’s south pole, the water ions that originated many eons ago on Earth can be used in the astronauts’ life support system.”

The new research estimates the Moon’s polar regions could hold up to 3,500 cubic kilometers — 840 cubic miles — or more of surface permafrost or subsurface liquid lunar water created from ions that escaped Earth’s atmosphere. That’s a volume comparable to North America’s Lake Huron, the world’s eighth-largest lake. Researchers based that total on the lowest volume model calculation — 1 percent of Earth’s atmospheric escape reaching the Moon. A majority of the lunar water is generally believed to have been deposited by asteroids and comets that collided with the Moon. Most were during a period known as the Late Heavy Bombardment.

Now there are three hypotheses about how lunar water came about

In that period, about 3.5 billion years ago when the solar system was about 1 billion years old, it is argued that the early inner planets and Earth’s Moon sustained unusually heavy impacts from asteroids. Scientists hypothesize that solar winds are also a possible source. The solar wind carries oxygen and hydrogen ions, which may have combined and been deposited on the Moon as water molecules. Now there’s an additional way to explain how lunar water accumulates on the Moon.

The research was published on March 16 in the journal Scientific Reports in a paper authored by Kletetschka and co-authored by Ph.D. student Nicholas Hasson of the Geophysical Institute and UAF Water and Environmental Research Center at the Institute for Northern Engineering. Several colleagues from the Czech Republic are also among the co-authors. Kletetschka and his colleagues suggest hydrogen and oxygen ions are driven into the Moon when it passes through the tail of the Earth’s magnetosphere, which it does on five days of the Moon’s monthly trip around the planet. The magnetosphere is the teardrop-shaped bubble created by Earth’s magnetic field that shields the planet from much of the continual stream of charged solar particles.

Recent measurements from multiple space agencies — NASA, European Space Agency, Japan Aerospace Exploration Agency, and Indian Space Research Organization — revealed significant numbers of water-forming ions present during the Moon’s transit through this part of the magnetosphere. These ions have slowly accumulated since the Late Heavy Bombardment. The presence of the Moon in the magnetosphere’s tail, called the magnetotail, temporarily affects some of Earth’s magnetic field lines — those that are broken and which simply trail off into space for many thousands of miles.

Not all of Earth’s field lines are attached to the planet at both ends; some have only one attachment point. Think of each of these as a thread tethered to a pole on a windy day. The Moon’s presence in the magnetotail causes some of these broken field lines to reconnect with their opposing broken counterpart. When that happens, hydrogen and oxygen ions that had escaped Earth rush to those reconnected field lines and are accelerated back toward Earth. The paper’s authors suggest many of those returning ions hit the passing Moon, which has no magnetosphere of its own to repel them, Kletetschka said:

“It is like the Moon is in the shower — a shower of water ions coming back to Earth, falling on the Moon’s surface.”

The ions then combine to form the lunar permafrost. Some of that, through geologic and other processes such as asteroid impacts, is driven below the surface, where it can become liquid lunar water. The research team used gravitational data from NASA’s Lunar Reconnaissance Orbiter to study polar regions along with several major lunar craters. Anomalies in underground measurements at impact craters indicate locations of fractured rock conducive to containing liquid lunar water or ice. Gravity measurements at those subsurface locations suggest the presence of ice or liquid lunar water, the research paper reads.

The latest research builds on work published in December 2020 by four of the new paper’s authors, including Kletetschka.

Provided by Rod Boyce, University of Alaska Fairbanks [Note: Materials may be edited for content and length.]