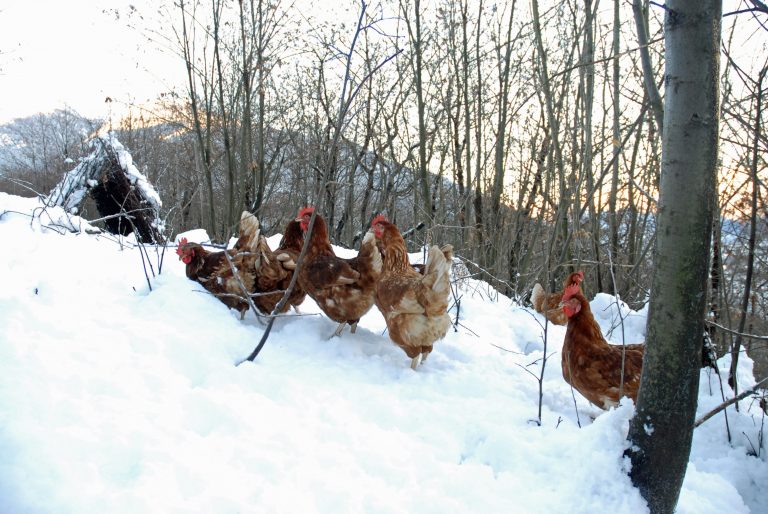 Why are Alpine eggs any different from other eggs? You usually would not call chickens wild birds unless you come across certain species of wildfowl. Still, the ancestors of present-day chickens roamed the tropical forests of Asia. Then, 10,000 years ago, humans started domesticating chickens for eggs and meat. Today, chicken meat is the most consumed animal protein by humans.

While most people and corporations such as Perdue Farms that are engaged in poultry farming never would consider allowing their birds to return to the wild, that is exactly what an Italian farmer did, and the results are pretty impressive.

A 48-year-old Italian chicken farmer named Massimo Rapella is helping fowls explore their wild side. He, along with his spouse Elisabetta, has been keeping approx. 2,100 hens in a pristine chestnut forest in Valtellina, Italy, just north of Milan.

Rapella had no experience in animal husbandry; he says it was purely by chance that he became a chicken farmer. Before raising chickens, he and his wife ran an educational NGO. Then the 2008 financial crisis took place, and the Italian government cut financial aid to social enterprises such as theirs. Consequently, they relocated to the mountains and back to the land.

They started by keeping a handful of chickens for eggs. Rapella soon found out that the chickens liked to roam around in the forest. So he decided to let the birds spend more time in the wilderness. After a few months, he found out that the birds looked healthier, and their eggs tasted better. So he said: “I started wondering if I could take on more chickens and create ‘Alpine eggs’ to sell in local markets.” The idea clicked, and now he supplies Alpine eggs to 40 area restaurants.

The initiative is unique but not unnatural for the chickens. Penn State University’s animal science professor Phillip J. Clauer says the red junglefowl is the ancestor of the domesticated chicken. However, several generations of human domestication have suppressed the core survival skills of today’s chickens.

Rapella says: “The first large batch of chickens I took in looked lost. They had never seen a tree or a bug, and they were scared of snow. However, their adaptation skills improved with time, and the birds started venturing into the woods. They then stayed in the nearby chestnut forest most of the time.”

After becoming accustomed to the wilderness, the chickens began showing traits of their ancestors. Rapella says his chickens, like today’s red junglefowl, have become omnivorous foragers. They eat ants, chestnuts, leaves, and worms.

However, it is hard to discard some domestication traits. The red junglefowl can fly for a small distance; however, the chickens bred by humans are heavier, and they stick to running on the forest floor.

Rapella keeps two species of chickens — White Leghorns and Hy-Line Brown hens. In addition, he owns two trained Maremma sheepdogs to safeguard the birds from predators, such as foxes and badgers.

Rapella’s chickens lay their Alpine eggs nearly daily and prefer the natural nests formed by branches. Once a hen zeroes in on a favorite nesting spot, it becomes a permanent location for egg-laying. This trait makes egg hunting easy for Rapella as he collects almost 1,000 Alpine eggs a day.

The wild Alpine eggs resemble regular eggs, but they have more flavor and protein content. Based on the diet of the chicken, the color of the egg yolk varies from one season to another. Rapella believes that since his chickens have space to roam, they are less stressed and yield better eggs than their confined counterparts. His birds are also more sociable than their farm-raised cousins and stay in groups of 15 to 20 hens.

Rapella’s approach is also good for the environment. He says he never needs to purchase commercial feed and the chicken’s excrement serves as nutrients for the chestnut trees.