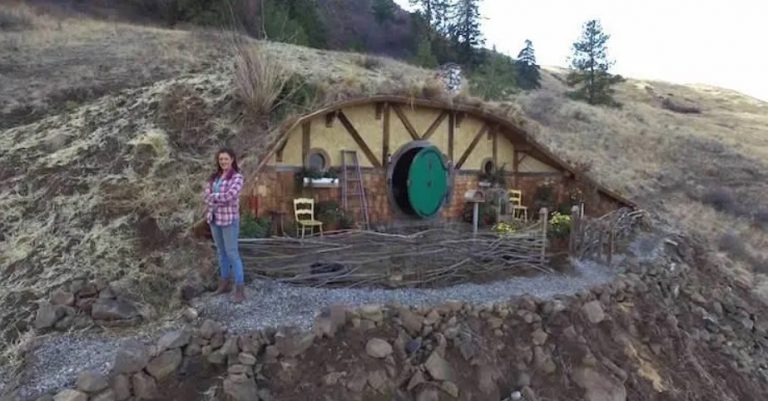 A hobbit hole-themed house for vacation stays in the state of Washington. (Image: Kristie Wolfe)

There is hardly any need to elaborate on the popularity and success of Airbnb, the customized property rental system aimed at tourists, but not all Airbnb setups are the same. There exist some unique Airbnb setups that Kristie Wolfe has designed. Also known as the Airbnb queen, she has designed and developed some of the most sought-after accommodations that have won her accolades universally.

Her life story is remarkable, and from her humble beginning, she has reached the height of success, owing to her innovative nature and desire to do something uncommon.

Inspired by her mother

Around 10 years ago, Kristie Wolfe was a high school dropout working on an Idaho potato farm. She came to know about the tiny house movement and then wanted to make one for herself. It was at an experimental stage then, and she had bought a small second-hand trailer with some savings from her job. She was able to set up a tiny home after spending just US$3,000.

She was inspired by her mother, who always tried to provide her children with nicer and bigger homes despite the cash crunch. Kristie Wolfe said: “She was always trying to make these crummy little houses we could afford fit our big family. It was fascinating to see how she’d figure things out. She didn’t have the Internet. There was no Home Depot in our town. So she just tried things and learned on her own.”

A treehouse, hobbit hole, potato house, and a shipwreck house

After making the tiny house, Kristie Wolfe started exploring Craigslist for cheap land. She found a small plot in Hawaii. Her mother aided her, and they inspected and purchased the property. They cleaned up the property well and built a little 230 sq ft treehouse. It cost them US$11,000.

They listed it on Airbnb in 2014, and the results were fantastic. She recovered her investments within three months. Tasting success with the Big Island Treehouse, Wolfe built several uniquely designed setups for Airbnb. She wanted to locate the structures in off-grid locations with an exceptional coolness to entice the customers.

Kristie Wolfe’s next project was a hobbit hole-themed house for vacation stays in the state of Washington. The cute hobbit hole has a round, green front door. The structure was on six acres of land. Wolfe bought 40 acres close to the setup to build a hobbit village.

Next, she set her eye on an abandoned fire lookout tower in Fernwood, Idaho. She added vintage kitchen utensils and a wood-burning stove. She also built a sauna. The tower was cozy and had stunning views.

Next, she set up a potato-shaped vacation place called The Big Idaho Potato Hotel. She used a 6-ton concrete potato obtained from the Idaho Potato Commission. The development led to a huge media buzz. Next, she installed ventilation, finished the walls, and put it in a bathroom to make it living-worthy.

Even after making four successful Airbnb properties, she did not want to quit. Kristie Wolfe said: “I live for that state of flow, where you forget to eat and don’t need anything. You’re just consumed by the creative process and the problem-solving. It’s like meditation. If you can build, you’ll always be okay.”

She next set her eyes on a lakeside property located in Salmon, Idaho. This will be turned into a shipwreck house. Her efforts and creativity have made Kristie Wolfe nothing short of a living legend in Airbnb circles. She chooses the properties in off-grid locations and her mother, now in her 70s, is there to help out.

She picks a distinct theme and design for each project, which has worked in her favor. There are hurdles in accomplishing these projects, as she admits. Setting up properties in remote locations makes installing amenities tedious. She has to use solar inverters and panels to equip her setups with a power supply. However, her hard work and sincerity have helped her ride over these obstacles.

Kristie Wolfe has resorted to effective measures to alleviate management issues while setting up these properties. For example, she uses Upwork for her press releases and offers free stays to obtain high-quality photos and user reviews. She also hires local caretakers for property maintenance and repairs.