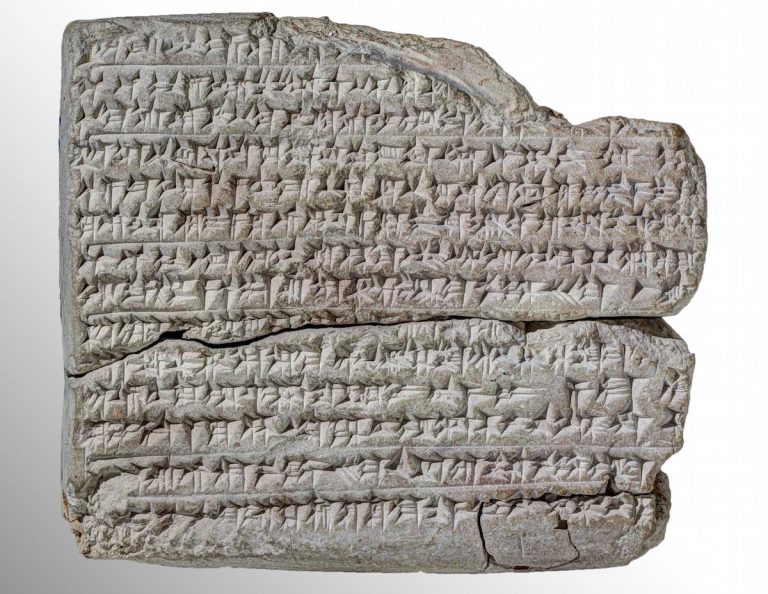 A Late Babylonian tablet spells out a ritual to quiet a crying child. (Image: Klaus Wagensonner via Yale Peabody Museum)

Even in the early days of human civilizations, parents sang soothing songs to calm down a crying child. A Late Babylonian cuneiform tablet was discovered that contained inscriptions of songs and rituals used by the Mesopotamians to soothe a crying child.

Babylon was a state in ancient Mesopotamia in what is current Iraq. The city of Babylon, whose ruins are located in modern-day Iraq, was founded more than 4,000 years ago as a small port town on the Euphrates River. It grew into one of the largest cities of the ancient world under the rule of Hammurabi.

The first known lullaby for a crying child

The ancient era tablet is on display at Yale’s Peabody Museum of Natural History. Historians and researchers believe its origins are Nippur, somewhere near current Baghdad. Deeply etched into a small clay tablet, which fits neatly into the palm of a hand, are the words of one of the earliest lullabies on record. Scholars believe these words likely originated in folk poetry that had been transmitted orally for years before being written down sometime between 500 B.C. and 300 B.C.

The writing is in the cuneiform script — one of the first forms of writing — and would have been carefully shaped by a Babylonian scribe with a stylus made of reed in modern-day Iraq.

It’s a rather menacing lullaby in which the baby is chastised for disturbing the house god with its crying — and threatened with repercussions.

Warding off evil spirits from a crying child

The words written on the tablet denote the child’s wailing will awaken Kusarikku, a bison-shaped house ghost. If that happens, the household members will face danger, it warns. The Mesopotamians believed in evil spirits and demonic beings and performed rituals to ward off such spirits. So the lullaby was more about keeping the family safe from harmful spirits than calming down the crying child.

The Mesopotamians did not distinguish between magic and science. They believed that miracles of nature and unexplained developments induced by spirits and invisible beings coexisted. This possibly led to the formation of such a lullaby. The thought may have stemmed from the high infant mortality rates of the time and the belief incessant crying could mean the worsening of an infant’s health.

Scholarly analysis of the ancient words

Historians and scholars have tried to interpret the tablet inscriptions. University of Chicago’s Assyriologist John Wee said: “We do not know exactly why the baby cried — and it would be overly speculative to insist on one specific medical explanation over another. The historian’s job is to put himself into ancient shoes and — in this case — appreciate how indigenous Mesopotamian culture and beliefs supplied an important enough reason to fear the threat of excessive human noise.”

If this sounds scarier than sleep-inducing, it so happens that many lullabies — including those sung today — have dark undertones.

“Rock, rock, rock,” begins one popular lullaby sung by the Luo people in western Kenya in Africa before warning starkly: “A hyena will eat the baby who cries,” — an actual possibility in some parts of the country.

A well-known English lullaby, Rock-a-bye Baby, also contains danger, warning that the baby and cradle will drop from the bough of a tree. The rhyme is believed to have first appeared in print in Mother Goose’s Melody in 1765 London.

Nighttime has always been associated with darkness and fear. This may explain the threatening themes in some lullabies, says Sally Goddard Blythe, author of several books on child development and director of The Institute for Neuro-Physiological Psychology.

But all lullabies — even the scary ones — are rooted in “love, tenderness, and caring.”