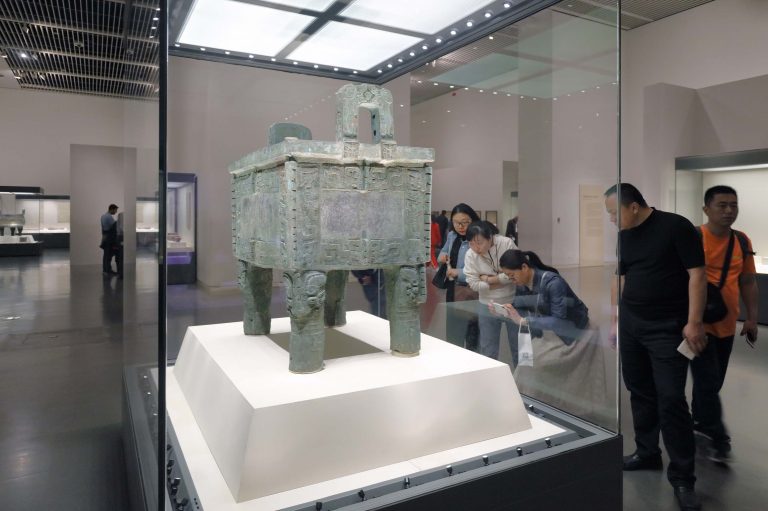 One of the greatest discoveries from China’s Bronze Age occurred in 1939 when a bronzeware piece from the Shang Dynasty, dated to be more than 3,000 years old, was found in Anyang City, Henan Province. It is known as the Simuwu ding.

It is said that Emperor Wending of the Shang Dynasty (1112-1102 B.C.) made the 4-legged ding to worship (si) his mother (mu) Wu. It is one of the best-known pieces of bronzeware in the world.

During the Shang and Zhou periods, the making and application of dings peaked. China’s Bronze Age civilization reached its zenith at this time. A ding became a symbol of the power and authority of the ruling emperor.

A sword for the King of Yue

In 1965, a bronze sword was found in Jinan City, Hubei Province. When the sword was pulled out of its sheath, the metal was shiny and sparkling. There was not a spot of corrosion on the sword after being buried underground for more than 2,000 years. The sword’s blades were thin and sharp. This was an exquisite example of China’s Bronze Age craftsmanship.

There are 11 carefully carved concentric circles at the bottom of the handle. On one side of the blade, there are eight engraved characters. Six of them are identified as Yue Wang Zi Zuo Yong Jian (This sword was made for the King of Yue).

The Qin Dynasty began in 221 B.C. Emperor Shihuang of the Qin Dynasty unified the calendars, words, currencies, and ways of measurement in China, and built the longest wall in the world — the Great Wall. The peak of China’s Bronze Age civilization gradually degenerated as the doctrines of Buddhism, Taoism, and Confucianism rose.