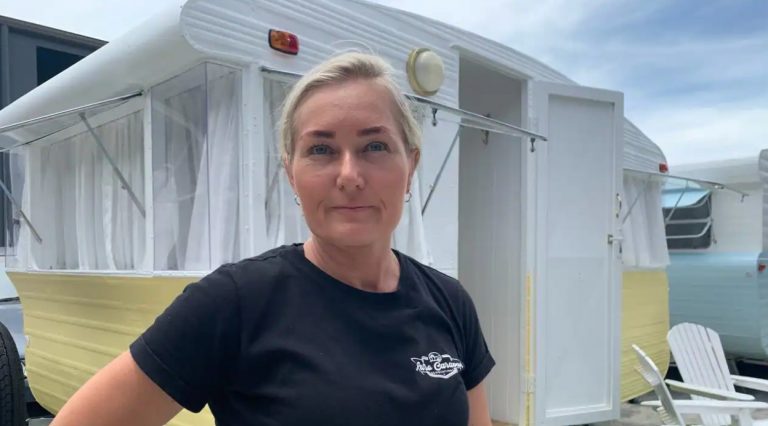 Jessica Driver with one of her restored caravans. (Image: via Instagram)

In Australia, caravans or travel trailers, if you live in North America, are pretty popular. Both residents and foreign tourists use caravans to explore the Australian wilderness. In addition, Australians holidaying at festivals spend huge amounts on long-distance trips. That explains why you see so many caravans on the roads. However, it is not only the brand new caravans that are thronging the Australian roads. You can also spot several restored vintage caravans.

A Queensland-based entrepreneur named Jessica Driver is on a mission to restore old-age caravans. She co-founded the company Retro Caravan Renovations. She restored many vintage caravans, and the results are amazing. This includes a yellow Franklin Freeway, produced from the late 1960s to the early 1970s.

She says, “Doing up a vintage van is a good investment. You’re purchasing a unique caravan, and just like with a vintage car, your vintage caravan will increase in value over time. But unfortunately, Franklin Freeway is a rare van, and the frame was completely disheveled. So we had to rebuild the entire van, essentially from the ground up. So we’ve done a full renovation: replacing the floors, the kitchen, cabinetry, and putting in a new ceiling and skylights.”

Jessica gives the aging caravans a fresh coat of paint both inside and out. She also loads the vehicles with modern amenities as present generation buyers cannot do without these, including air conditioning. Finally, she equips the vintage cars with new, soft fabrics and upholstery, lighting, and insulation.

One of them is Belle Power. Her revamped 1974 Viscount Supreme was restored to its former glory, which took nearly one year. She said, “I grew up in a Viscount van at Palm Beach on the Gold Coast. And as a child, I spent every school holiday in a caravan park in that van. I want my children to experience what I did, which was a great and adventurous childhood.”

Jessica says the Pandemic restrictions have caused an unforeseen jump in demand and her business is booming, and she had to hire more workers to speed up work. With the covid restrictions, people are hesitant to travel to other countries. Exploring Australia in a caravan is a safer choice. The same is true in North America, where the waiting list for even a new travel trailer can be months. However, restoring an old caravan takes even longer, and sometimes clients have to wait for as long as a year or two.

Jessica elaborated that she was inspired by her mother to do something different and profit. She said, “My mum was always renovating her home; it was like [painting] the Sydney Harbor Bridge. She would start from one end and then begin again. So we were always renovating. And then, later in life, I started doing property flips. We have five full-time staff members, including me. Cabinet makers, carpenters, fabricators, welders, and a few all-rounders.”

While the job is fulfilling, it also comes with many hurdles. The time and effort required can vary, and sometimes, locating restoration-worthy vintage vans is difficult. The cost factor is also there. A complete renovation may take approximately AU$25,000 (US$17,348).

The clients may also need expert guidance before buying second-hand caravans. Some such vehicles may be unfit for renovation, and some buyers may fail to understand the inherent flaws. The chassis may be damaged badly in some cases. However, in most cases, the results prove worth the labor. Jessica agrees with this, too.