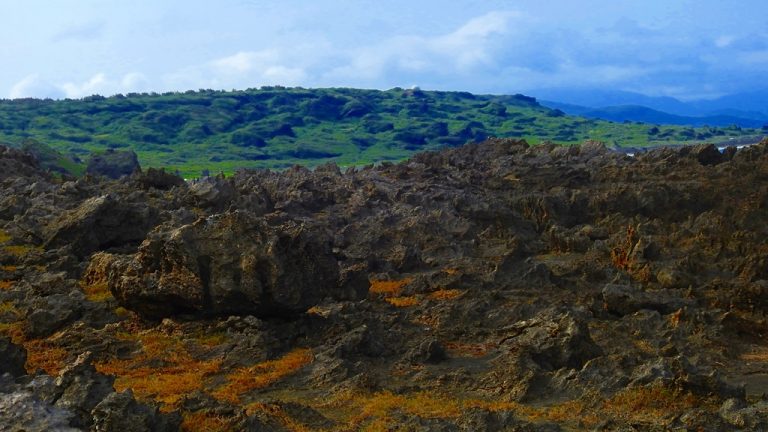 Please watch the following video for images of the Longkeng Ecological Protection Area in Taiwan:

With ​​approximately 61.7 hectares (152 acres), the terrain was designated an ecological reserve when Kenting National Park was established on January 1, 1984. Nonetheless, it was not open to the public until 1995.

Longkeng literally means “Dragon Pit.” It is commonly believed that this ecological reserve was named after the terrain’s shape because it looks like a dragon swaying its body on the shore.

Please watch the following video for additional images of the Longkeng Ecological Protection Area in Taiwan:

It is also said that the name of the reserve was derived from the Taiwanese homophone of its old name, ‘láng kāng (廊空),’ which means there are many holes in the reef valley.

Characteristics of the ecological protection area

There are different types of topography in the Longkeng Ecological Protection Area, such as coastal grassland, coral reef platform, fringing reefs, slumping cliffs, corrosion, and gorges created by wave-induced erosion.

This ecological protection area is rich in both flora and fauna. It is home to about 215 species of plants and a wide variety of birds, insects, and reptiles. The reserve is thus often referred to as a living classroom for exploring ecology and sustainability.

A spectacular trail passes the coastal windbreak woods from the entrance to the terrain facing the Pacific Ocean. Visitors can see a wide variety of precious plants and birds while walking along the trail. The trail is about 1.3 km long, and it takes 1.5 hours for a round trip to the reef valley.

Nestled at the trail’s end is the coastal grassland, the largest concentration of Silvery Messerschmidia and Pemphis acidula in Taiwan.

Passing the grassland is a winding wooden walkway that allows visitors to walk through the rough and wild coral reefs to take in the fantastic beauty of the terrain and the coastline.

A major environmental disaster in 2001

On January 14, 2001, the Greek-registered MV Amorgos ran aground approximately 1 km off the coast near the Lungkeng Ecological Protection Area due to bad weather. Around 1,300 tons of fuel oil leaked from the ship into the sea outside the ecological reserve, contaminating 6,987square meters (75,207 square feet) of the reserve. The spill polluted the water and seriously damaged the coastal ecological systems.

The Taiwanese EPA later sued the Norwegian insurer of the Amorgos for the damage caused by the oil spill. In March 2006, the EPA eventually settled with the insurer for a total of NT$34 million (US$1.05 million), and half of the amount was used for ecological restoration in this area.

Though two decades have elapsed, trace oil stains are still slightly noticeable on some coral reefs. Fortunately, there is no apparent long-term impact on the ecosystem and the unique landscape.