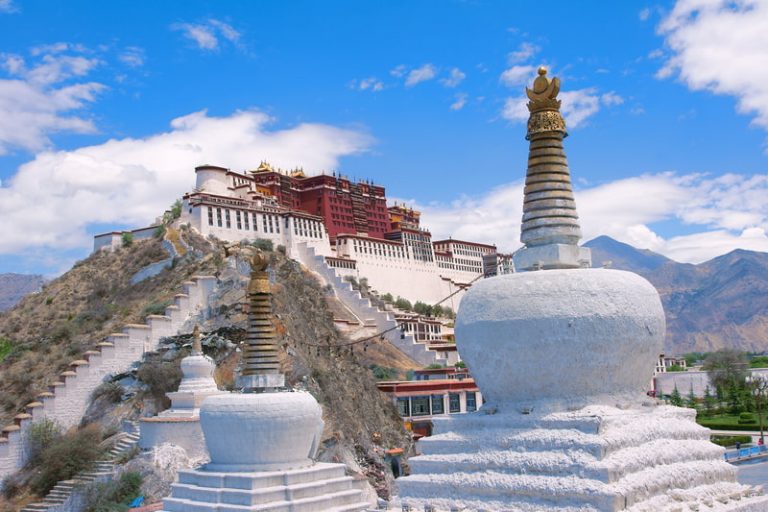 The Potala Palace in Tibet is a plateau palace with a long history that has attracted many people to view the style and architecture of the building for hundreds of years. This magnificent sanctuary holds many secrets that instill curiosity and reverence.

There is a magnificent palatial-style building complex atop Mar-po-ri (Red Mountain) 130 meters (426 feet) above the Lhasa River Valley that rises up dramatically from its rocky base in Tibet. It is called the Potala Palace.

It was originally built by Songtsen Gambo, the Tibetan king of the Tubo Dynasty in the 7th century. In later years, it was destroyed by wars and natural disasters, and it was rebuilt in the 17th century to become the winter palace of the Dalai Lamas of all dynasties, and the center of unity for politics and religion in Tibet. The Potala Palace was included in the first batch of national key protected sites in 1961, and it was subsequently inscribed in the World Cultural Heritage List in 1994.

Ding Changzheng, head of the management office of the Potala Palace, said: “According to historical documents, in order to ensure that the Potala Palace remains solid and permanent, iron juice was poured into the inner layers and sections of some of the walls to strengthen its seismic capacity. Going higher, there is no longer the stone and iron wall, instead, the walls are built with  ‘white horse grass’ that effectively reduce the weight of the wall at the same time it maintains the characteristics of heat insulation, ventilation as well as being insect-proof and mothproof. In addition, it is dyed red to become a blended part of the wall.”

The foundation of Potala Palace is very solid. A thick ridge wall is built with square stones. The solid palace wall supports its enormous mass. The base of the wall is 5 meters (16 feet) thick, buried deep into the rock formations of the mountain.  As the palace wall goes up, it gradually shrinks towards the top which is only 1 meter (3.3 feet) thick. The 100-meter (328-foot) high wall is flat like a knife, and the superb masonry work is breathtaking.

The subsequent Dalai Lamas expanded the palace several times. For example, after the 5th Dalai Lama passed away, his regent expanded it into a red palace, and after the 8th and 9th Dalai Lamas passed away, their rooms were transformed into a mourning hall. The Palace has undergone numerous transformations resulting in it becoming an extremely complex structure.

The person in charge and old craftsmen tried to check the rooms one by one, but with no conclusion. Tibetan architecture infers the number of rooms based on the number of pillars, but the structure of Potala Palace is extremely complex with many complex structures such as suites and compartments which cannot be calculated using traditional algorithms. Later, they invited some professionals in, but in the end, they were still at a loss. To this day, there is still no precise answer as to how many rooms the Potala Palace has.

Treasures in the Palace

It is said that the underground of the Potala Palace contains many treasures and precious books, and the interior of the underground palace is like a labyrinth full of intricate passageways. Ding Changzheng said: “The Potala Palace has no underground palace, only the foundation, and it is definitely not a labyrinth as believed by the outside world. The Potala Palace does preserve a wealth of historical relics, such as a vast sea of ​​murals, pagodas, statues, and a large amount of gold and silverware, porcelain, enamelware, and jade ware.  It also collects countless rare treasures, which means that it can be described as a precious art palace.”

In the 1980s, when the Potala Palace was undergoing the first phase of maintenance, the staff carried out an inventory check before the clean-up operation to remove more than a dozen truckloads of garbage.

Tibetans believe that the Potala Palace is sacred and inviolable, and it is the sacred place of Buddhism. Every item in the palace has divine nature. They think that even if something is trash, it will be unlucky to throw it away.  Small valuables scattered in the Potala Palace could be easily mixed in with garbage, and rare treasures may be discarded accidentally during cleaning. As a result, for the first maintenance and cleaning work, the personnel inspected each and every item in detail, and from the pile of garbage, they found treasures such as coral, turquoise, silver coins, and other treasures.