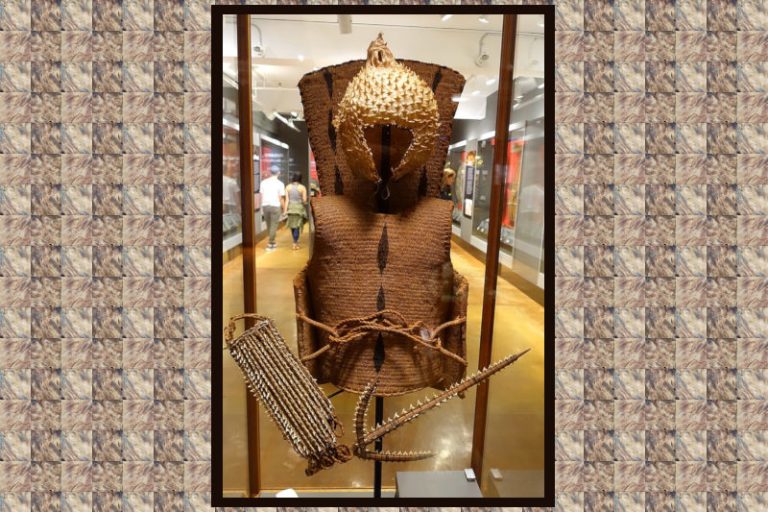 The sight of puffer fish ceremonial headwear, which has origins in the remote islands of Kiribati, can leave you awestruck. It looks fearsome with hardened spikes like those of a porcupine sticking outward.

There are several instances of ancient tribes in various countries using natural objects such as plant and animal body parts to make attire and even headgear. Examples of using animal skins, shells, tree bark, and leaves for making ceremonial headgear are not unheard of. However, it is not every day that you hear about tribal people wearing ceremonial headgear made up of fish skin!

This type of ancient origin headgear is rarely seen, but one of them is kept in the Smithsonian. It was donated by Isaac Brower who spent a long time in Fiji. The unique headgear is made up of puffer fish skin and coconut fiber. Western explorers have collected many pieces of such headgear in the last century out of sheer curiosity and many of the specimens can now be seen in the famous museums in many countries. The Smithsonian has three such helmets, and they can also be seen in the British Museum and Världskulturmuseerna of Sweden. You can also spot these specimens in some smaller museums across Europe.

While the specimens are awe-inspiring, not much is known about the whereabouts of the unique tribal headgear. The people who collected these fish skin helmets did not bother much to learn about their nuances. It is not clear if wearing the headgear gave the tribal people in Kiribati an advantage over their rivals in warfare.

It is a fact that people living on these islands do not have many resources and so end up using whatever plant and animal materials are at hand. They made extensive use of materials like coconuts, stingray barbs, and shark’s teeth. The puffer fish helmets are not sturdy, but they make the wearer look menacing and bigger, for sure. Kiribati warriors probably desired this intimidation part more than actual protection from enemies.

The top anthropologists think these helmets were used as part of rituals by the tribes on these islands. The headgear may look menacing, but it does not lend any practical combat advantage to the wearer. Anthropologist Maurizio Ali thinks making one piece of puffer fish ceremonial headwear would take a long time to make. The Kiribati tribe artisans are secretive about their rituals and practices. However, there is no denying making one such helmet involves a lot of effort, time, and craftsmanship. One has to kill the puffer fish when it is inflated, then bury it under the sand to harden its skin. There can be age-old rituals involved as well.

Noted British Museum curator Polly Bence says: “By using creatures that inhabit the surrounding waters in their armor, in the form of poisonous fish, shark teeth, and ray skin, Islanders were referencing their relationship with the ocean and its ancestors. If the porcupine fish was venerated as an ancestor and represented the spirit world, then perhaps fish helmets were reserved only for uea (chiefs) and were worn in order to imbue the wearer with the ocean’s power.”

Not all Kiribati fish headgear looks exactly the same. An I-Kiribati craftswoman named Rareti Ataniberu said each stitch used in the headgear conveys a meaning. She added: “There are no more wars in Kiribati, between Kiribati warriors. So, there are hardly any more Kiribati interested in the making of it.” However, since Kiribati became independent in 1979, there has been a renewed interest in producing the traditional armor. The locals want to preserve it as a symbol of their regional culture. They think it is a craft worth preserving.