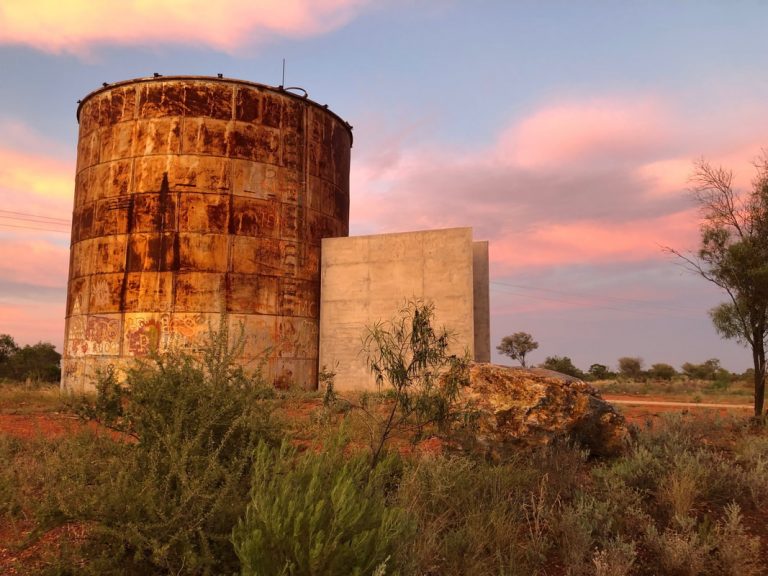 There are traditional musical instruments like the cello, piano, and violin, and there are several modern musical instruments. In ancient times, using natural objects to create music was quite commonplace. However, an old and deserted water tank has been converted into an acoustic masterpiece in an unusual development.

This feat was achieved by Charles Stuart, an engineer, famous composer, and noted architect. He and his team made the water tank into a musical venue for playing classical music.

The Cobar Sound Chapel, located in Australia’s New South Wales (NSW), was inaugurated on April 2, 2022. The team set up a five-meter-high cube inside the rusty water tank with a height of 10 meters. In it, classical music is played round the clock via an advanced quadraphonic sound system.

People visiting the innovative Sound Chapel will hear the acoustic rendition of String Quartet(s) by Mr. Georges Lentz, a Luxembourg-born composer and first violinist with the Sydney Symphony Orchestra. The sight of the rusty colossal water tank is rather unusual.

An old water tank is converted into the Cobar Sound Chapel

Mr. Lentz, who is the key figure behind the conversion of the water tank into a sound chapel, has spent several years in Sydney and is now 56 years old. He liked the town of Cobar when he first visited it in 2008. The town council wanted to tear down the structure, which was placed atop a hill, but Mr. Lentz did not like that idea. So he contacted veteran Australian architect Glenn Murcutt for alternative views. They met in 2016 and agreed to implement the concept of a musical site amidst the wilderness. First, of course, they had to spend some time picking the right idea and model.

Construction of the project commenced in late 2020, and the NSW government partially offered to fund the Cobar Sound Chapel. Another source of funding for the project came from Manuka Resources, a regional gold and silver mining entity.

The tank is cylindrical outside, but a cube-shaped room is inside it. The chapel is solar energy driven, which explains how the four speakers can play music 24×7. A hard bench is placed inside the cube room so that visitors exploring the venue can sit and listen. One pleasant aspect of the interior of the sound chapel is that it is 10 degrees cooler than outside.

The interior of the chapel has been carved with attention to detail. The roof is partly open, and the sunlight that seeps in from the top forms a heart shape on the chapel’s inner walls. As the innovative Cobar Sound Chapel is not sealed, the sound playing in its interior can be heard from a distance. The poem of William Blake, a noted English poet, has been inscribed on its side.

The project was implemented with input and assistance from people from varying backgrounds. The land where the chapel now sits belongs to the Wongaibon people, an Australian Aboriginal tribe. So Sharron Ohlsen, a regional Aboriginal artist, was part of the project. He set up window art inside the chapel. The old water tank was renovated and ready by 2021. However, the lockdown restrictions prevailing in NSW delayed the inauguration of the sound chapel.

The innovativeness and deployment of the idea have drawn much admiration. Noted engineer Peter Thew, a close associate of Murcutt, praised it. Mr. Thew said: “When I was approached to be involved in the project, I knew opportunities like this did not arise every day. The concept was highly intriguing as the design is unusual and the structural forms are unique. But as an engineer, I took it back to first principles, which is what we do when faced with an unusual task that we haven’t seen before.”

He added that the chapel is nothing short of a marvelous artwork.