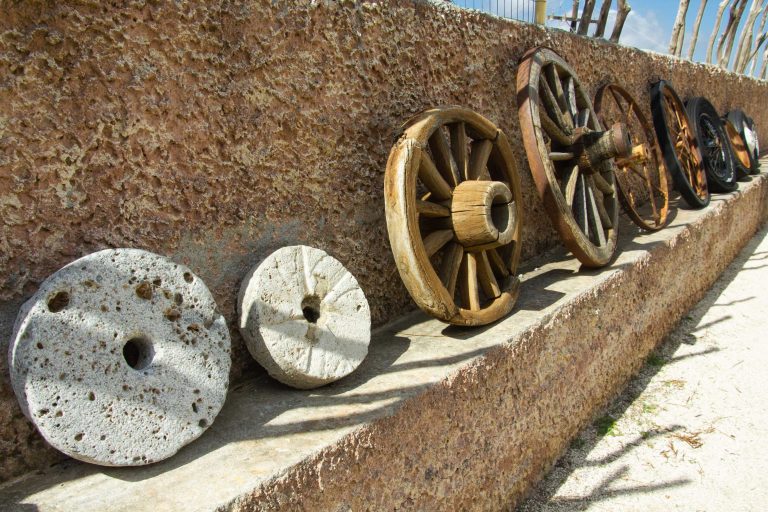 It is intriguing to think how ancient human inventions paved the way for the progress of science and technology in our present day. Examples such as making metal weapons, developing tools for agriculture, the discovery of fire, etc. Archaeologists have always wondered about the origin of wheels, an invention that helped humans take a big leap into the future. In a recent discovery, the earliest example of a wheel and cart has been discovered in a region in northern Germany. The set of tracks was found close to a cemetery near Kiel. Archaeology experts are of the opinion that the marks were created almost 3,400 years back, in the Neolithic period.

The cemetery is considered one of the biggest in Europe and its origins are traced back to the Stone Age. It was the era when humans were figuring out ways to set up stone monuments. Scientists found brown lines etched on the soil that resemble marks created by Neolithic wooden cartwheels. The distance between two marks makes them think it was a Neolithic wagon axle. However, there are other archaeologists who believe in the older theory saying the oldest wheel and cart were invented even earlier. The wooden wheel discovered in a Ljubljana Marsh adjacent to Slovenia’s capital is deemed as the oldest specimen of a wheel. It dates back to approx. 5,150 years.

Archaeologists used to think that the earliest animal-drawn carts were made somewhere in the Middle East. It was there that humans learned how to domesticate cattle. The recent discovery of these wheel and cart tracks however hint at the possibility of Europeans inventing the technology around the same time. Noted Archaeologist Johannes Müller, associated with the Kiel University, said that people in Central Europe also developed skills in technologies much like their contemporaries in the Middle East.

There exist plenty of megaliths at the burial ground in Flintbek, large stone graves some of which date back to 12,000 BC. Earlier, archaeological excavations revealed several megaliths in many parts of Europe, and their architectural style left viewers impressed. Examples include Carnac in France and Stonehenge in England. At the German cemetery, several Stone Age megalithic graves have been found. By deploying carbon-14 dating methods, the dates of these graves have been found to be near 5800 BC. So it is quite clear that people in those times learned to use stone in a number of ways. They probably made use of cattle to carry those stone pieces and made the structures in those days.

Archaeologists have learned about burial habits and techniques used by people in ancient Europe by examining the cemetery in detail. It was not only about using stone carts. Where the wagon wheel and cart track marks have been found, researchers also discovered several crescent-shaped grave monuments. The sickle shape was developed in various stages, they assume. The grave architecture style however was changed by 3300 BC. People started making passage graves- big-sized stone chambers with stone entrances. Archaeologists assume the cemetery was used by the people residing in the nearby regions for a long time.

The inconspicuous brown lines found on the soil have made the researchers think that people in that region made use of stone carts to fetch stone pieces to the burial ground and then they made those structures. This discovery poses a challenge to the earlier theory of carts and wheels being invented in the Middle East region for the first time. Researchers are sure such important findings throw light on the inventions made by European tribes in the ancient ages.