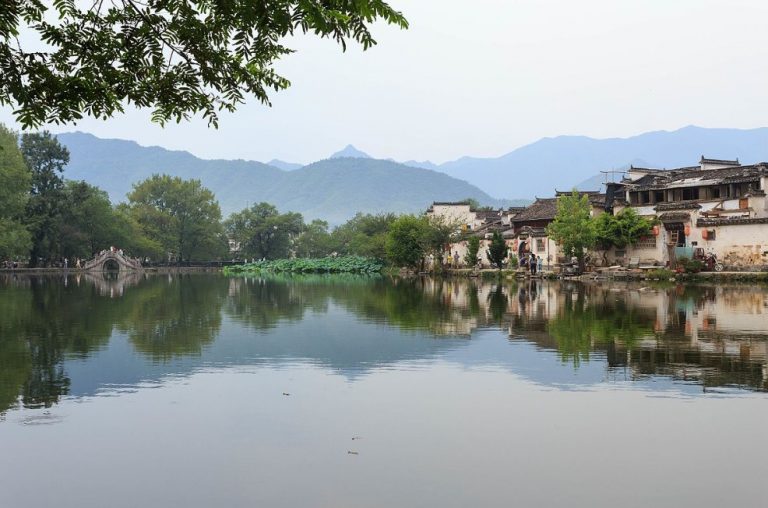 Most visitors conclude that Hong Village differs from other villages due to its well-preserved houses and how they harmonize with the beautiful surroundings. (Image: via Wikipedia)

You might have heard much about ancient villages and towns in China. Here, we list several of the most beautiful ancient villages in China, where you can experience the local peaceful lifestyle, the ancient architecture, and the graceful landscapes.

These villages include ethnic villages with unique architectural styles, beautiful natural landscapes, and peaceful, untouched villages with picturesque scenery. Photographing, hiking, and visiting local families are recommended things to do in these ancient villages.

Hong Village evolved during the Ming and Qing dynasties and is located among green hills and clear winding streams. The village, covering 30 hectares, is famous for its water-supply system. A bird’s-eye view of the shape of the village is that of a resting water buffalo.

The running water flows in winding ditches to every household, and it ends in a little lake at the entrance of the village. The peaceful environment and beautiful surroundings provide outsiders with a pleasing and tranquil picture of typical country life in southern China.

Visitors are attracted to the village by its beautiful views and more than 140 well-preserved ancient houses, which sit several magnificent clan halls. Inside these ancient houses are splendid wood carvings on each beam and column.

Most visitors conclude that Hong Village differs from other villages due to its well-preserved houses and how they harmonize with the beautiful surroundings. The village was added to the World Cultural Heritage Sites by UNESCO in 2000.

This village is located in the north of Sichuan Province. There are only about 160 Zang families in this ancient village. The houses are built in the traditional Jiarong style with painted yellow, black, and white bands. Each home has four white stone towers at each roof corner to represent the four cardinal directions.

The homes are designed for the hilly terrain and accommodate Tibetan culture. The flat roofs serve multiple functions, including space for prayers and the drying of harvested grains. Livestock is kept on the ground floor, with living quarters and a small chapel on the upper floors. The village is enchanting, and the warm hospitality of the local people adds to the magic.

The vibrant colors and intricate designs adorning the buildings are not gaudy but work in harmony with the natural surroundings. A modest guest house meets the basic needs of visitors by providing a hard bench for sleeping and a hearty supper. The locals are proud of their culture and often entertain visitors with their traditional Guozhuang dance.

3. Village of Aletaituwa in Xinjiang

This village is located in Kanas, Xinjiang. Around 80 Tuwa families live in this ancient village. In Mongolian, Kanas means “rich, beautiful, mysterious, and enigmatic.” The villagers practice Buddhism and have preserved their traditional beliefs. Religious and traditional festivals are always joyful events, while the landscape tempts every visitor to experience nature.

Apart from the ancient Tuva Mongol, visitors can also enjoy the local customs and life with the hospitable Kazakh families in the Hemu Grassland. If you want to spend the night at Kanas Lake, you can live with local families or rough it in a tent. You can also stay in Kanas Shanzhuang, where you will find a greater variety of services and accommodations. But it’s recommended that you stay with local families in Hemu Village if you want to experience a taste of the “old days.”

4. Guoliang Village in the Taihang Mountains of Henan

Guoliang Village is located in the Taihang Mountains of Henan Province. It was built during the late West Han Dynasty. It was named Guoliang Village in honor of the peasant leader Guoliang. This village is a world of stone: Stone houses, stone walls, stone tables, stone chairs, and stone beds.

In autumn, a million hues of yellows, golds, oranges, and reds play off the sheer cliff walls that envelop the area and fill the lower elevations. This village is famous for the Guoliang tunnel, which was a winding path carved into the rock that used to link the remote village to the outside world for many years.

The villagers eventually decided to dig a tunnel through the rocky cliff. Led by the village head, Shen Mingxin, village members sold goats and herbs to purchase hammers and steel tools. Thirteen strong villagers began the project. It eventually took five years to finish the 1200-meter-long tunnel. Some of the villagers even died during its construction. Finally, on May 1, 1977, the tunnel was opened to traffic.

The tunnel wall is uneven, and there are more than 30 “windows” of different shapes and sizes. Some windows are round, and some are square, and they range from dozens of meters long to a standard size window. It is frightening to look down from the windows, where one sees strange rock formations that form the sheer cliffs above and below.

The Baoshan Stone City has existed for thousands of years. The Naxi people built the town on a massive rock in ancient times. They developed from a nomadic ethnic group, and their relocation from northwest China to the bank of the Jinshajiang River continued for a thousand years. Today, just over 100 families live here. They still keep to their ancient traditions and lead a simple life on this giant rock.

The villagers use stones to build everything, including houses, desks, tables, beds, pillows, water vats, cisterns, and kitchen cooktops. All stone objects are polished until they are smooth. They have maintained a record of their lives for centuries. The most wonderful thing about the village is the independent aqueduct/irrigation system. The villagers use the system for each track of their fields.

Located at the border of Yunnan Province and Guangxi Zhuang Autonomous Region, Guangnan is a typical karst area.

The famous Chinese writer Tao Yuanming, who lived during the Eastern Jin Dynasty (317-420), once described a legendary land called Peach Blossom Valley, wholly isolated from the rest of the world. People lived there in peaceful, serene isolation. The description of Tao Yuanming’s vision came true with the discovery of Bamei Village.

Without cars, electricity, telephones, or televisions, local villagers live a primitive, self-sufficient life by fishing, hunting, and farming. They plant corn, sugarcane, and tropical fruits at the foot of mountains and grow rice near the riverside. The traditional Zhuang culture and customs have also been maintained.

Most villagers live in traditional Malan houses, a kind of diao jiao lou. Their customs and festivals are also well preserved. The Devil Festival, the Ox Soul Festival, and the Singing Festival are all celebrated grandly.

People sing folk songs at their most important events, which is their way of interacting with others and expressing their feelings. Every summer, senior villagers hold a memorial ceremony for “the god of the river” in the hopes of a good harvest. During the off-season, villagers organize various events, like cockerel racing.

Zili Village is located in Tangkou Town, Kaiping City in Guangdong Province. It has long been a hometown for immigrants, many of whom brought with them the ideas and architectural styles of the West. As a result, the diaolous (large castle-like houses) primarily use Romanesque, Islamic, Baroque, and Rococo architectural styles and decorative forms.

They are mainly made of reinforced concrete, rare in Asia in the early 20th century. On the exterior, the buildings are unmistakably Western in style; but inside, everything from the frescoes to the utensils is of traditional Chinese style. Zili Village consists of three sub-villages constructed between 1821 and 1920.

There is a cluster of nine Diaolou and a group of six Western-style villas, along with single-story houses. The single-story houses sit among the paddy fields and are built with blue bricks and tiled roofs. Most homes have a layout known as “three sections/two gates.”

The diaolous were built in the 1920s and under similar circumstances. Their owners were prosperous emigrants from places such as Malaya and even Chicago in the United States, but who decided to return to their roots in China.