The Old Man Under the Moon 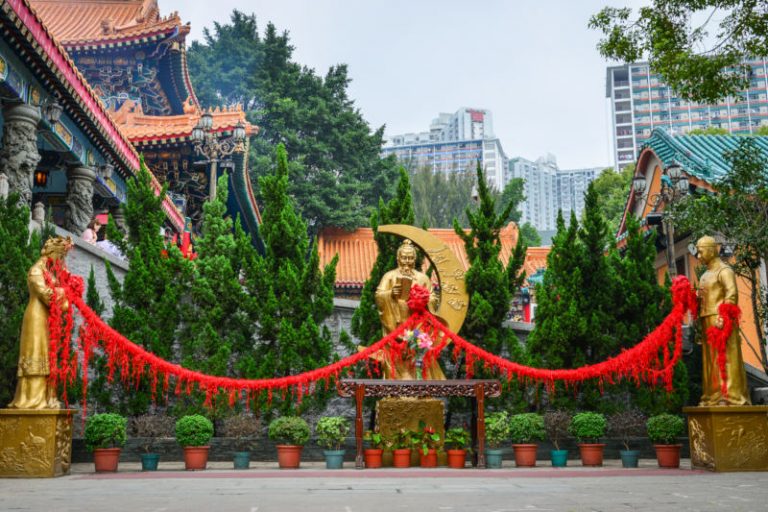 Statue of Yue Lao, the 'God of Marriage', with red strings connected to statues of a man and woman indicating their predestined relationship as husband and wife. (Image: Phuongphoto via Dreamstime)

During the Tang Dynasty, a man named Wei Gu traveled to Songcheng and stayed at the Nan Hostel. One night, while Wei Gu was walking down the street, he saw an elderly man sitting on the ground under the moonlight. The old man was sitting next to a stack of books filled with red strings; he was flipping through a large book.

Wei Gu was curious and asked the old man what he was reading. He replied: “This book documents all of the marriages in the world.” Wei Gu then asked: “What about the red strings in your sack of books?” The old man said with a smile:

Wei Gu was skeptical, yet he could not contain his curiosity. He wanted to ask the old man more questions, but the old man stood up and headed for the rice market with his books. Wei Gu decided to follow him.

The old man tells Wei Gu who he will marry

When they arrived at the rice market, they saw a blind woman holding the hand of a 3-year-old girl. The old man told Wei Gu:

“That little girl holding the blind woman’s hand is your future wife.”

Wei Gu became furious upon hearing this, as he thought the old man was making fun of him. He told his servant to follow and kill that little girl so that she would not be his future wife. The servant later approached the girl and cut her once with a knife, before running away. Afterward, Wei Gu searched for the old man, but he had disappeared.

Fourteen years later, Wei Gu found a girl that he wanted to marry. In fact, the girl was none other than the daughter of the governor of Xiang prefecture, Wang Tai. She was very beautiful, but she had a scar between her eyebrows. Wei was very curious, so he asked his future father-in-law: “Why is there a scar between your daughter’s eyebrows?”

The prefectural governor replied: “It sounds quite ridiculous, but 14 years ago when her nanny took her for a walk in the Songcheng rice market, a ruffian appeared out of nowhere and cut her with a knife. Fortunately, she escaped with her life, but she still has a scar on her forehead.”

Wei Gu was shocked and wondered whether this woman was the girl that his servant had stabbed so many years ago. He asked his future father-in-law nervously: “Was that nanny blind?”

Wang Tai replied: “Yes, the nanny was a blind woman, but how do you know that?” Wei Gu was completely dumbfounded and told his future father-in-law what had happened. When he heard the story, Wang Tai was also very surprised to hear that the old man with the books had told the truth.

This story spread to Songcheng and the Nan Hostel, which was renamed the “Marriage Hostel” by the locals in order to commemorate the appearance of the old man under the moon — the God of Marriage.