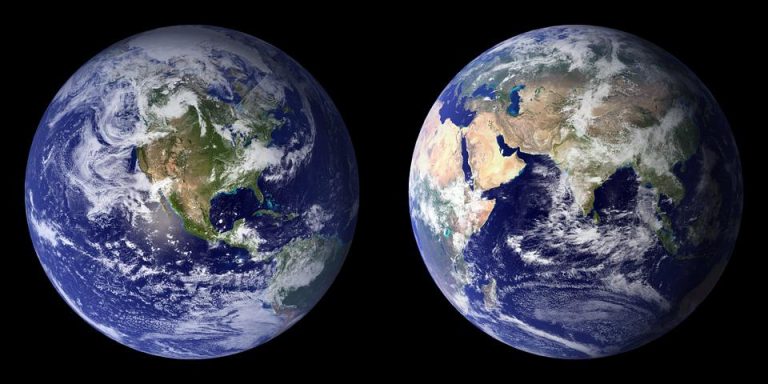 Scientists for the first time have found strong evidence that RNA and DNA could have arisen from the same set of precursor molecules even before life evolved on Earth about four billion years ago. The discovery, published in Nature Chemistry, suggests that the first living things on Earth may have used both RNA and DNA, as all cell-based life forms do now.

In contrast, the prevailing scientific view—the “RNA World” hypothesis—is that early life forms were based purely on RNA, and only later evolved to make and use DNA. Co-principal investigator Ramanarayanan Krishnamurthy, Ph.D., associate professor of chemistry at Scripps Research, said:

“These new findings suggest that it may not be reasonable for chemists to be so heavily guided by the RNA World hypothesis in investigating the origins of life on Earth.”

Krishnamurthy and his lab worked on the study with the lab of John Sutherland, DPhil, of the UK Medical Research Council’s Laboratory of Molecular Biology at Cambridge, as part of the New York-based Simons Foundation’s Collaboration on the Origins of Life.

RNA (ribonucleic acid) and DNA (deoxyribonucleic acid) are chemically very similar, but chemists have never been able to show how the one could have been converted to the other on the early Earth, except with the help of enzymes produced by early organisms. Due in part to this lack of a demonstrated pre-life or “pre-biotic” chemical path connecting RNA to DNA, researchers in this field have been inclined to think that the simpler, more versatile one, RNA, was the basis for the first life forms — or at least for an early stage of life prior to the emergence of DNA. RNA is able to store genetic information as DNA can, is able to catalyze biochemical reactions as protein enzymes can, and otherwise probably could have performed the basic biological tasks that would have been necessary in the first life forms.

Although origin-of-life researchers in recent decades have largely come to embrace the RNA World hypothesis, Sutherland, Krishnamurthy, Harvard’s Jack Szostak and others have accumulated evidence that RNA and DNA may have arisen more or less all at once in the first life forms. In a study published in 2017 for example, Krishnamurthy and colleagues at Scripps Research identified a compound that plausibly was present on the pre-biotic Earth and could have performed the crucial task of linking RNA building blocks into larger, chain-like RNA strands — and could have done the same for the building blocks of DNA and proteins.

In the new study, the scientists combined insights from that investigation with recent findings from Sutherland and his lab on a compound called thiouridine. The latter was likely present on Earth before life arose, and could have been a chemical precursor of the nucleoside building blocks of early RNAs. The team showed that in a few chemical-reaction steps, which plausibly could have occurred in a pre-biotic world, they could convert this precursor of an RNA building block into a DNA building block — deoxyadenosine, which forms the letter “A” in the modern, four-letter DNA code. Alternatively, they could convert thiouridine into deoxyribose, which is very closely related to deoxyadenosine and may also have been a precursor of early DNA building blocks.

The finding should make it easier for scientists to accept the possibility that RNA and DNA arose together and were included in the first life forms. Some researchers including Sutherland have suggested that RNA and DNA might even have been mixed together to make the first genes. No such organism is known to occur naturally now, but a recent paper by Scripps Research’s Peter Schultz, Ph.D. and colleagues described an engineered bacterium that can survive with genes made of an RNA and DNA mix.

Krishnamurthy suspects that, however life arose, RNA and DNA with their respective strengths and shortcomings would swiftly have sorted themselves into the rather strict division of labor seen in all cells today: DNA for the stable long-term storage of genetic information, and RNA for its own special set of tasks including the short-term storage and transport of genetic information and the making of proteins, Krishnamurthy said:

“There is the beginning of a realization in the field that RNA and DNA could have been mixed together initially but later separated according to the things they do best.”

The authors of the study, “Prebiotic Phosphorylation of 2-Thiouridine Provides Either Nucleotides or DNA Building Blocks via Photoreduction,” were Jianfeng Xu, Nicholas Green, and John Sutherland of MRC, and Clémentine Gibard and Ramanarayanan Krishnamurthy of Scripps Research.

Provided by Scripps Research Institute [Note: Materials may be edited for content and length.]