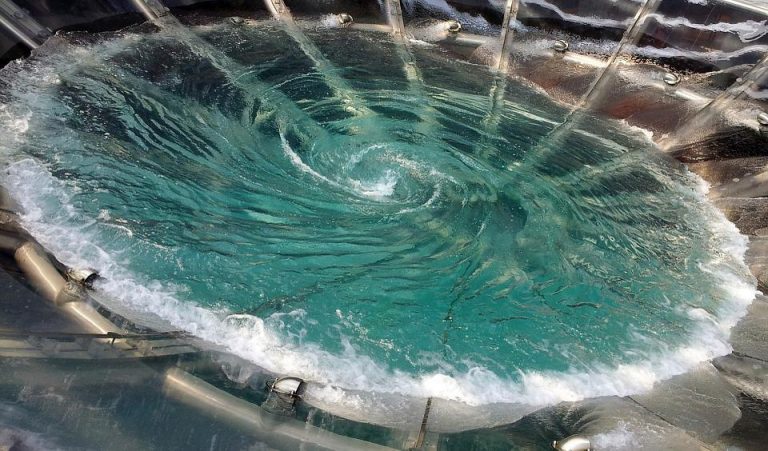 Lancaster researchers have developed a camera-like device able to image mini whirlpools in quantum liquids for the first time ever. (Image: via Pixabay)

Lancaster researchers have developed a camera-like device able to image mini whirlpools, quantum vortices, in quantum liquids for the first time ever. Vortices form in stirred fluids when water drains into a plughole and can also be seen in tornadoes and cyclones.

These vortices are unpredictable, unlike in quantum liquids where the quantum vortices always have the same size due to quantum effects that only arise at very cold temperatures such as with the superfluid liquid helium-3. The problem is that quantum vortices by their very nature are too small to be captured without tracer particles by a conventional camera — until now.

Physicists at Lancaster University led by Dr. Theo Noble have developed a new type of camera that uses particle-like disturbances to take images of collections of vortices instead of light. Their work is published in the journal Physical Review B.

The camera is a five-by-five array of pixels. Each of the 25 pixels is a millimeter-sized cylindrical cavity with a quartz tuning fork in the middle. The team tested the camera on quantum vortices created by a vibrating wire in a form of ultra-cold helium. Dr. Theo Noble explains:

“The experiment works like shining a torch on a shadow puppet. We then measure the shadows cast by quantum vortices across the camera.”

Even with its low number of pixels, the new camera uncovered that most quantum vortices form above the vibrating wire instead of developing all around it. The Head of the Ultra Low-Temperature Laboratory at Lancaster University Dr. Viktor Tsepelin said that this was not predicted by mathematical theories or numerical simulations.

Dr. Tsepelin’s goal now is to build a 90-pixel camera with a high enough resolution to image the details of the development and decay of carefully prepared collections of vortices. This ability to observe the dynamics of superfluid helium-3 will improve the understanding of the turbulent motion of quantum fluids and turbulence in general. Dr. Viktor Tsepelin said

“It is exciting to see that our prototype is working. The high-resolution camera could also be used to image other topological defects existing in superfluid helium-3 allowing us to have a glimpse at an analogue of the Early Universe.”