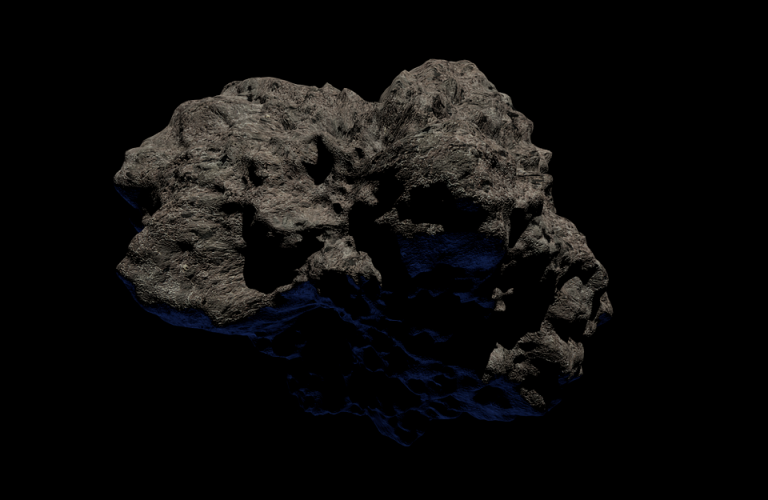 Samples from asteroid Ryugu suggest it’s leftover from formation of the sun billions of years ago. (Image: via Pixabay)

After a six-year journey, a plucky spacecraft called Hayabusa2 zinged back into Earth’s atmosphere in late 2020 and landed deep in the Australian outback. When researchers from the Japanese space agency JAXA opened it, they found its precious payload sealed and intact: a handful of dirt that Hayabusa2 managed to scoop off the surface of a speeding asteroid.

Scientists have now begun to announce the first results from the analysis of this extraordinary sample. What they found suggests that this asteroid is a piece of the same stuff that coalesced into our sun four-and-a-half billion years ago. Geochemist Nicolas Dauphas, one of the three University of Chicago researchers who worked with a Japan-led international team of scientists to analyze the fragments, said:

“We previously only had a handful of these rocks to study, and all of them were meteorites that fell to Earth and were stored in museums for decades to centuries, which changed their compositions. Having pristine samples from outer space is simply incredible. They are witnesses from parts of the solar system that we have not otherwise explored.”

In 2018, Hayabusa2 landed atop a moving asteroid named Ryugu and collected particles from above and below its surface. After spending a year and a half orbiting the asteroid, it returned to Earth with a sealed capsule containing about five grams of dust and rock. Scientists around the world have been eagerly anticipating the unique sample — one that could help redefine our understanding of how planets evolve and how our solar system formed. Scientists are particularly excited because these particles would never have reached Earth without the protective barrier of a spacecraft. UChicago geochemist Andrew M. Davis, another member of the analysis team, said:

“Usually, all we get to study of asteroids is the pieces that are big enough to make it to the ground as meteorites. If you took this handful and dropped it in the atmosphere, it would burn up. You would lose it, and a lot of evidence about the history of this asteroid would go with it. We really haven’t had a sample like this before, It’s spectacular.”

The first compilation of these results, reported in Science, reveal the makeup of Ryugu. The rock is similar to a class of meteorites known as “Ivuna-type carbonaceous chondrites.” These rocks have a similar chemical composition to what we measure from the sun and are thought to date back to the very beginnings of the solar system approximately four-and-a-half billion years ago — before the formation of the sun, the moon and Earth.

Back then, all that existed was a gigantic, rotating cloud of gas. Scientists think that most of that gas was pulled into the center and formed the star we know as the sun. As the remnants of that gas expanded into a disk and cooled, it transformed into rocks, which still float around the solar system today; it appears Ryugu may be one of them. Scientists said the fragments show signs of having been soaked in water at some point, Dauphas said:

“One must picture an aggregate of ice and dust floating in space, that turned into a giant mudball when ice was melted by nuclear energy from the decay of radioactive elements that were present in the asteroid when it formed. But surprisingly, today the rock itself appears to be relatively dry.”

Using radioisotope dating, they estimated that Ryugu was altered by water circulation only about five million years after the solar system formed. These findings are particularly interesting to researchers because they hint at similar formation conditions between comets and some asteroids such as Ryugu, Yokochi explained:

“By examining these samples, we can constrain the temperatures and conditions that must have been occurring in their lifetimes, and try to understand what happened.”

She compared the process to trying to figure out how a soup was made, but with only the final result rather than the recipe:

“We can take the soup and separate the ingredients, and try to tell from their conditions how much it was heated and in what order.”

The scientists noted that a percentage of the find will be set aside so that we can analyze them in the future with more advanced technology — much as we did with lunar samples from Apollo, Davis said:

“After we got moon samples from Apollo 50 years ago, our ideas about how the moon formed completely changed. We’re still learning new things from them, because our instruments and technology have advanced. The same will be true for these samples. This is a gift that keeps on giving.”

This mission is the first of several international missions that will bring back samples from another asteroid named Bennu, as well as unexplored areas on our moon, Mars, and Mars’ moon Phobos. This should all be taking place in the next 10 to 20 years, Dauphas said:

“It has been very much under the radar for the public and some decision makers, but we are entering a new era of planetary exploration that is unprecedented in history. Our children and grandchildren will see returned fragments of asteroids, Mars, and hopefully other planets when they visit museums.”

Provided by Louise Lerner, University of Chicago [Note: Materials may be edited for content and length.]