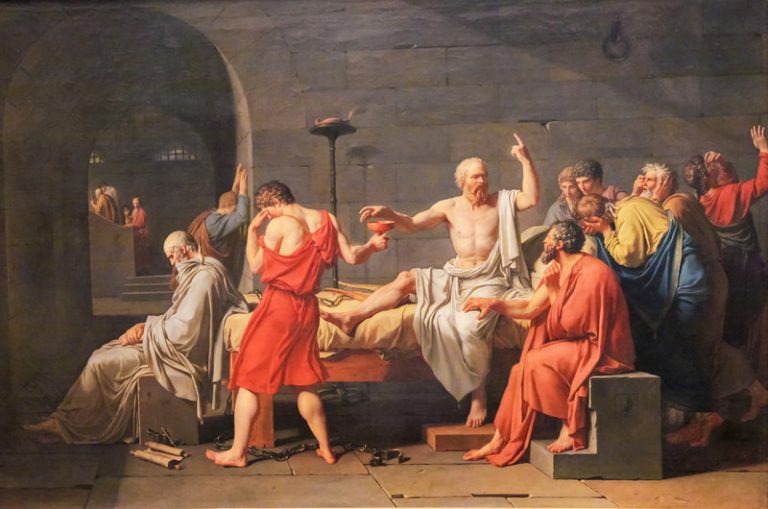 "The Death of Socrates," painted by Jacques-Louis David. (Image: Jorisvo via Dreamstime)

One evening in June 399 B.C., an elderly man in his seventies named Socrates was languishing in an Athens jail and was about to be executed. He was ragged in dress, with messy hair and bare feet, yet he appeared calm. After saying farewell to his family, he chatted animatedly with friends, seemingly oblivious to the forthcoming execution. He didn’t stop talking until the jailer came in with a cup of poison called hemlock. On receiving it, he drank it without objection. Afterward, he lay down, closed his eyes, and passed away peacefully.

Socrates (Greek: Σωκράτης, 469-399 BC), was a well-known ancient Greek philosopher. He was born poor; his father was a carver, and his mother was a midwife.

In his youth, Socrates learned carving from his father and worked carving stone statues. Later, he taught himself the writings of the ancient philosophers, geometry, astronomy, music, and poetry. He became expertly acquainted with the Homeric epics and other famous poetic works.

When Socrates was in his thirties, he mainly imparted knowledge as a social ethics teacher free of charge and in outdoor classrooms. Then, in his forties, he became Athens’ most famous and wisest person.

Socrates was a maverick with a distinctive personality. Whether in scorching summer or freezing winter, he always wore an ordinary robe and no shoes. Socrates didn’t care about eating, but was dedicated to studies and living a hard life. He often talked about the issues of war, politics, ethics, and philosophy with various people in public places, such as markets, sports fields, and streets.

Socrates never recorded his wisdom and philosophy in his lifetime. Instead, most of his speeches and thoughts were found in the writings of Plato’s Dialogues and Xenophon’s Memoirs of Socrates. Nonetheless, his influence on later Western philosophy was huge, and historians even regard him as a watershed in the development of ancient Greek philosophy, using his name to classify any Greek philosophy before his time as being “Pre-Socratic.”

His words of wisdom have often been used as a guide to morality and proper behavior in subsequent ages. In European culture throughout history, Socrates has always been regarded as a saint who died in pursuit of the truth, almost the same as the Asian Confucius in Chinese history.

Socrates’ philosophy was mainly focused on exploring the problem of ethics, advocating that people should know the truth of being a man and live a moral life. His famous saying “Virtue is knowledge” revealed Heaven’s secret: “Virtue can lead to wisdom.”

The proposition of ‘knowing one’s ignorance’

Socrates raised the proposition of “knowing one’s ignorance,” claiming that only those who give up their search for nature and admit their ignorance are wise.

Socrates believed that God is the sovereign of the world, that God creates and arranges everything, and that creation embodies the wisdom and purpose of God. So God is the most knowledgeable, and knowledge ultimately comes from God. Therefore, he opposed exploring nature, while advocating that the purpose of philosophy was not to realize nature, but to “realize oneself.”

Because of this understanding and theory, sometimes some people thought that Socrates was trivializing the status of natural science. However, from the viewpoint of the ancient and modern world, at that time, Socrates understood the relationship between “Heaven” and the “individual” and the different results between “inner cultivation” (pursuing harmony with Heaven) and “outward seeking” (exploring knowledge of nature).

Socrates thought that all walks of life and even state power should be managed by well-trained and knowledgeable persons, opposing democracy by election.

His understanding struck at the interests of some democratic slave owners. Some accused him of being close to Critias, a political figure who was part of a group known as the Thirty Tyrants, who maintained a violent rule over Athens for a short period of time. He was also accused of opposing democracy, introducing new gods and being impious to Athens deities, and poisoning the youth with heresy. Thus, Socrates was arrested and imprisoned.

It would not be an exaggeration to say that this was a case of unjust imprisonment due to political interests and the jealousy and slander of the rich and powerful. The result of the trial was that Socrates had to choose between abandoning his principles and leaving the city or death by drinking poison. Not to speak or teach and to be banished was not something he could countenance. Finally, Socrates chose poison and was thus sentenced to death.

Socrates insisted that to be a citizen of Athens, one must obey the laws of Athens. While in custody, his friends desperately persuaded him to escape after bribing the jailers and making an escape plan, but he would rather die than violate his beliefs. This is how the 70-year-old philosopher left the world calmly.