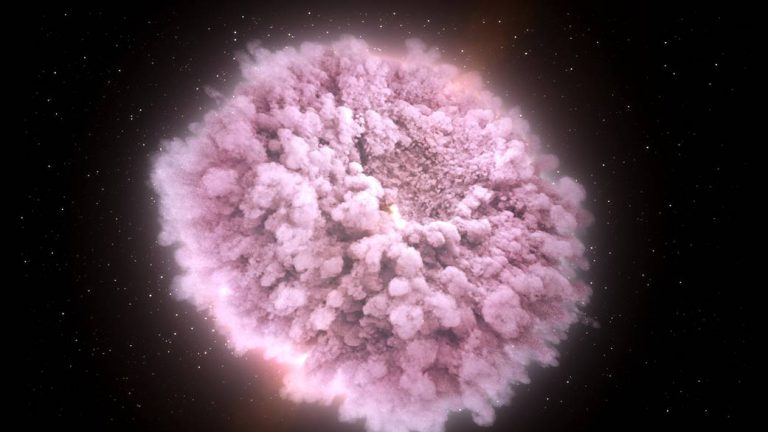 An international research team has for the first time combined data from heavy-ion experiments, gravitational-wave measurements, and other astronomical observations using advanced theoretical modeling to more precisely constrain the properties of nuclear matter as it can be found in the interior of neutron stars. The results were published in the journal Nature.

Throughout the Universe, neutron stars are born in supernova explosions that mark the end of the life of massive stars. Sometimes neutron stars are bound in binary systems and will eventually collide with each other. These high-energy, astrophysical phenomena feature such extreme conditions that they produce most of the heavy elements, such as silver and gold. Consequently, neutron stars and their collisions are unique laboratories to study the properties of matter at densities far beyond the densities inside atomic nuclei. Heavy-ion collision experiments conducted with particle accelerators are a complementary way to produce and probe matter at high densities and under extreme conditions.

New insights into the fundamental interactions at play in nuclear matter

Sabrina Huth, Institute for Nuclear Physics at Technical University Darmstadt, who is one of the lead authors of the publication, said:

“Combining knowledge from nuclear theory, nuclear experiment, and astrophysical observations is essential to shedding light on the properties of neutron-rich matter over the entire density range probed in neutron stars.”

“We find that constraints from collisions of gold ions with particle accelerators show a remarkable consistency with astrophysical observations even though they are obtained with completely different methods.”

Recent progress in multi-messenger astronomy allowed the international research team, involving researchers from Germany, the Netherlands, the US, and Sweden to gain new insights to the fundamental interactions at play in nuclear matter. In an interdisciplinary effort, the researchers included information obtained in heavy-ion collisions into a framework combining astronomical observations of electromagnetic signals, measurements of gravitational waves, and high-performance astrophysics computations with theoretical nuclear physics calculations. Their systematic study combines all these individual disciplines for the first time, pointing to a higher pressure at intermediate densities in neutron stars.

The authors incorporated the information from gold-ion collision experiments performed at GSI Helmholtzzentrum für Schwerionenforschung in Darmstadt as well as at Brookhaven National Laboratory and Lawrence Berkeley National Laboratory in the U.S. in their multi-step procedure that analyses constraints from nuclear theory and astrophysical observations, including neutron star mass measurements through radio observations, information from the Neutron Star Interior Composition Explorer (NICER) mission on the International Space Station (ISS), and multi-messenger observations of binary neutron star mergers.

The nuclear theorists Sabrina Huth and Achim Schwenk from Technical University Darmstadt and Ingo Tews from Los Alamos National Laboratory were key to translating the information gained in heavy-ion collisions to neutron star matter, which is needed to incorporate the astrophysics constraints.

Including data of heavy-ion collisions in the analyses has enabled additional constraints in the density region where nuclear theory and astrophysical observations are less sensitive. This has helped to provide a more complete understanding of dense matter. In the future, improved constraints from heavy-ion collisions can play an important role to bridge nuclear theory and astrophysical observations by providing complementary information. Especially experiments that probe higher densities while reducing the experimental uncertainties have great potential to provide new constraints for neutron star properties. New information on either side can easily be included in the framework to further improve the understanding of dense matter in the coming years.

Provided by Technische Universitat Darmstadt [Note: Materials may be edited for content and length.]