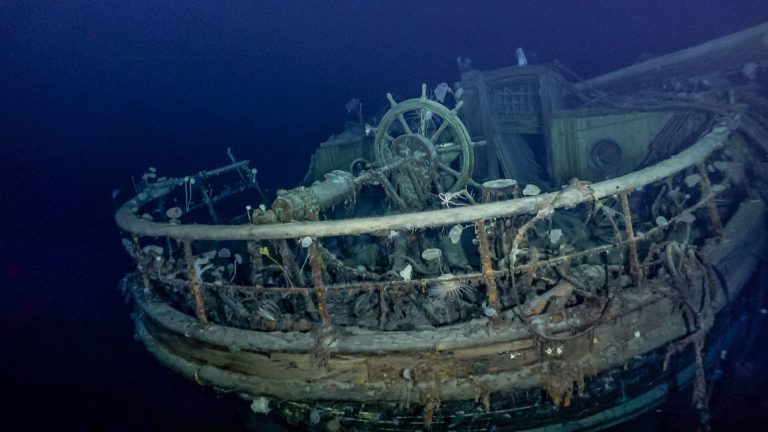 Endurance, one of the world’s most famous shipwrecks, was discovered off the coast of Antarctica more than a century after it sank. Ernest Shackleton’s ship Endurance has been astonishingly intact in the Weddell Sea at a depth of 3,008 meters (9,869 feet), 6 kilometers (4 miles) from where it was wrecked by pack ice in 1915.

The thrilling discovery, made by the Endurance22 Expedition and reported by the Falklands Maritime Heritage Trust, puts a century-old maritime riddle to rest.

Ernest Shackleton, a British adventurer, set out to circumnavigate Antarctica when World War I began in 1914. Shackleton planned to take 27 men on two ships, the Endurance and the Aurora, which would arrive at opposite sites on the continent to examine two routes for sled travel across the ice. However, the Endurance became stranded in ice off the coast of Antarctica in January 1915.

The men had been living on the ship for months when the ice began to crush it gradually. Shackleton gave the order to abandon the Endurance on October 27, 1915. The crew was instructed to take no more than 2 pounds of personal items from the ship; much of the ship’s provisions had already been inaccessible due to shattered hull timbers. On November 21, 1915, the Endurance broke up and sank in the Weddell Sea.

The crew formed a new camp on an ice floe, and all desire to cross Antarctica vanished. The mission had become a survival tale that would last until August 1916, when all the men were rescued.

The Aurora was likewise frozen solid by ice. Before the final members of the crew were rescued in early 1917, three men from that journey died.

An expedition to locate the long-lost ship

For years, biographers and historians have chronicled the tale of the elusive Endurance ship. But the site of the Endurance’s wreckage had remained a mystery — until this year.

The search for the Endurance this year began on February 5 in Cape Town, South Africa.

The expedition leader, John Shears, described the search for the Endurance as “perhaps the most difficult shipwreck search ever performed.”

They looked for two weeks, scanning the sea floor with two submersible vessels over a 150-square-mile area. Then, according to the Times, researchers discovered the first evidence of the shipwreck a few days ago.

According to CNN, The sunken ship was discovered using sonar. It was roughly 4 miles south of the ship’s location, as documented by Captain Frank Worsley in 1915. The crew then deployed an autonomous underwater vehicle equipped with a camera to swim over the hull and deck and verify their findings.

According to specialists, cold Antarctic temperatures have kept the 144-foot, three-masted wooden ship in magnificent shape. Images show that the ship’s name, in large capital letters, is still visible over the stern.

A tale of adventure and a successful expedition

The ship is most prized for two reasons: It is a story worth telling, and it is about a successful search of finding something that has been lost for centuries. The tale of Shackleton’s Imperial Trans-Antarctic expedition has been a tale chronicled by many people.

It was the first attempt at the first land crossing of Antarctica. But due to unforeseen circumstances, the Endurance expedition ship became stuck and wrecked by sea ice, forcing it to abandon the mission.

It is a story of survival and tenacity. Shackleton managed to get his men to safety, which required the Anglo-Irish explorer to take a small lifeboat through treacherous seas to seek assistance.

The expedition and the mission to find the lost vessel are also worth celebrating.

The Weddell Sea is often coated in heavy sea ice, the same sea ice that shattered Endurance’s hull. So getting close to the presumed sinking area is difficult enough, let alone a search.

However, this is also where the FMHT project’s success resides. The lowest extent of the Antarctic sea-ice recorded during the satellite era, which dates back to the 1970s, occurred the month they discovered the wreck. The circumstances were quite favorable.

Under the Antarctic Treaty, the wreck will remain where it was discovered, preserved as a historical landmark and monument. That means the Endurance will not be disturbed while being filmed and surveyed.