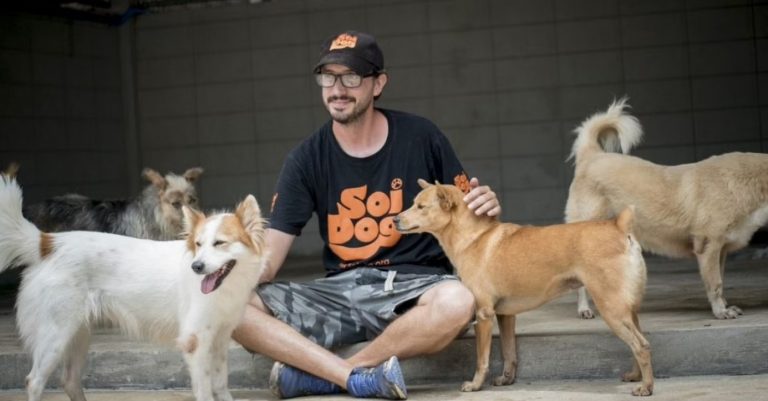 There are too many stray dogs struggling to survive in most major cities. While some manage to find food from leftovers and kind-hearted people, finding a safe shelter is much more difficult. However, a design student in Thailand has devised a unique dog shelter model to safeguard these dogs from all kinds of weather woes.

The student, Ajarn Yossaphon Chanthongjeen, has created recycled billboard-based stray dog shelters. An important aspect of his shelters is that they don’t cost much as thousands of billboards are used by various companies to endorse their products and then are discarded.

The student decided to make use of these billboards to develop his dog shelters. These are both reusable and recyclable. This endeavor once again proves that you do not need to be financially rich to make a difference to others, even if the others are stray dogs.

Ajarn was moved after watching the plight of the stray dogs in his country. First, he saw how the animals suffered in the heat and rain, with almost no shelter made or available for their needs. Then, he thought about the billboards that are used extensively on the roadsides.

Some of the billboards get torn by the wind and sunlight over the years, and then they are discarded. This is how he came up with the handy idea to convert the discarded billboards into dog shelters. The boards are cut to size, attached to a simple frame, and then placed against a wall at an angle to offer the dogs protection against the rain, wind, and scorching summer days.

Since the shelters do not weigh much, they can be moved from one place to another without much effort. A group started by Ajarn called “Stand for Strays” coordinates the project by collecting and setting up the shelters using volunteers.

There is even a place inside to store food for the dogs. The canopy protects the animals from the heat, rain, and wind. The shelter floor is even elevated, so the dogs will not get wet even if heavy rain floods the roads and pavements.

There are many stray dogs in Thailand, and in the capital Bangkok, there are around 300,000. This is a global problem. Some of the dogs are deserted by their owners while many others become feral and reproduce. While the Thai government has taken some steps to make dog registration mandatory, nobody had designed portable shelters for these dogs.

The shelter model, when set up correctly, will help keep these dogs safe from various threats. As a result, they will suffer fewer ailments and thus create fewer health hazards for others. In addition, the billboard panels can be set up by almost anyone anywhere to help protect the dogs.

The dog shelter model serves other purposes as well. First, it looks neat and compact. Since the shelters do not take up much space on the roadsides, they allow people to walk freely past. Repurposing the old billboards means they are not discarded to create waste.

Even pedestrians who are normally afraid of dogs roaming the streets will not feel as weary, as the dogs remain under the canopies much of the day to avoid the heat. The Thailand-developed model can be easily replicated in other countries and can change the lives of millions of stray dogs.