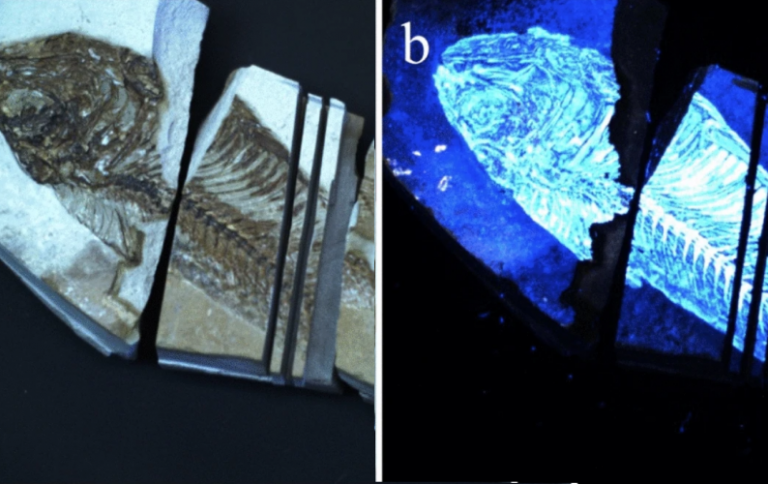 An innovative scientific instrument may be a game-changer in the search for signs of extraterrestrial life. The Compact Color Biofinder, developed by the University of Hawaiʻi at Mānoa researchers, can accurately detect the bio-residue in fish fossils from the 34–56 million-year-old Green River rock formation. The search for extraterrestrial life—which may be existing or fossilized — on planetary bodies is one of the major goals of planetary exploration missions conducted by NASA and other international space agencies.

Most biological materials, for example, amino acids, fossils, sedimentary rocks, plants, microbes, proteins, and lipids, have strong organic fluorescence signals that can be detected by specialized scanning cameras. The researchers used fossils from ancient life on Earth as an analog sample to test the instrument’s ability to detect biomarkers in extinct life. The findings are published in Nature Scientific Reports. Anupam Misra, lead instrument developer and researcher at the Hawai‘i Institute of Geophysics and Planetology at the UH Mānoa School of Ocean and Earth Science and Technology (SOEST), said:

“The Biofinder is the first system of its kind. At present, there is no other equipment that can detect minute amounts of bio-residue on a rock during the daytime. Additional strengths of the Biofinder are that it works from a distance of several meters, takes video, and can quickly scan a large area.”

The Biofinder now has a color version

Though the Biofinder was first developed in 2012 by Misra, advances supported by the NASA PICASSO program culminated in the latest color version of the compact Biofinder. The team tested the Biofinder’s detection abilities on the ancient Green River fish fossils and corroborated the results through laboratory spectroscopy analysis, scanning electron microscopy, and fluorescence lifetime imaging microscopy. Misra said:

“There are some unknowns regarding how quickly bio-residues are replaced by minerals in the fossilization process. However, our findings confirm once more that biological residues can survive millions of years, and that using biofluorescence imaging effectively detects these trace residues in real-time.”

Finding evidence of biological residue in a vast planetary landscape is an enormous challenge, Misra said:

“If the Biofinder were mounted on a rover on Mars or another planet, we would be able to rapidly scan large areas quickly to detect evidence of past life, even if the organism was small, not easy to see with our eyes, and dead for many millions of years. We anticipate that fluorescence imaging will be critical in future NASA missions to detect organics and the existence of life on other planetary bodies.”

Sonia J. Rowley, the team biologist and co-author of the study, said:

“The Biofinder’s capabilities would be critical for NASA’s Planetary Protection program, for the accurate and no-invasive detection of contaminants such as microbes or extraterrestrial biohazards to or from planet Earth.”

Misra and colleagues are applying to have the opportunity to send the Biofinder on a future NASA mission, Misra concluded:

“The detection of such biomarkers would constitute groundbreaking evidence for life outside of planet Earth.”

Provided by Marcie Grabowski, University of Hawaii at Manoa [Note: Materials may be edited for content and length.]