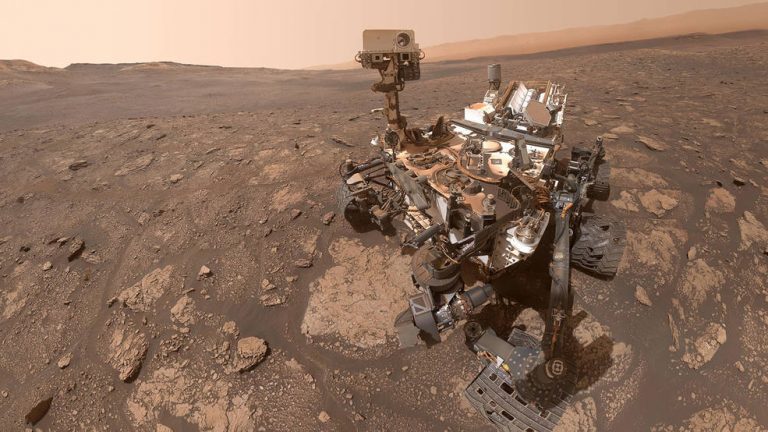 According to a new NASA laboratory experiment, rovers may have to dig about 6.6 feet (two meters) or more under the Martian surface to find signs of ancient life because ionizing radiation from space degrades small molecules such as amino acids relatively quickly.

Amino acids can be created by life and by non-biological chemistry. However, finding certain amino acids on Mars would be considered a potential sign of ancient Martian life because they are widely used by terrestrial life as a component to build proteins. Proteins are essential to life, as they are used to make enzymes that speed up or regulate chemical reactions and make structures. Alexander Pavlov of NASA’s Goddard Space Flight Center in Greenbelt, Maryland, said:

“Our results suggest that amino acids are destroyed by cosmic rays in the Martian surface rocks and regolith at much faster rates than previously thought. Current Mars rover missions drill down to about two inches (around five centimeters). At those depths, it would take only 20 million years to destroy amino acids completely. The addition of perchlorates and water increases the rate of amino acid destruction even further.”

20 million years is a relatively brief amount of time because scientists are looking for evidence of ancient life on the surface that would have been present billions of years ago when Mars was more like Earth. This result suggests a new search strategy for missions that are limited to sampling at shallow depths. Pavlov, lead author of a paper on this research published in Astrobiology, said:

“Missions with shallow drill sampling have to seek recently exposed outcrops – e.g., recent microcraters with ages less than 10 million years or the material ejected from such craters.”

Cosmic rays are high-energy particles (mostly protons and helium ions) generated by powerful events on the Sun and in deep space, such as solar flares and exploding stars. They can degrade or destroy organic molecules when they penetrate yards (meters) into a solid rock, ionizing and destroying everything in their path. Earth’s thick atmosphere and global magnetic field shields the surface from most cosmic rays. In its youth, Mars had these features also but lost this protection as it aged.

There was once water on the surface of Mars, so scientists are looking for organic molecules for signs of ancient life

However, there’s evidence that billions of years ago, the thicker atmosphere allowed liquid water to persist on the surface of the Red Planet. Since liquid water is essential for life, scientists want to know if life emerged on Mars and search for evidence of ancient Martian life by examining Mars rocks for organic molecules such as amino acids. The team mixed several types of amino acids in silica, hydrated silica, or silica and perchlorate to simulate conditions in Martian soil and sealed the samples in test tubes under vacuum conditions to simulate the thin Martian air.

Some samples were kept at room temperature, about the warmest it ever gets on the surface of Mars, while others were chilled to a more typical minus 67 degrees Fahrenheit (minus 55 degrees Celsius). The samples were blasted with various levels of gamma radiation – a type of highly energetic light — to simulate cosmic-ray doses up to that received from about 80 million years of exposure in the Martian surface rocks. The experiment is the first to mix amino acids with simulated Martian soil. Previous experiments tested gamma radiation on pure amino acid samples, but it’s highly unlikely to find a large cluster of a single amino acid in a billion-year-old rock, Pavlov said:

“Our work is the first comprehensive study where the destruction (radiolysis) of a broad range of amino acids was studied under a variety of Mars-relevant factors (temperature, water content, perchlorate abundance) and the rates of radiolysis were compared. It turns out that the addition of silicates and particularly silicates with perchlorates greatly increases the destruction rates of amino acids.”

While amino acids haven’t been found on Mars yet, they have been discovered in meteorites, including one from Mars. Danny Glavin, a co-author of the paper at NASA Goddard, said:

Organic matter has been found on Mars by NASA’s Curiosity and Perseverance rovers; however, it is not a conclusive sign of life since it could have been created by non-biological chemistry. Also, the results of the experiment imply that it is likely that the organic material observed by these rovers has been altered over time by radiation and therefore not as it was when formed.