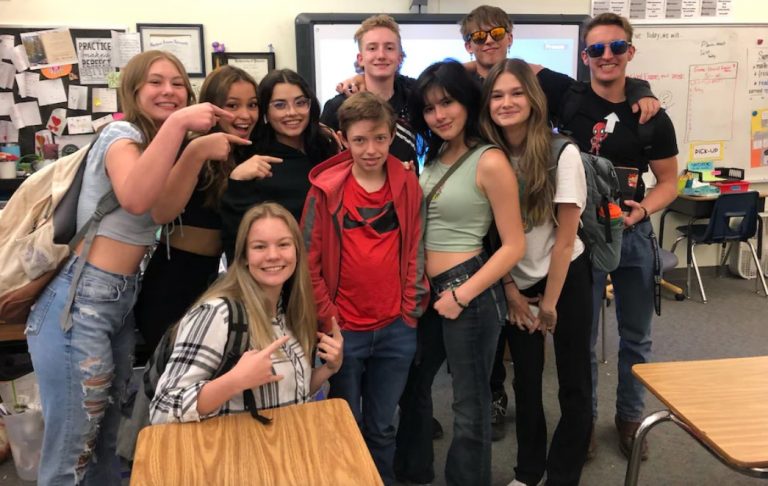 Young students are subjected to various forms of bullying and unfair treatment in their school days. However, for a 12-year boy called Brody Ridder, the older students of his school did the needful to uplift his sagging spirits by signing his yearbook.

The sixth-grader is from Westminster, Colorado. When his mother checked his yearbook, she was pretty disheartened and felt bad for her son. The pages were almost blank, except for two notes added by the teachers. None of his classmates bothered to sign his yearbook.

His mother, Cassandra, decided to do the needful to put a smile back on his face of Brody. So, she posted the images of the empty yearbook on Facebook. The post said: “My poor son. It doesn’t seem like things are getting any better. Two teachers and a total of two students wrote in his yearbook, despite Brody asking many classmates to sign it. So Brody took it upon himself to write to himself. My heart is shattered. Teach your kids kindness.”

It was not only the yearbook issue that made Brody sad, said his mother. Brody was admitted to the Academy of Charter Schools in fifth grade. But, after that, he found it hard to find friends. Some of his classmates bullied him and called him names. After his mother raised a complaint with the school administration, these were reduced to an extent. However, the yearbook issue was distressing.

Cassandra said she posted the images of her son’s empty yearbook so that the parents of other children could see the issue. Unfortunately, while some parents want to keep such matters private, that does not work. In some cases, endless bullying and school-level discrimination make the children depressed or even suicidal.

Cassandra says Brody is interested in things like dinosaurs, chess, and fencing and is often misunderstood by his classmates. As a result, he is often lonely in his class. However, after the Facebook post by his mother, older students stepped up and filled his yearbook with good wishes.

The older students of the school posted loving and endearing messages for Brody. They advised him not to think poorly of himself. After the response given by the older students, his classmates also realized their mistakes, and they also lined up to sign his yearbook. So Brody is in a better state of mind and ready to move to the 7th grade.

The older students lend their support

After the Facebook post was uploaded, Brody’s mom was delighted with the empathy and support shown by the school’s older students. The older students did not know Brody personally, but they understood what he was going through. So they decided to show their support. One of them, Joanna Cooper, said she decided to get more classmates to sign up for the yearbook as no child should have been treated like that.

Joanna, an 11th-grader, contacted several friends, and they went to visit Brody’s homeroom class the day after. The same plan was made by another 11th grader named Simone Lightfoot. Simone said she could relate to the plight faced by Brody as she underwent the same situation when she was a young student.

The impromptu initiative then spread throughout the classes, and the groups of older students turned up to sign the yearbook of Brody. Brody got over 100 signatures eventually.

The older students did not just sign Brody’s yearbook but offered him support and empathy in other ways. They talked with him about his likings and hobbies to cheer up his mood. Even the school administrators were moved by the humanitarian and sweet gesture made by the senior students.

Academy of Charter Schools chief executive Brent Reckman said: “A lot of students are struggling with peer relationships and social skills. It’s up to us to figure out how to help kids and families with it, but it’s a challenge all schools face now. It can be tough to be a teenager. But, I was impressed with how our students stepped up when they saw a needy peer.”