Artist Pays Respect to Victims of the Uvalde, Texas Massacre 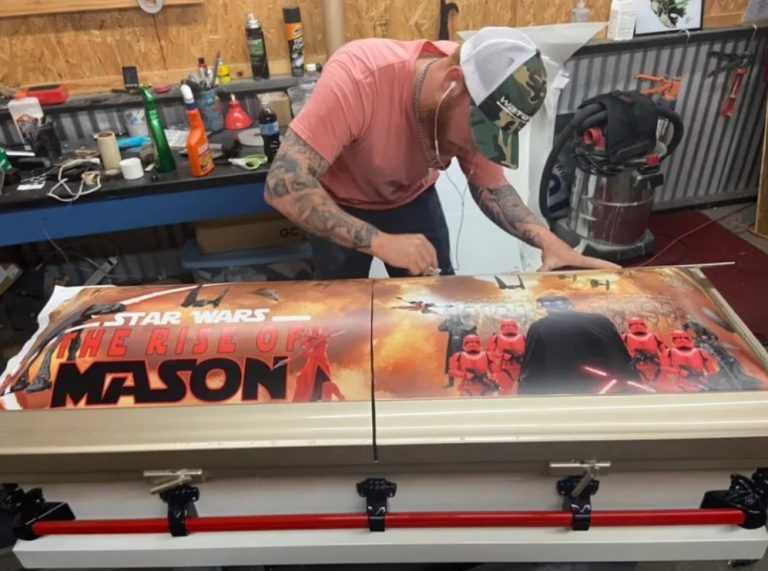 The gruesome massacre that took place at Uvalde, Texas on May 24, 2022, left everyone shocked. The shooting that left several adults and children dead was quite devastating. However, those who lost their loved ones have no choice but to grasp the changed reality and move on with life.

However, one business owner tried to empathize with the family members of the victims and tried to do something that would offer a little relief and peace to the bereaving families. After talking with their families, Trey Ganem decided to make customized caskets for the children who died in the dreadful incident.

The horrible school shooting in Uvalde led to the untimely demise of 19 children. They were all students of Robb Elementary School. While nothing can soothe the pain of losing their children, the act of this business owner proves that humanity is still alive. Trey Ganem is the owner of a Texas-based entity named SoulShine Industries.

The company specializes in making custom caskets. The Texas Funeral Directors Association and a state police trooper approached him to make customized coffins for the children who lost their lives on that tragic day. Ganem was moved and decided to do the needful to offer some relief to the parents of those children. He and his team managed to complete 21 caskets within three days.

Ganem did not make the caskets in a hurry; instead, he met the families of the children killed in the Uvalde massacre and asked about their likings and penchants.

Naturally, the children were interested in various things, including animals and superhero characters. One of the children named Eliahna Torres liked llamas, for example.

Ganem was generous enough to cover the cost of custom-designing these coffins. He has crafted many such customized coffins. He says it gives him a sense of bliss to offer the near ones of a deceased person some relief from their pain and trauma.

So when the funeral director got in touch with him after the school shooting incident, he did not hesitate and started working on the caskets with his team. Working on 19 coffins one after another was far from easy. However, Ganem said he was resolved to wrap up the work quickly.

Ganem admitted the experience of visiting the families of the killed children, getting the details, and then getting to work was mentally draining. But, he said: “It brings a smile to my face because what the families have told me, and what we put on the caskets, TikTok is one of the number one logos; they want a TikTok. They love TikTok.

“We did a dinosaur holding a flashlight and a pickle. The families tell us these things, and we’re like, ‘Do what?’ And I’m like, ‘Did I get that right?’ And they’re laughing, but that’s what they loved.”

He designed one casket with whales and dolphins as the child to be laid in that coffin dreamed of becoming a marine biologist. Another casket was crafted with the image of a popular DC Comics superhero like Superman.

Ganem said that the parents of the children killed in the Uvalde School shooting have responded with compassion and positivity to his endeavor, and he deems that rewarding. In addition, he believes the step of customizing the caskets initiates mental healing in the families.

He added: “We’re bringing light to this time. When they start talking about a dinosaur holding a flashlight with a pickle, that will put a smile on your face. It’s one of those things where we listen to what they say. We cry with them. We hug each other, but in the end, we make the most beautiful creation and the last resting bed for their loved ones.”

He and his team got emotional as they finished all the caskets within the deadline. Ganem also thanked people who collaborated on the project, directly or indirectly.