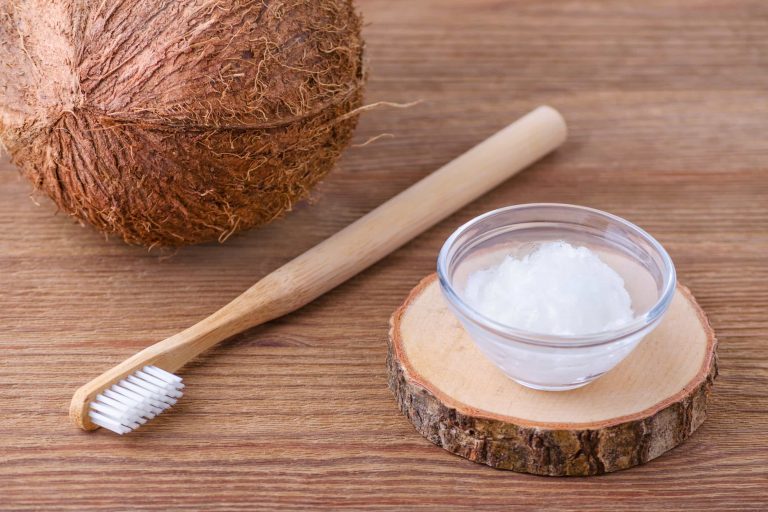 Oil pulling is an ancient practice believed to help remove impurities from the body and a remedy known to improve dental health, freshen breath, and whiten teeth. Recently, coconut oil pulling is increasingly becoming more and more popular, primarily due to its natural properties with no adverse side effects.

What is oil pulling?

Oil pulling is the practice of swishing a type of edible oil to clean and whiten teeth. It is one of the oldest oral health practices in the world, which originated in India as a traditional form of medicine called Ayurveda.

Ayurveda, a natural system of medicine, originated in India more than 3,000 years ago. The term Ayurveda is derived from the Sanskrit words ayur (life) and veda (science or knowledge). Thus, Ayurveda translates to knowledge of life.

How is oil pulling done?

Performing oil pulling is simple, take one tablespoon of coconut oil and measure it out. Olive or sesame oil can also be used. For around 15-20 minutes, swish it around in your mouth. You’ll get every region where bacteria can hide by continually pushing and pulling the oil between your teeth. Avoid swallowing any of the oil.

Doing this gives the oil adequate time to pull out toxins and leave your mouth clean. When you’re done, spit the oil out. If possible, avoid spitting into a sink, as this can cause clogging and accumulation. Next, brush your teeth after rinsing.

What are the benefits of oil pulling?

1. Reduces bacteria in the mouth

Various forms of oral bacteria in your mouth can destroy your teeth and gums. For example, Streptococcus mutans is a bacterium that can cause oral health issues. Biofilm, another type of bacteria commonly known as plaque, causes various problems in the mouth, including gum irritation, cavities, and more. It is formed when bacteria interact with sugars and starches in foods to attack tooth enamel and cause decay.

It’s embarrassing to have bad breath. But at least half of people have foul breath at some point. Medications that dry out the mouth, such as those used during allergy season, might cause bad breath. Certain foods, such as onions, garlic, citrus, alcohol, and seafood, can also cause bad breath.

Poor dental hygiene, infection, and gum disease are common causes of foul breath in people. Bacteria that settle on the tongue in and around the papillae, which are tiny lumps in your tongue, also cause bad breath.

Generally, chlorhexidine or similar antiseptic mouthwash is used to treat foul breath. But did you know that oil pulling also helps treat bad breath? It, according to studies, functions as an antiseptic mouth rinse, killing and eliminating dangerous microorganisms.

In one study, 20 children washed with oil or chlorhexidine had lower germs that cause bad breath levels. Brushing the tongue, in addition to oil pulling, aids in the removal of microorganisms which helps to eliminate foul breath.

Gums can become inflamed and bleed when oral germs and plaque attack the teeth. This condition is called gingivitis, characterized by swollen, red, and bleeding gums. Gingivitis is caused by bacteria found in plaque. Coconut oil, which has anti-inflammatory effects, can help reduce inflammation. Because it reduces germs and plaque that cause gingivitis, oil pulling is an excellent technique to treat inflammation.

Oil pulling can also aid with cavity prevention. Tooth decay can be caused by plaque that hardens into tartar. In addition, several studies have indicated that it helps lower bacteria strains that can cause cavities to form. For example, one study found that participants had reduced amounts of plaque after one week of pulling with coconut oil.

What oil is best for oil pulling?

It is most custom to use coconut or sesame oil according to documented instructions of the oil pulling practice. Olive oil can also be used and even milk. Even extracts made of gooseberry and mangoes have also been documented. In addition, sesame oil and sunflower oil reduce plaque-induced gingivitis.

How often and how long should you oil pull?

Oil pulling 3-5 times per week is a common practice. The more, the better. Most follow this rule of thumb: start with 5 minutes of oil pulling daily. The longer you pull, the more bacteria you remove. However, it takes some getting used to. And since consistency is critical, starting smaller and working your way up is better. Some sources even recommend working up to 20 minutes of oil pulling per session.

Do you brush your teeth before or after oil pulling?

Aside from the benefits listed above, oil pulling also helps to improve oral cavity muscles and strengthens jaw bones. However, it is essential to remember that oil pulling alone is not enough. Good oral hygiene also requires proper daily brushing and flossing habits to keep your breath fresh and pearly whites shiny and maintain your oral health.