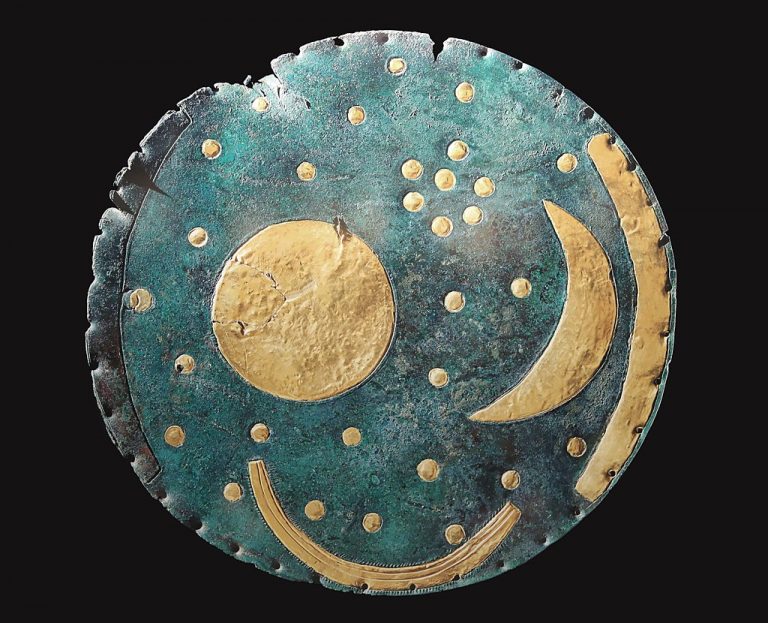 The Nebra Sky Disc is the oldest known map of the cosmos. (Image: via Wikipedia)

In July 2002, a group of amateur treasure hunters in Germany dug in a field with metal detectors when they discovered a bronze disc. The disc was later determined to be the Nebra Sky Disc, the oldest known map of the cosmos. The disc was sold at auction for US$2.3 million.

Why is the Nebra Sky Disc so important?

The Disc is a Bronze Age artifact discovered in Germany in 1999. It has been dated to around 1600 B.C. and is the oldest depiction of the night sky found anywhere. The disc has gold symbols, which may represent different stars and planets. A recent study of the disc has shed new light on ancient astronomy.

The study found that the disc may depict a solar eclipse in 1650 B.C. This would make the Nebra Sky Disc the oldest known depiction of a solar eclipse. It also suggests that ancient people had a more sophisticated understanding of astronomy than previously thought.

The Nebra Sky Disc is a round bronze disc about 30 cm (12 inches) in circumference. It has a hole in the middle and gold, bronze, and copper symbols. It is believed to be over 3,600 years old and contains some of the earliest evidence of astronomy. The disc has been called “one of the most important archaeological finds of the past century” because it sheds new light on ancient astronomy.

Undervalued because of a lack of knowledge

The Nebra Sky Disc was undervalued because the person who found it didn’t know what it represented. When he took it to a local auction house, they estimated its value at around US$500. However, a group of archaeologists recognized the disc and purchased it for US$4,000. As a result, the value of the disc is much higher, with some experts estimating it at US$1 million.

Astronomy was once a purely practical science used for navigation and predicting eclipses. However, the Nebra Sky Disc shows that astronomy also had a religious or ceremonial purpose. It suggests that ancient people saw a connection between the heavens and their own lives.

It may have been used to track lunar eclipses

The researchers used a computer model to reconstruct the ancient sky, and they found that the position of the sun, moon, and stars on the disc matches up with a lunar eclipse that would have been visible from the region where the disc was found. The researchers believe that the Nebra Sky Disc was an eclipse predictor and is the oldest known astronomical tool.

The study of the Nebra Sky Disc is ongoing, and there is still much more to unveil about its origins and purpose. However, the disc has already shed new light on ancient astronomy and will continue to fascinate scholars and historians for years to come.