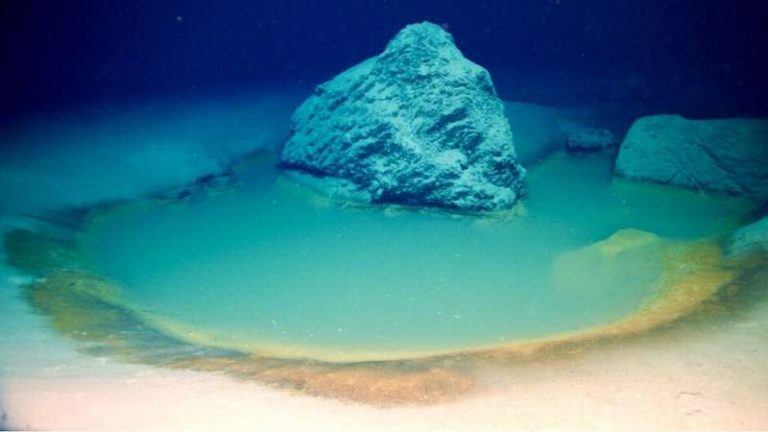 Brine pools are one of the most extreme environments on Earth, yet despite their high salinity, exotic chemistry, and complete lack of oxygen, these pools are teeming with life. (Image: via University of Miami)

Researchers at the University of Miami (UM) Rosenstiel School of Marine and Atmospheric Science recently discovered rare deep-sea brine pools in the Gulf of Aqaba, a northern extension to the Red Sea. These salty underwater lakes hold secrets into the way oceans on Earth formed millions of years ago, and offer clues to life on other planets.

In partnership with OceanX, Sam Purkis, professor and chair of the UM Department of Marine Geosciences, and his team made their discovery more than one mile beneath the sea surface (1,770 meters) using a remotely operated underwater vehicle (ROV) on the OceanXplorer, OceanX’s highly equipped marine research vessel capable of exploring the most unreachable places on Earth. Purkis said:

Brine pools are teeming with life

Brine pools are one of the most extreme environments on Earth, yet despite their high salinity, exotic chemistry, and complete lack of oxygen, these brine pools are teeming with life. Bioactive molecules with potential anticancer properties have previously been isolated from brine pool microbes in the Red Sea. The research, published in Nature Communications, is the first discovery of brine pools in the Gulf of Aqaba. Purkis said:

“We were very lucky. The discovery came in the last five minutes of the ten-hour ROV dive that we could dedicate to this project.”

Located close to the coastline, these extremely salty, zero oxygen pools preserve information on tsunamis, flash floods, and earthquakes in the Gulf of Aqaba that took place thousands of years ago. Many faults and fractures in the seabed are associated with the region’s tectonics in this area of the Gulf of Aqaba. Earlier this year, Purkis and his team discovered evidence of a 500-year-old submarine landslide that likely spawned a sizable tsunami in the region, which could have implications for coastline development in Egypt and Saudi Arabia.

Provided by Diana Udel, University of Miami [Note: Materials may be edited for content and length.]