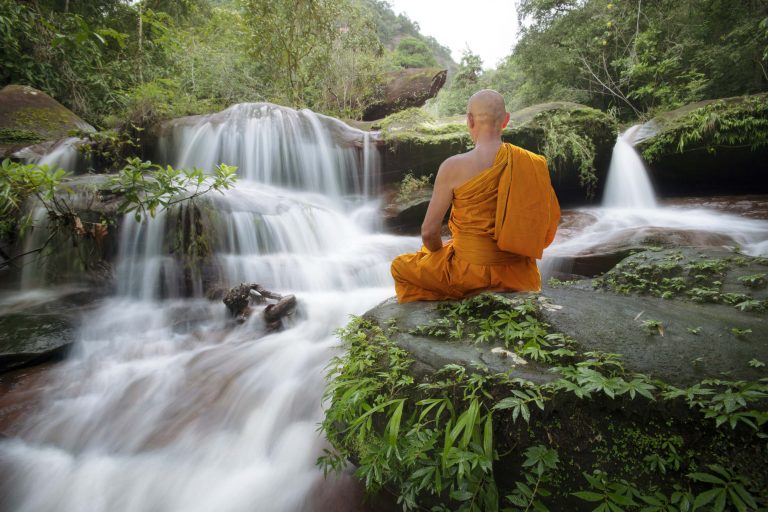 A monk sitting by a waterfall in meditation. (Image: Ittipon via Dreamstime)

The framing of Monk Jingman

In ancient China, under the reign of Queen Wu Zetian during the Tang Dynasty (A.D. 624-715), there lived a monk named Jingman who resided in Luquan Temple, Heng County. Monk Jingman was very upright, strictly followed the precepts of Buddhism, and conducted himself well.

However, other monks in the temple lacked self-discipline and became quite jealous, feeling that Jingman’s exemplary behavior was a thorn in their sides. They were afraid that they would be expected to follow Jingman’s example and lead an ascetic life, in which case donations to the temple would decrease. The monks thus devised a plan to blackmail Jingman in order to have him expelled from the temple.

In the practice of Buddhism, the most important precept is that of refraining from sexual relations. Knowing this, the monks devised a scheme against Jingman targeting this precept. The monks first made a painting of a beautiful lady looking down from a high building, with Jingman shooting an arrow toward the building to deliver a love letter to the great beauty. The monks then sent an unworthy disciple of Jingman’s to the court to falsely accuse him of trying to seduce women, something unbefitting of a monk’s conduct.

A thorough investigation into the monk’s behavior

After seeing the supposed evidence and hearing from the witness, Queen Wu Zetian became furious. She demanded that the Imperial Censor Pei Huaigu investigate the case, and that Monk Jingman be arrested and beheaded when found guilty.

Rather than investigate the case hastily, Pei Huaigu looked into the matter thoroughly and discovered that Jingman had done nothing wrong, but instead had been framed. Pei immediately released Jingman and then punished the monks involved in the set-up.

When Queen Wu Zetian heard of Pei Huaigu’s decision to release Jingman, she was both surprised and angered. The verdict was contrary to her order, and she blamed Pei Huaigu for releasing a guilty prisoner, and even threatened that Pei Huaigu should be jailed too.

Despite the threat, Pei Huaigu refused to change his verdict, telling the queen: “The law enacted and issued by Her Majesty should be followed by everyone. Why should I be required to kill innocent people, something that is against the law? Had Jingman really violated the law, how would I have the nerve to release him? My practice is based on the law, which means not wronging anyone, and not punishing the innocent. Even if this costs me my life, I will never regret it!” Queen Wu Zetian finally understood the situation, and let Pei go.

Pei Huaigu later went on to serve as an assistant envoy to Turkey in negotiating a marriage. The Turkish King arrested all the envoys from the Tang Dynasty, including Pei, and forced them to serve in Turkey. Pei Huaigu did not surrender, and said: “I would rather die and keep my loyalty to my country intact than betray my country in order to save my life.” At the last moment, Pei’s life was spared, and he was instead jailed in the army.

During the Turkish army’s march south to invade China’s Zao County and Ding County, Pei Huaigu made a daring escape. After a while, Pei became too tired to walk any further and lay down to take a nap. He immediately had a dream in which a monk who looked like Jingman pointed in a certain direction and said: “Take this path.” When Pei awakened, he followed the direction from his dream and was able to avoid the main road where soldiers were searching for him.

After trudging through many valleys, Pei Huaigu finally returned safely home to China. At the time, people said that Pei experienced miracles and escaped death several times, all because he did the right things — being loyal to his country, upholding the law, and helping secure justice for Monk Jingman.

As a result of his good deeds and actions, Pei Huaigu was blessed and protected by divine beings.