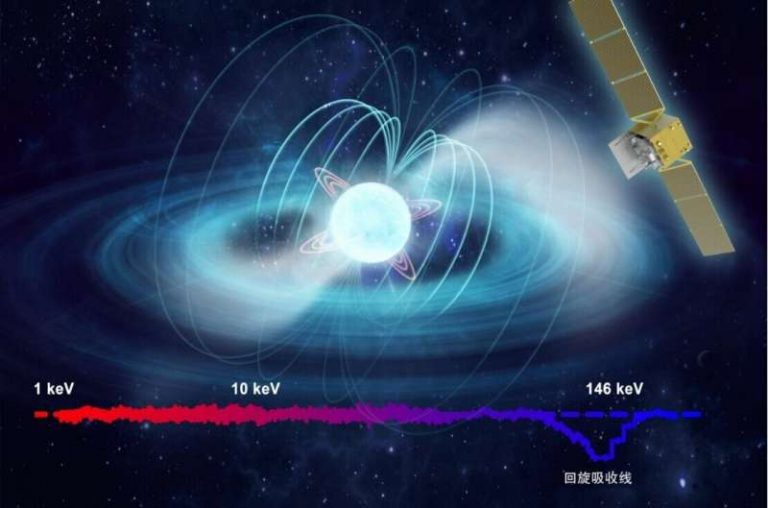 The findings, obtained jointly by the Key Laboratory for Particle Astrophysics at the Institute of High Energy Physics (IHEP) of the Chinese Academy of Sciences and the Institute for Astronomy and Astrophysics, Kepler Center for Astro and Particle Physics, University of Tübingen (IAAT), were published in Astrophysical Journal Letters (ApJL). Dr. KONG Lingda, Prof. ZHANG Shu, and Prof. ZHANG Shuangnan from IHEP are the corresponding authors of the paper. Dr. Victor Doroshenko and Prof. Andrea Santangelo from the University of Tübingen significantly contributed to the discovery. A neutron star X-ray binary system consists of a neutron star and its companion star. Under the strong gravitational force of the neutron star, the gas of the companion star falls towards the neutron star, forming an accretion disk.

The plasma in the accretion disk will fall along magnetic lines to the neutron star’s surface, where powerful X-ray radiation is released. Along with the rotation of the neutron star, such emissions result in periodic X-ray pulse signals, hence the name “X-ray accretion pulsar” for these objects. Many observations have revealed that these types of objects have absorption structures in their X-ray radiation spectra, namely cyclotron absorption lines, which are thought to be caused by resonant scattering and thus the absorption of X-rays by electrons moving along the strong magnetic fields. The energy of the absorption structure corresponds to the strength of the surface magnetic field of a neutron star; therefore, this phenomenon can be used to directly measure the strength of the magnetic field near the surface of the neutron star.

The strongest magnetic field ever measured

Ultraluminous X-ray pulsars are a class of objects whose X-ray luminosity far exceeds that of canonical X-ray accreting pulsars. They have previously been discovered in several galaxies far from the Milky Way. Astronomers have speculated that their pulsars have high magnetic field strengths even though direct measurement evidence is still lacking. Insight-HXMT made detailed and broadband observations of the outburst of Swift J0243.6+6124, the Milky Way’s first ultraluminous X-ray pulsar, and unambiguously discovered its cyclotron absorption line. This line revealed energy up to 146 keV (with a detection significance of about 10 times the standard deviation), which corresponds to a surface magnetic field of more than 1.6 billion Tesla. This is not only the strongest magnetic field directly measured in the universe to date, but also the first detection of an electron cyclotron absorption line in an ultraluminous X-ray source, thus providing a direct measurement of the neutron star’s surface magnetic field.

Insight-HXMT is the first Chinese X-ray astronomy satellite. It comprises scientific payloads including a high-energy telescope, medium-energy telescope, low-energy telescope, and a space environment monitor. Insight-HXMT has advantages over other X-ray satellites in terms of broadband (1-250 keV) spectral coverage, large effective area at high energies, high time resolution, low dead-time, and no pile-up effects for bright sources, thus opening up a new window for observing black holes, neutron stars with hard X-ray fast transitions, and energy spectrum studies. In 2020, the Insight-HXMT team reported the detection of a 90 keV cyclotron absorption line from a neutron star in the X-ray binary system GRO J1008-57, corresponding to a surface magnetic field of 1 billion Tesla, which set a world record for direct measurement of the universe’s strongest magnetic field at the time. Later, a new record for a cyclotron absorption line—with its highest energy around 100 keV—was detected by Insight-HXMT from another neutron star in 1A 0535+262. Insight-HXMT has demonstrated its exceptional capacity to explore the energy spectrum by breaking its own records for cyclotron absorption line discoveries.

Insight-HXMT was proposed by Prof. LI Tipei and Prof. WU Mei in 1993 at IHEP and was successfully launched on June 15, 2017. Its development is supported by the China National Space Administration and CAS. IHEP was responsible for satellite payloads, ground segments, and scientific research for this mission. The China Academy of Space Technology was responsible for the satellite system. Tsinghua University participated in the development of payload and ground segments. The National Space Science Center and Beijing Normal University were also involved in the mission. The calibration of the detectors on board Insight-HXMT was supported by the National Institute of Metrology, Ferrara University in Italy, and the Max Planck Institute for Extraterrestrial Physics.

Provided by Chinese Academy of Sciences [Note: Materials may be edited for content and length.]