The Scandal of Arnold Schoenberg’s Skandalkonzert of 1913 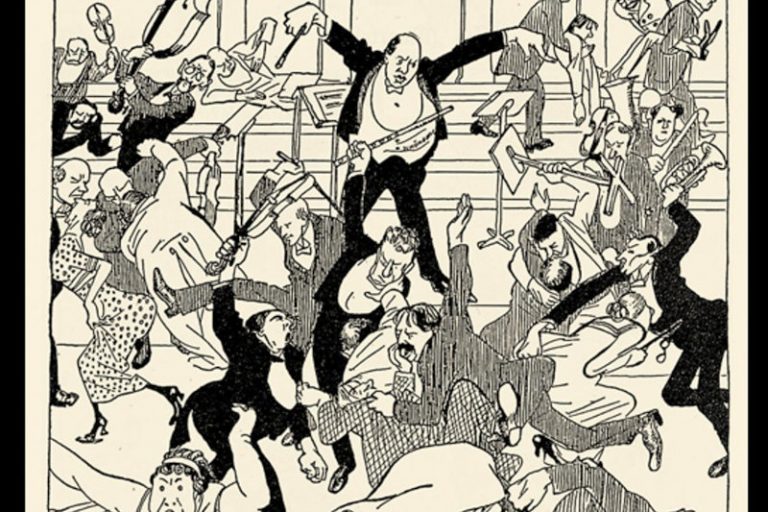 When expressionist and modern music was presented to a crowd in Vienna expecting to hear classical music, the experimentalism shocked and outraged listeners. (Image: via Public Domain)

You may have heard of mosh pits, places at concerts where fans can engage in an extreme form of dancing to express their enthusiasm for the aggressive music being performed. Critics argue that this behavior is angsty and highly risky, and it is not reminiscent of sincere love for music. Injuries are common and deaths have even occurred. Arnold Schoenberg’s Skandalkonzert is where this all started.

But apparently, different people have different tastes. A reporter for The Guardian reminisces: “My teenage years were spent getting bashed around in beer-fuelled moshpits. My long hair would get pulled, my cardigan torn, my arms bruised … and I loved it.”

In a way, you could look at Arnold Schoenberg’s classical music concert in Vienna as the first ever to have a mosh pit — though what happened was actually more of a riot. As a result, the performance became known as the Skandalkonzert of 1913.

It has been considered an unfortunate turning point in classical music history for over a hundred years. So what exactly happened at that infamous concert? And why is it considered so groundbreaking? Keep reading to learn more.

What went down in the Skandalkonzert

The reason the before-mentioned concert went down in history as scandalous is a result of a combination of things.

Firstly, the venue. The Skandalkonzert, or Scandal Concert, of 1913 took place in Vienna’s “The Wiener Musikverein” on March 31, 1913. With its architectural acoustics and aesthetic appreciation, the place is frequently recognized as the best music hall in the world.

Secondly, the composers. The concert was meant to be for the Second Viennese School composers to showcase their compositions. Five composers were in the lineup: Anton Weber, Alexander von Zemlinsky, Arnold Schoenberg, Alban Berg, and Gustav Mahler. Arnold Schoenberg was the one who conducted the concert.

Lastly, the people and the music. Members of the Viennese high society attended the event, unaware they were about to be subjected to a new experimental kind of music instead of the classical music they were expecting.

Put together, the result was an audience irritated and offended, resulting in the Musikverein involuntarily changing into a mosh pit.

Who was Arnold Schoenberg?

You might be thinking, who was Arnold Schoenberg, and what type of music did he perform to invoke such outrage and anger? This will be discussed shortly.

Arnold Schoenberg (Schönberg) was a composer of Austrian descent who impacted classical music in the 20th century. He dedicated his life to finding his artistic voice. German approaches mainly affected him, particularly atonality (music without a fixed key). He was one of the pioneers of the twelve-tone technique, or serialism.

Music critics and aesthetics will understandably claim that serialism in music is no different from what the works of Picasso are in art, as both could mistakenly be taken as results of adolescent children if one did not know who the artist was.

Despite his work not being accepted due to its grotesque undertone, Schoenberg persisted, and his influence changed how classical music was composed.

What is expressionism in music?

Now, about the music. The type of music that made the Viennese high society mad is known as expressionism.

According to Theburningofrome.com, the form is described as having “a high level of dissonance.” Expressionism attempts to convey the songwriter’s emotional experiences to the audience, with an emphasis on the inner turmoil and dread that reside in the subconscious mind. Expressionism in music encourages harsh discord, severe distortion, and disharmony.

Now, what caused the riot?

The tipping point was Alban Berg’s Fünf Orchesterlieder nach Ansichtskarten von Peter Altenberg. However, different people have different tastes and the audience’s reaction to the music was split. A sizable percentage of them were astonished and indignant by the experimentalism of the music.

In fact, the response split the crowd so severely, that rioting and fighting broke out. Many believed that the music was horrifying and bizarre. The discontent and rage led to the concert’s cancellation right before Gustav Mahler’s piece. Schoenberg’s supporters clashed with people who believed the event was an insult to decorum.

Additionally, the riot resulted in breaking furniture and throwing blows. Erhard Buschbeck, the concert’s organizer, actually slapped a concertgoer in the face, earning the Skandalkonzert its other name, the Watschenkonzert, or “slap concert.” One witness proclaimed that the slap had actually made the most harmonious sound he had heard the entire evening.

Schoenberg’s take on the Skandalkonzert

After the concert, Schoenberg talked to Die Zeit newspaper and discussed the Skandalkonzert. He said that he felt the whole debacle violated the law. Schoenberg also said: “A ticket to a concert only extends the right to hear the concert — not to disrupt the proceedings.” The composer also added that paying for the concert doesn’t permit anyone to act indecently.

Not everyone will enjoy “new” music. The audience was unfamiliar with atonality and dissonance at the turn of the 20th century. They did not expect, nor perhaps did they want, to be made to experience the composer’s inner turmoil. Up until then, when a piece of music was created, it was well-tempered and based on the teachings of harmony.

Musicians would compose with a sense of beauty in their minds and a sincere longing to share positive emotions and sensations as vividly as possible with the audience.

Like many fine arts, music was traditionally meant to please the senses and treat the viewer or listener to a sensation of beauty, harmony, and the divine. These are all abstract and intangible concepts until they are manifested by an artist or composer in a work of fine art.

To an audience that paid to enjoy a sensual delight and spend some meaningful time together at an event, the disharmony of the Skandalkonzert must have seemed grotesque and insulting indeed.