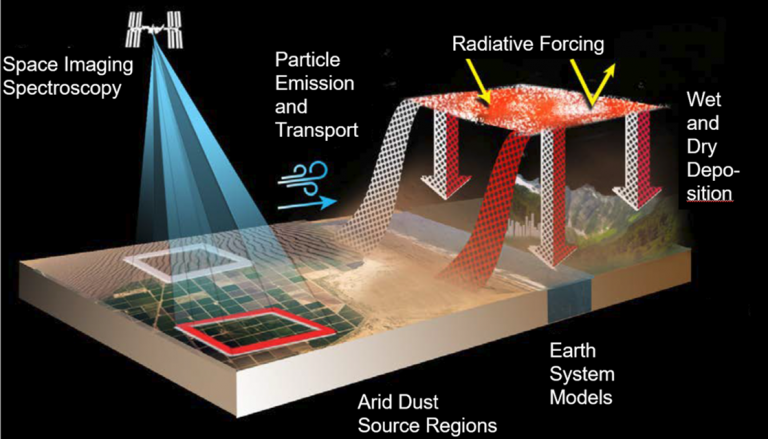 Mineral dust blown into the air is an important part of the Earth's system. Wind blows dust into the atmosphere from desert regions around the world, and can carry dust across oceans. Dark minerals that absorb sunlight can warm the Earth, while light-colored minerals can cool the Earth. By accurately mapping the composition of areas that produce mineral dust, EMIT will advance our understanding of dust’s effects throughout the Earth system and to human populations now and in the future. (Image: via NASA)

After being installed on the exterior of the International Space Station, NASA’s Earth Surface Mineral Dust Source Investigation (EMIT) mission has provided its first view of Earth. The milestone, called “first light,” took place at 7:51 p.m. PDT (10:51 p.m. EDT) on July 27 as the space station passed over Western Australia.

Developed by NASA’s Jet Propulsion Laboratory in Southern California, EMIT is focused on mapping the mineral dust composition of Earth’s arid regions to better understand how dust affects climate heating and cooling. The instrument works by measuring the hundreds of wavelengths of light reflected from materials on Earth. Different substances reflect different wavelengths of light, producing a kind of spectral fingerprint that, when collected by an imaging spectrometer and analyzed by researchers, reveals what they are made of.

Ground controllers used the Canadarm2 robotic arm of the space station to remove EMIT from a Dragon spacecraft and install it on the outside of the station, a process that began on July 22 and took more than 40 hours. Engineers powered up the instrument on July 24 and cooled it to its operating temperature over the next 72 hours.

The EMIT team then collected the instrument’s first measurements, creating something called an image cube. The image at the front of the cube shows a mix of materials in Western Australia, including exposed soil (brown), vegetation (dark green), agricultural fields (light green), a small river, and clouds. The rainbow colors extending through the main part of the cube are the spectral fingerprints from corresponding spots in the front image.

While the EMIT instrument can measure the spectral signature of light from such materials as vegetation, rocks, snow and ice, and human-made surfaces, its primary mission, beginning in August, will be to collect measurements of 10 important surface minerals (hematite, calcite, dolomite, and gypsum, for example) in arid, dust-producing regions of Africa, Asia, North and South America, and Australia.

The spectral fingerprints of dust minerals allow scientists to determine their composition. While dark, iron-rich particles strongly absorb the Sun’s energy, light-colored clays reflect it. Right now, scientists don’t know whether mineral dust has a cumulative heating or cooling effect on the planet. The full spectral fingerprints that EMIT collects will help answer that question.