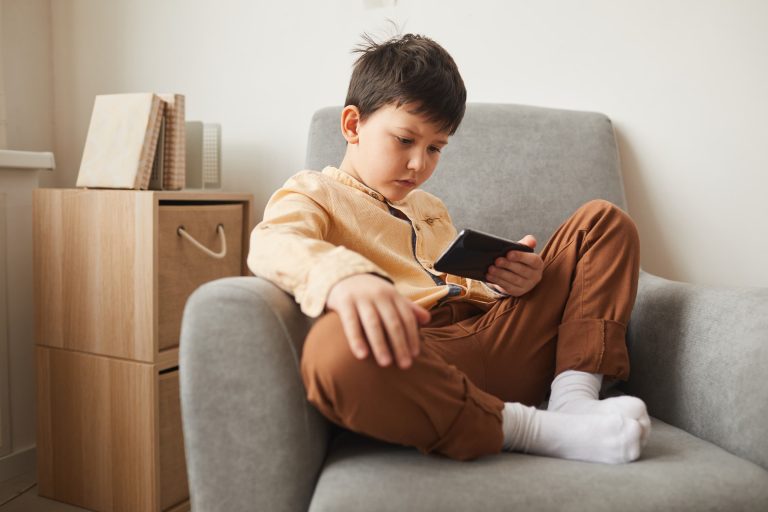 The world is ever-evolving, and technology is used in our daily life. (Image: via envatoelements)

Smartphones for children are a terrific way to reach out to children as they grow more autonomous. After all, real-time information on their location and itinerary changes can’t be seen at a glance.

According to a Today article about how widespread smartphones are among different age groups, “37 percent of 11-year-olds have a smartphone, and 91 percent of 14-year-olds have one.” The pandemic changed how children learn and spend their free time and has reportedly increased screen time across all ages.

Parents used to drag their Gen X children away from the television. Internet for Millennials was limited to stationary desktop computers. But, now that technology is so prevalent, setting and maintaining reasonable boundaries around it is much more challenging. The proliferation of smartphones, in particular, is a severe issue, and parents are frequently asked: “At what age should a child receive a smartphone?”

Smartphones provide unrestricted internet access, which has advantages and disadvantages. Parents must decide if their children are mature enough to reap the benefits while avoiding the negatives. This article will clarify and help you answer the question about the right age for giving your child their first smartphone.

Advantages of smartphones for children

Obtaining a cell phone or smartphone has become a watershed moment for many children, allowing them to blend in with their peers while gaining their parent’s trust because of their ability to reach them and monitor their whereabouts (if needed).

Technology allows a child to remain competitive in an increasingly connected culture. Regarding safety, cell phones can help you find your child using the GPS function in an emergency. Security is essential for adolescent drivers, but there is a case for younger children to have their devices. And, as your child may have pointed out, your smartphone data plan most likely qualifies for a couple of extra lines.

Besides security and safety, there may be other reasons that seem to recommend a smartphone for children

Disadvantages of your child’s smartphone

With so many children and teenagers carrying cell phones, families are wrestling with some drawbacks of the constant distraction caused by technology.

Here are some of the most significant concerns regarding children and smartphones.

Cell phones and Smartphones are adding to the difficulty as if getting your child to bed wasn’t tricky enough. Studies have identified a significant correlation between using cell phones and obtaining less sleep in adolescents. According to a 2014 survey, 80 percent of children use their phones while they should be asleep. Teens who do not get enough sleep may do poorly in school and are more likely to become obese.

Cell phones can put your youngster in danger of getting in trouble (after all, there isn’t a phone for children only) if they send, share, or receive indecent images. A youngster may also make prank calls or be accused if a classmate steals their phone and makes foul calls on their behalf.

It would be best to determine whether your youngster is ready for a smartphone. Before purchasing a child’s phone, ensure that your youngster can handle the responsibilities. Consider imposing restrictions on your younger child’s cell phone use. As an example:

What is the best first cell phone for a child?

According to online reviews, there are five categories in which a phone stands out due to a feature that puts it above the rest in that category.

The KidiCom Chat app on the VTech KidiBuzz 3 allows a child to share photos, videos, text, and voice messages with girlfriends, boyfriends, and family members. This child’s cell phone is not just smart. It’s also easy to use.

According to safe wise, “the Verizon GizmoWatch 2 is an excellent choice for a child who is too young for a phone, but still requires a way to contact their parents. It also helps parents monitor their child’s newly found independence with GPS features.”

This is a more advanced children’s phone solution. First, you’ll need to ensure your child has their own Apple ID. An Apple ID is the account that you use with messages, access the App Store, and other Apple services. It will also allow you to access features like sharing location. You and your child can then share your whereabouts and even open maps to get the fastest route to one another.

Apple offers child account restrictions where you can restrict anything from an app to URLs.

The KidsConnect KC2 is a type of tracker phone. Your child has three buttons on it with pre-saved numbers for fast dialing. This child’s phone is more of a parent’s “All In One Security Solution.” The GeoFencing feature included allows parents to set 5 predetermined geographical areas. Parents will get an alert if their child enters or leaves a site.

While the Palm is not directly made for a child, like the iPhone8, due to its super simplistic, trim, and durable features, it is the perfect smartphone for little hands and small pockets. In addition, it’s about the size of a credit card and dust and waterproof.

But on the other hand, giving a child the trust and guidance at a younger age may mature them sooner and give them the necessary moral and conscious filter to circumvent the pitfalls of the internet.